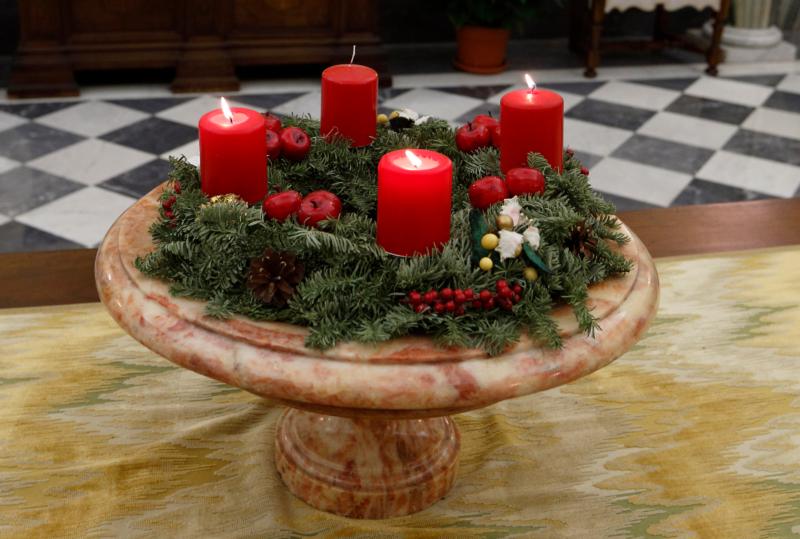 An Advent wreath decorates the Apostolic Palace at the Vatican Dec. 14, 2015. Catholics regard Advent as a season of preparation and expectation, of promise and hope. (CNS photo/Paul Haring)

Since its fourth-century origins in Western Europe, the season of Advent has undergone various configurations, purposes and focuses depending on who was celebrating it, where, how and why.

In 380, the council of Saragossa in Spain declared that Christians were obliged to attend church daily from Dec. 17 to Jan. 6, the feast of the Epiphany. During the following century, fasting on three days of each week from the feast of St. Martin of Tours (Nov. 11) through Christmas was mandated by church authorities in Gaul.

And early Advent observances had a penitential focus, much like Lent, complete with the color purple, the exclusion of the Gloria and alleluia from the liturgy and, for catechumens, their preparation for baptism at Epiphany.

Over time, however, church leadership in Rome — mindful of Easter’s pre-eminence in the life of the faithful — restored the alleluia to Advent’s Sunday liturgies, and emphasized Jesus’ return as foretold in Scripture (long before Jesus’ birth was connected to the season).

Today, Catholics regard Advent as a season of preparation and expectation, of promise and hope — and not of penitence.

Because, although penance services are a staple of many parish Advent observances, penitential action isn’t anything Catholics aren’t already doing regularly. The penitential rite of every Sunday liturgy calls us to conversion — to examine our consciences, to cleanse our souls — so we may truly welcome and receive Christ into our hearts and our lives.

Thus, Advent focuses on directing our hearts and minds to the return of the risen Christ into our world (regardless of how much we may care to focus on the sweeter, gentler aspect of welcoming and receiving the Christ Child on Christmas Day).

Our Advent prayer of longing, “Maranatha,” rooted in early Christian liturgy, means “Come, Lord.” The very word “Advent” derives from the Latin “ad-venire,” meaning “to come to” (other sources cite the Latin “adventus,” or a “coming,” from the Greek word “parousia,” defined as “presence” or “arrival”).

By either definition, the word addresses “the Advent of God’s kingdom,” as St. Leo the Great suggested in a mid-fifth-century homily during his pontificate. Jesus, St. Leo said, regularly taught his apostles to focus on what we today might call “the big picture”: the second coming, citing the Gospel of St. Luke 21:34-36:

“Beware,” Jesus said, “that your hearts do not become drowsy from carousing and drunkenness and the anxieties of daily life, and that day catch you by surprise like a trap. For that day will assault everyone who lives on the face of the earth. Be vigilant at all times.”

Sixteen centuries later, we receive the same message on the first Sunday of Advent in this new liturgical year’s Gospel reading from St. Matthew.

Jesus is speaking to his disciples shortly after he enters Jerusalem, and just prior to his crucifixion and resurrection, events that caught his disciples (and most everyone else) quite off guard. He reminds them of the world’s foolishness in the time of Noah, and of the woes that await those who are unprepared for the coming of the Son of Man.

“Therefore, stay awake!” Jesus warns his listeners. “For you do not know on which day your Lord will come” (Mt 24:42).

The setting of this reading, combined with those on the following Sundays of Advent, reiterates the important point that this liturgical season, like every other, is linked to the paschal mystery, the dying and rising of Our Lord.

The readings themselves are preceded by a collect that is both prayer and exhortation: “Grant your faithful, we pray, almighty God, the resolve to run forth to meet your Christ with righteous deeds at his coming, so that, gathered at his right hand, they may be worthy to possess the heavenly kingdom.”

These readings and prayers suggest that Advent is a season of expectation as well as preparation. The Catechism of the Catholic Church makes this point clearly:

“When the church celebrates the liturgy of Advent each year, she makes present this ancient expectancy of the Messiah, for by sharing in the long preparation for the savior’s first coming, the faithful renew their ardent desire for his second coming. By celebrating the precursor’s birth and martyrdom, the church unites herself to his desire: ‘He must increase, but I must decrease'” (No. 524).

The “precursor,” of course, is John the Baptist from whom we hear more later in the Advent season — “a voice of one crying out in the desert,” as he too calls for all to prepare, for “the one who is coming after me is mightier than I” (Mt 3:11).

And the coming to which John refers should not be new information to God’s people.

“The coming of God’s Son to earth is an event of such immensity that God willed to prepare for it over centuries,” the catechism points out (No. 522). “He announces him through the mouths of the prophets who succeeded one another in Israel. Moreover, he awakens in the hearts of the pagans a dim expectation of this coming.”

To be awakened in heart. This is our hope for which we prepare every week — starting with Advent.

PREVIOUS: Christ, our king, shows us how to love

NEXT: Work hard to prepare the way — it is worth it