Work hard to prepare the way — it is worth it 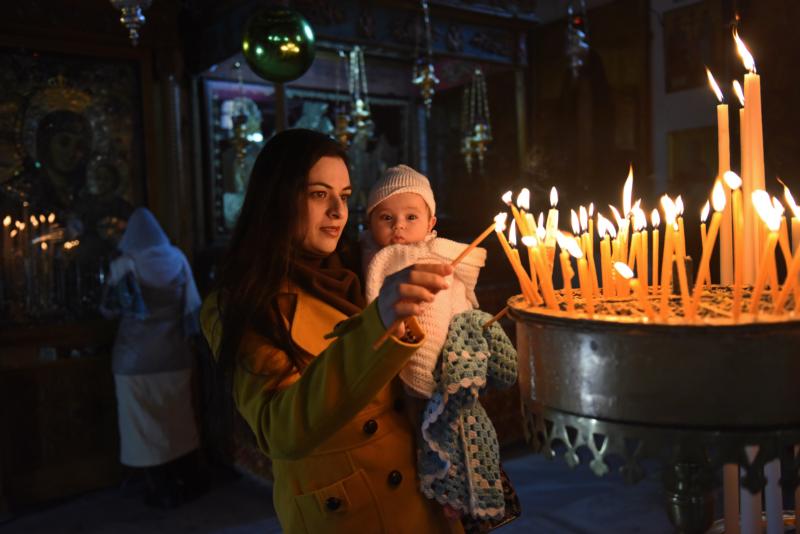 Palestinian Manan Abu Abuayash holds her baby Maram, 6 months, while lighting candles Dec. 20, 2015, in the Church of the Nativity where tradition believes Christ was born in Bethlehem, West Bank. Advent is a time of anticipation. (CNS photo/Debbie Hill)

Advent is a time of anticipation, for someone even bigger than Santa Claus is coming to town.

First, some groundwork had to be laid — a slow, gradual preparation of humanity to get it ready for the historic encounter with its Savior. There were some ideas about God and his plan that had to be gotten across. Moses was entrusted with the lion’s share of that job.

But besides this intellectual preparation, there had to be spiritual and moral preparation as well. Calling the people of God to holiness was the specialty of the prophets and, given the magnitude of their job, there were many of them — Jeremiah, Amos, Hosea and Zechariah, to name a few.

God spoke both stern and comforting words through these prophets.

Isaiah 40, for example, begins with comfort: “Speak to the heart of Jerusalem, and proclaim to her that her service has ended, that her guilt is expiated” (Is 40:2). Captivity is over, God is coming to the rescue, to feed his flock like a shepherd.

Yet Isaiah goes on to say that a road in the desert must be prepared for this coming. Valleys must be filled in. Mountains leveled. Crooked ways made straight.

Actually, it would be easier if all we had to do was literally dynamite some mountainside. But the last and greatest of the prophets, John the Baptist, helps us understand the true meaning of Isaiah’s words. The prep work needs to be done in us, not in sand and gravel.

If the Messiah is to come, the way must be leveled and straightened. The heights blocking his approach are mountains of pride. Pride exalts itself higher than God, erecting a barrier against him. The tower of Babel is a great example of pride’s futile loftiness.

But how about the valleys needing to be filled?

Philosophers and theologians define evil as the privation of good, the lack of something that ought to be there. Lack of faith is a sin. Lack of charity is a sin. Such sins of omission are gaping holes needing to be filled to make a highway for our God.

John the Baptist lived his message. The mountains of pride had been leveled in him. He pointed not to himself but to him whose sandal strap, he says, he is not fit to untie. “I have baptized you in water; he will baptize you in the Holy Spirit” (Mk 1:8).

The Messiah was coming to utterly immerse us in the power and wisdom of God, to make us new people, able to be like God, to do new and great things.

This is, without a doubt, something worth preparing for.

D’Ambrosio is co-founder of Crossroads Productions, an apostolate of Catholic renewal and evangelization.

PREVIOUS: Advent has changed with the centuries but its focus remains on Christ

NEXT: Start a new family tradition this Advent