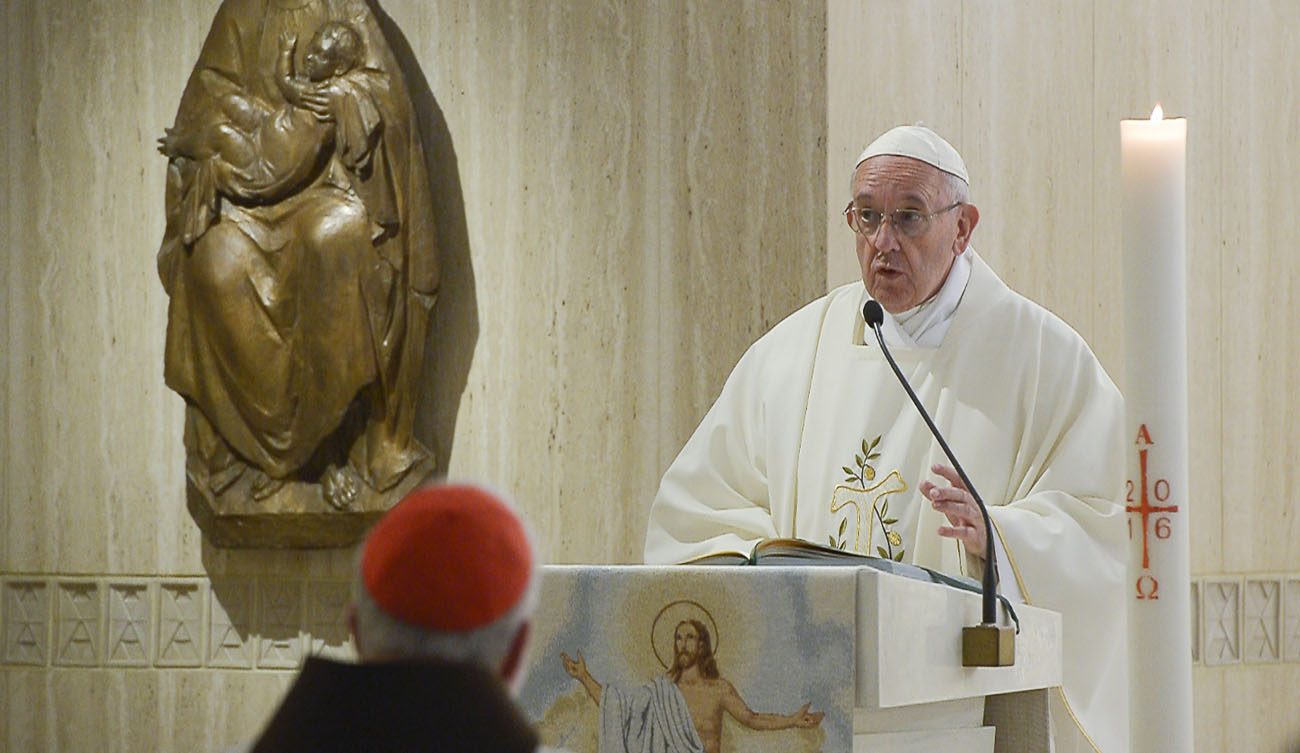 Pope Francis gives the homily as he celebrates morning Mass in the chapel of the Domus Sanctae Marthae at the Vatican in this April 11, 2016, file photo. (CNS photo/L'Osservatore Romano, handout)

VATICAN CITY (CNS) — The kingdom of God grows through hope and not by reducing it to a form of entertainment that produces a joy that appears and disappears in an instant, Pope Francis said.

While many are tempted by “new things, revelations and messages,” God has already spoken, the pope said Nov. 10 in his homily during his morning Mass in the Domus Sanctae Marthae.

“God spoke through Jesus Christ; this is the last Word of God. The others are like fireworks that illuminate for a moment and then what remains? Nothing; there is no growth, there is no light, there is nothing,” he said.

The pope reflected on the day’s Gospel reading in which the Pharisees question Jesus on the coming of the kingdom of God.

Through his response, the pope explained, Jesus illustrates that God’s kingdom is not something that flashes in an instant or provides some momentary entertainment, but is a reality that grows slowly like a seed.

“So many times we are tempted by this religion of entertainment, of looking for things foreign to the revelation, to the meekness of the kingdom of God, which is in our midst and grows. This is not hope; it is the desire to have something in hand,” the pope said.

Patience, he continued, is the only way to see the fruits of hope and to guard it like a sower who “ensures that there are no weeds near it so that the plant will grow.”

Pope Francis also called on Christians to ask themselves not only on how they are guarding this interior hope but also to discern “the good wheat from the weeds.”

“Let us ask ourselves: ‘Do I have hope? Or do I go forward as I can and not know how to discern the good from the bad, the wheat from the weeds, the light — the meek light of the Holy Spirit — from the brightness of this artificial thing?'” he asked.

“The Kingdom of God is in our midst but we should — with rest, with work, with discernment — guard the hope of this kingdom of God that is growing until the moment in which the Lord will come and everything will be transformed,” the pope said.

PREVIOUS: Prayers for the dead not meant to ‘change God’s mind’

NEXT: Readings of the holy Mass – Thirty-third Sunday in Ordinary Time