A survey of women of the New Testament 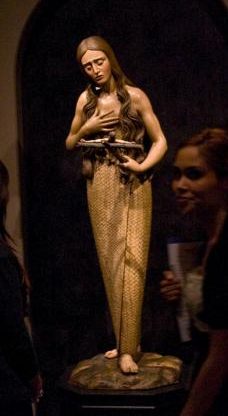 St. Mary Magdalene, one of the early Church Mothers, is shown meditating on the crucifix in this painted wooden sculpture that is part of “The Sacred Made Real” exhibit at the National Gallery of Art in Washington Feb. 24, 2010. (CNS photo/Nancy Wiechec)

Women have played an essential role in the church throughout its history. Mary, the Mother of God, and Mary Magdalene, the first person to see and witness to the risen Jesus, are known through the stories found in the Gospels.

Less is known about other women mentioned in the New Testament; however, from Paul’s writings, the apostles clearly depended on women and their families for hospitality and support to spread the message of Christ.

Lydia lived in Philippi, where she sold purple cloth. (Purple was the color of royalty, and costly.) She listened to Paul and “opened her heart” to him. After her baptism, she invited Paul to stay in her house (Acts 16:12-15).

Damaris, present when Paul preached in Athens, came to believe in Jesus (Acts 17:34). She is linked to Dionysius the Areopagite, a prominent Athenian citizen who became the first bishop in Athens, so Damaris assumedly was a significant figure in Athens as well. The Greek Orthodox Church celebrates her as a saint.

Prisca (called Priscilla in Acts 18) was married to Aquila. They were Jews from Rome. Paul lived and worked with them in Corinth, and after Paul’s expulsion from Corinth, they travelled with him to Antioch.

In Romans, Paul praises their work in spreading the Gospel: “Greet Prisca and Aquila, my co-workers in Christ Jesus, who risked their necks for my life, to whom not only I am grateful but also all the churches of the Gentiles” (Rom 16:3-4). Paul also mentions them in 1 Corinthians 16:19 and 2 Timothy 4:19.

Claudia appears in 2 Timothy 4:21, during Paul’s imprisonment in Rome. Little is known about Claudia other than her name; however, a footnote in the New American Bible suggests that Western tradition holds Claudia to be the mother of Linus, the second pope. If so, she likely belonged to a prestigious Roman family.

Paul mentions Lois and Eunice as being the grandmother and mother of Timothy, the disciple to whom Paul’s letter was written. Paul prays that Timothy has the “sincere faith” held and taught by his grandmother and mother (2 Tim 1:5; 3:14-15). As Lois and Eunice had learned the Gospel from Paul himself, Timothy could place all of his trust in it. They were early catechists.

Paul trusted Phoebe to carry his letter to the Christians in Rome. Paul calls her “our sister,” and says that she has been “a benefactor” and “a minister” of the church (Rom 16:1-2).

Other women named in the New Testament include Rhoda, a maid who was overjoyed to hear Peter’s voice as he knocked on the gateway door (Acts 12:13-16); Tabitha (or Dorcas), a doer of good works whom Peter raises from the dead (Acts 9:36-42); and Tryphaena and Tryphosa, whom Paul greets as “workers in the Lord” (Rom 16:12).

Paul, like Christ, did not hesitate to preach to women, who after “opening their hearts” to the word of God were willing even to “risk their necks” for the Christian community — and as history later reveals, give up their lives as martyrs.

Daniel S. Mulhall is a catechist living in Louisville, Kentucky.

PREVIOUS: Where is our hope today? It lies in Christ Jesus