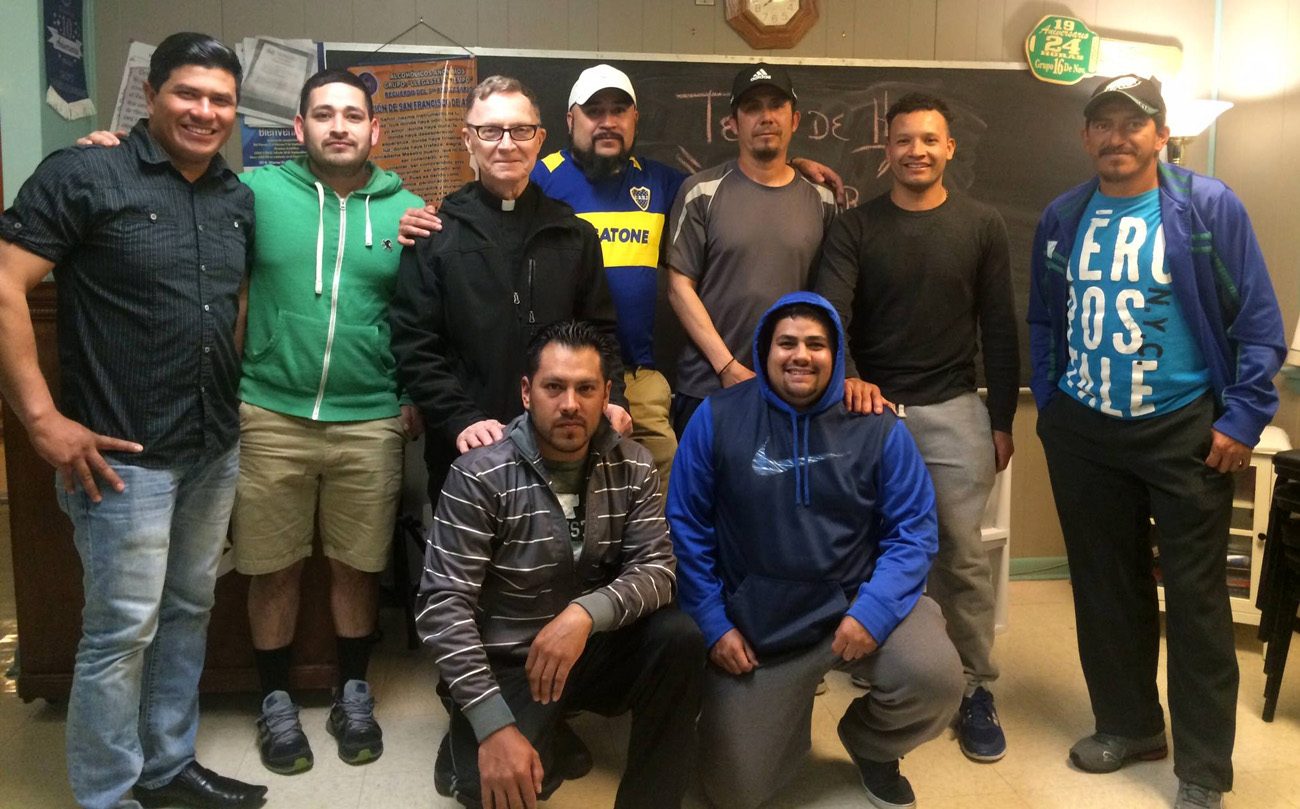 Players and organizers of a recreational soccer league on the grounds of Our Lady of Fatima Church in Bensalem stand with their pastor, Bishop Edward Deliman (center), of St. Charles Borromeo Parish. (Photo from Facebook)

When a group of young Hispanic men started a soccer league with their parish pastor’s blessing, they didn’t know the benefits would extend off the field, nor that it would catch the attention of national social justice advocates.

Four years ago Jorge Barilla and Jose Rivera approached their pastor, then-Msgr. Edward Deliman at St. Charles Borromeo Parish in Bensalem, about a Sunday afternoon recreational league on the grounds of Our Lady of Fatima Church, which has since merged with St. Charles Borromeo.

It was “a loosely organized soccer program to provide healthy recreation for young men and keep them out of trouble and from deportation,” said now Philadelphia Auxiliary Bishop Edward Deliman.

The players’ families, new arrivals from countries across Latin America, brought along food and drinks to watch the games and spend time together.

“It became a family gathering for an afternoon,” Bishop Deliman said. The young men who organized their friends for the league “came to me and they did the work,” he said, adding that the Our Lady of Fatima grounds are “a safe place where they know they can come and hang out and know they are safe.”

The bishop, along with Estela Reyes Bugg and soccer league leaders Barilla, Rivera and Nelson Dominguez, presented their story of Latino immigrants helping one another build community during the October annual gathering of Catholic social justice advocates by Catholic Charities USA in Boston, Mass.

The Bensalem community initiative was what Catholic Charities USA wished to offer other groups around the country: a model that engages new Americans, documented and undocumented, in society through faith-based groups.

The presenters from the Philadelphia Archdiocese spoke with 25 to 30 people, Bishop Deliman estimated.

“I am very pleased at the number of people who came to the session and the manner in which they embraced the presenters,” he said. In follow up conversations, participants “were interested in how they could do something like it in their city.”

The soccer league runs from spring to late summer, and a limited fall league is still underway as long as seasonable weather lasts.

“It’s a benefit to the young men,” Bishop Deliman said. “It is evangelization by way of sports. They pray before the game starts.”

And while not all the players and their families come to church beforehand, the bishop is pleased that the league is “under the umbrella of the church,” he said.

The league and the close families who join in the fun are an example of immigrants adding to the character of the community, and even among those players whose families are back in their home countries, the league provides a setting for friendship and recreation outside of their long work days.

“They form a family for themselves,” Bishop Deliman said of the young men he has come to know well.

He recalled when he visited the apartment of one of the men who was disfigured in an accident at work. “He wasn’t alone” in the small, well-kept home, the bishop said. “Four of them live together and they take care of each other.”

The league and the community it provides “is their surrogate family. It’s important to them,” Bishop Deliman said.

It saddens him to think of the latent prejudices some people hold against immigrants in light of what he knows are the good people he serves as pastor, regardless of their status.

“I’m dismayed by the resistance, a subtle resistance, especially when you think of where we all have come from,” he said.

But his focus remains on building up the community with which he is working.

As a follow up to the conference in Boston, Bishop Deliman is organizing a retreat this month for up to 25 of the men associated with the league, which he hopes will result in them taking new leadership roles in the church and in society.

NEXT: Philadelphia parishioners give $270k to CRS Rice Bowl