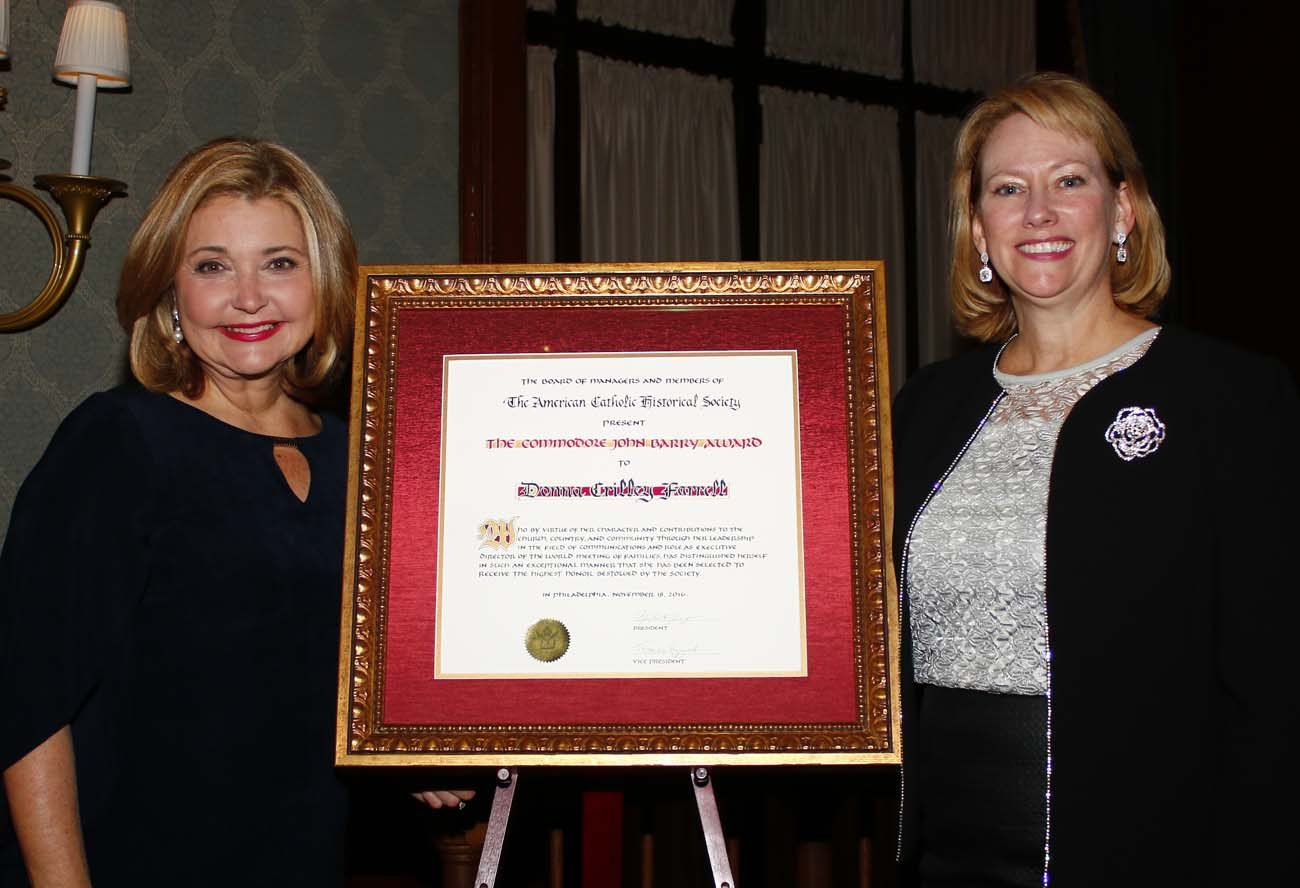 Donna Farrell, right, poses with the 2016 Commodore John Barry Award with her friend and emcee for the award banquet, Pat Ciarrocchi. The award from the American Catholic Historical Society each year honors a distinguished American Catholic. (Photo by Sarah Webb) 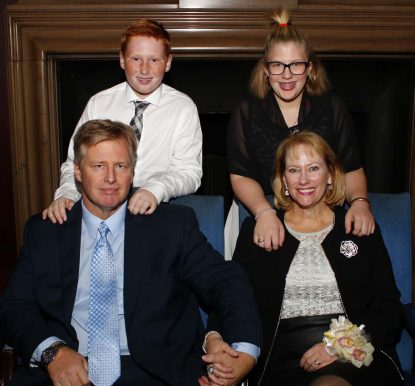 Donna Crilley Farrell, who served as executive director for the World Meeting of Families and the visit by Pope Francis in 2015, joined a fairly elite group on Nov. 18 when she accepted the Commodore John Barry Award from the American Catholic Historical Society during a dinner at the Union League of Philadelphia.

The society, which was founded in 1884, has only been presenting the annual award since 1982, but the list of winners is impressive. It includes five cardinals, an archbishop, a bishop, a Pennsylvania governor, a U.S. Supreme Court justice, distinguished educators, captains of industry and philanthropists.

Farrell, a married mother of two, is a graduate of St. Francis of Assisi School in Springfield, Cardinal O’Hara High School and the University of Pennsylvania.

She began her career in television as a news reporter and anchor. She then joined the communications staff of the Archdiocese of Philadelphia, and in 2005 was named director of communications. In 2012 she joined Independence Blue Cross as a manager for external affairs.

At the request of Archbishop Charles Chaput, she was released to take charge of the World Meeting of Families, and with that successfully behind her she is back at Independence Blue Cross as vice president of corporate communications.

Clearly, the World Meeting of Families and the visit of Pope Francis will always be a highlight in her life.

“It was an amazing event in the history of Catholic Philadelphia,” she said in accepting the Barry Award from Michael Finnegan, the Historical Society’s president.

Mistress of Ceremonies for the evening was another distinguished Catholic communicator, Pat Ciarrocchi, a former news anchor at CBS 3.

The award’s presentation address was given by Robert Ciaruffoli, who served as president for the World Meeting of Families. Music for the evening was provided by the choir of Farrell’s alma mater, Cardinal O’Hara High School.

John Barry (1745-1803), for whom the award is named, was an Irish immigrant of humble birth and Philadelphia’s most distinguished Catholic participant in the American Revolution.

Commissioned a captain in the fledgling Continental Navy, he led several successful battles against British warships, was wounded but never lost a battle and lived to receive from President George Washington in 1794 the first commission as commodore in the new United States Navy.

He is buried in the churchyard of Old St. Mary’s, which appropriately enough is located just across the street from the historic building occupied by the American Catholic Historical Society.

PREVIOUS: Life Runners witness to the unborn at Philadelphia Marathon

NEXT: Big crowd could have watched Eagles’ game, but they stood up for life instead