Big crowd could have watched Eagles’ game, but they stood up for life instead

Some 1,300 people packed a ballroom at the annual Stand Up for Life Dinner Nov. 20 at the Sheraton Philadelphia Downtown Hotel Nov. 20 in support of the Pro-Life Union of Greater Philadelphia. (Photo by Sarah Webb) 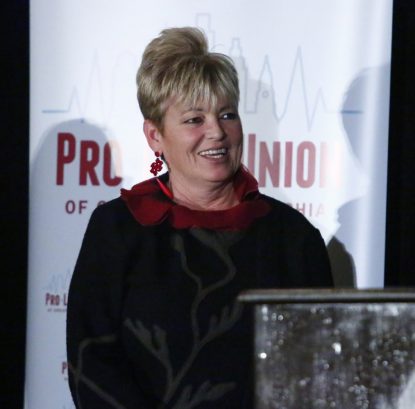 Amy Stoner, director of the Housing and Homeless Services Division of archdiocesan Catholic Social Services, received the Defender of Life Award at the Nov. 20 banquet by the Pro-Life Union of Greater Philadelphia. (Sarah Webb)

It is pretty much a rule. Don’t run a fundraiser at the same time the Eagles are being televised in football-mad Philadelphia.

There are exceptions of course, and one of them is the Pro-Life Union of Greater Philadelphia, which held its annual Stand Up for Life Dinner at the Sheraton Philadelphia Downtown Hotel on Nov. 20. (See a photo gallery here.)

That was the same Sunday as the Eagles were on the field against the Seattle Seahawks. Nevertheless, the banquet room was packed with over 1,300 pro-life advocates present.

“I attribute the turnout to the way the election turned out,” said Dr. George Isajiw, a veteran in the pro-life cause. “We don’t know what is going to happen but at least if Trump keeps his promise to put a pro-life judge on the Supreme Court it will make a difference and replace Scalia.”

Christian Matozzo, who is active with the group Democrats for Life and also in attendance at the dinner, expressed his belief that it was the life issue that turned the election. He maintains that according to one study, there are 33 million Democrats who are pro-life.

“I think in order for the Democrats to win they have to open the big tent,” Matozzo said. “The pro-life issue has a big hole in it.”

(See a video of the event.)

In fairness, the good turnout has to do with good planning by the Pro-Life Union, which now has Bill Wohlgemuth as chairman and Edel Finnegan as executive director. The organization has been running successful Stand Up for Life Dinners for 35 years.

One of the awardees at the Nov. 20 dinner were Amy Stoner, director of the Housing and Homeless Services Division of archdiocesan Catholic Social Services, who received the Defender of Life Award.

Among those who were cited in her acceptance speech were “every pregnant mom, especially those who despite their enormous challenges and circumstances, choose with love to bring their child into this world,” she said. “They are my inspiration and give all of us hope.”

Also honored was Sister Kathleen Schipani of the Sisters, Servants of the Immaculate Heart of Mary and director of the archdiocesan Office for Persons with Disabilities and the Deaf Apostolate. For the past 28 years she has been a catechist for the deaf and chair of the board for the National Catholic Partnership on Disability.

“The way we, as individuals, as a Church and as citizens notice those among us with disabilities and realize that each of us belong within the Body of Christ and within society, has tremendous impact on every aspect of daily life, civic live and parish life.”

Keynote speaker for the dinner was Karen Gaffney of Portland, Ore., a young woman who is living proof that every life is precious and has value. She was born with Down syndrome in a generation when a majority of the pre-born children who are diagnosed with the condition through genetic testing are aborted.

In spite of what would be considered an intellectual handicap, she has become an eloquent speaker and accomplished athlete in the area of long-distance swimming.

“I am the first person with Down syndrome to escape from Alcatraz,” she joked, referring to several swims from Alcatraz Island to San Francisco.

Gaffney, who was awarded an Honorary Doctor degree in Humane Letters by the University of Portland, speaks to encourage others to get involved helping people with Down syndrome live and grow in their community.

“I congratulate you for standing up for life and providing me with the opportunity to make the case for Down syndrome,” she said.