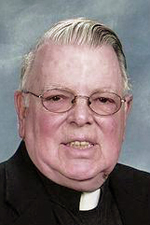 Born in Philadelphia, the son of the late Thomas Ambrogi and the late Mary (Robinson) Ambrogi, he attended Our Lady of Lourdes School and St. Thomas More High School before entering St. Charles Borromeo Seminary. He was ordained May 16, 1964 by Archbishop John J. Krol at the Cathedral of SS. Peter and Paul.

“He was a wonderful guy with a soft heart who would do anything for anybody,” said Barbara King, a parish secretary at St. Patrick. “He would always say, ‘God will provide.’ He didn’t get upset. I’ll miss him.”

Msgr. David Diamond first encountered Father Ambrogi while growing up in St. Gabriel Parish. “I was just a kid and he became part of the family,” he said. “In all things he made parish life vibrant. He was just a fine priest who knew his work and was thrilled to be a priest.”

Later after Msgr. Diamond’s own ordination and assigned to the seminary without parish duties, Father Ambrogi asked him to provide weekend ministry at his parish, and Msgr. Diamond did that for the 12 years he was at the seminary.

Father Ambrogi built a new church and gymnasium at St. Patrick’s, but he also had a great concern for the needs of others.

“He was a catalyst for good in his own parish and beyond,” Msgr. Diamond said. “He pointed the way for those who can to be generous to those less fortunate.”

After Father Ambrogi retired from St. Patrick, he did weekend ministry at Immaculate Conception, Jenkintown, where Msgr. Diamond is now pastor. “Turnabout is fair play,” he told him.

Pat Wood, who was director of religious education at St. Patrick, remembers how he would help others behind the scenes, and always for the underdog. “If there was a child in school who was in trouble he would be an advocate. He gave everything he had,” she said.

She remembers him as “not being old-fashioned or living in the past.  And if he had something on his mind, he would tell you,” she said.

There will be a viewing for Father Ambrogi at St. Patrick Church beginning at 4 p.m. today, Tuesday, Nov. 22 followed by a 7 p.m. parish Mass.

There will also be a 9 a.m. viewing for Father Ambrogi on Wednesday, Nov. 23, followed by his 11 a.m. funeral Mass. The principal celebrant will be Bishop Nelson Perez, who also assisted through weekend ministry at St. Patrick during Father Ambrogi’s tenure.

Concelebrants will include Msgrs. Michael Picard and Donald Leighton, Fathers Christopher Redcay, Daniel Devine, James McBride and Matthew Guckin, and Msgr. Diamond, who will be the homilist.

Father Ambrogi is survived by his brother, William Ambrogi, and many nieces and nephews. Interment will be at Holy Cross Cemetery, Yeadon.