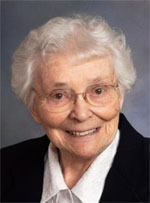 Sister M. Bernadette of Lourdes Moerman, I.H.M., died Nov. 10 in Camilla Hall, Immaculata, in the 66th year of her religious life. She was 85 years old.

Born in Philadelphia, Sister Bernadette entered the Congregation of the Sisters, Servants of the Immaculate Heart of Mary in 1950 from St. Bernadette Parish, Drexel Hill, and professed her vows in 1953.

She taught in various elementary schools in the Archdiocese of Philadelphia and the Dioceses of Richmond and Metuchen.

The funeral Mass was celebrated Nov. 15 at Camilla Hall. Father Stephen A. Moerman was the celebrant and homilist. The concelebrants were Fathers Timothy O’Sullivan and William E. Dean, and Msgr. Joseph Logrip.

Sister Bernadette is survived by members of her religious community, her brothers, James (Dorothy) John (Mary) and many loving nieces and nephews, grand-nieces and grand-nephews.

She was predeceased by her parents, Theodore F. and Catherine E. Bannar (Moerman) and a brother Ted (Mercedes).

NEXT: Father Joseph Huynh, minister to Vietnamese newcomers, dies at 75