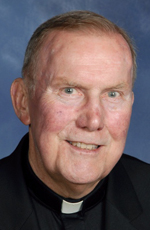 He was a senior priest at St. Christopher Parish, Philadelphia. On Saturday, Nov. 5, after celebrating an 8 a.m. parish Mass, he was in the midst of celebrating a 10 a.m. funeral Mass when he collapsed at the altar. He was rushed to the hospital where he died three days later.

He was ordained May 21, 1966 by Archbishop John Krol at the Cathedral of SS. Peter and Paul and his early assignments included faculty at Cardinal O’Hara High School and parochial vicar at Nativity B.V.M. Parish, Media; St. Gregory, Philadelphia; Incarnation of Our Lord, Philadelphia and St. Henry, Philadelphia, where he also served as pastor.

Although Father Michel was of German heritage and was active in the German community as national chaplain with the Kolping Society, he voluntarily learned Spanish, which served him well at Incarnation Parish, according to Msgr. Richard Bolger, a seminary classmate.

“He truly was a good, solid parish priest, always willing to give his time,” Msgr. Bolger said. “I felt honored to have him for a friend.”

Father Michel’s next assignment, St. Henry Parish, was a German personal parish but transitioning to a Hispanic majority. At times, Msgr. Bolger recalls, Father Michel would be celebrating Mass in English, German and Spanish all on the same day.

Antoinette DiGregorio, who was his parish secretary for the entire time, remembers him as a quiet man.

“I never heard him raise his voice the whole time he was there,” she said. “He never stopped working, and he helped a lot of people although no one knew it. I can’t say anything bad about him.”

After retiring as pastor, Father Michel went to St. Christopher Parish as a senior priest. It is supposed to be light duty but he rarely took a day off, according to Msgr. Joseph Garvin, the pastor, who was with the family at Father Michel’s bedside when he died.

“He really was liked by the people here and was very faithful and never had an unkind word for anyone,” Msgr. Garvin said. “We’ve been rocked by his death.”

A viewing will be held for Father Michel at St. Christopher Church beginning at 4 p.m. on Tuesday, Nov. 15, followed by a 7 p.m. parish Mass.

His funeral Mass will be celebrated by Bishop Joseph F. Martino at St. Christopher at 11 a.m. on Wednesday, Nov. 16.

Among the concelebrants will be Father Francis X. McKee and Msgr. Bolger, who will be the homilist.

Father Michel is survived by his brothers, Martin and Joseph Michel; his sister, Gertrude (Michel) Forte and nieces and nephews.

PREVIOUS: Father Donald Birch, who ‘lived the beatitudes,’ dies at 76

NEXT: Franciscan sister, native of Ireland, dies at 102