Father Donald Birch, who ‘lived the beatitudes,’ dies at 76 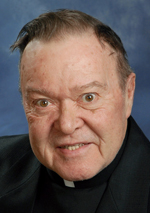 He and Father John Farry met at the seminary 59 years ago and remained lifelong friends, vacationing together over the years and sharing a residence in retirement until recently.

Father Farry remembers him as a spiritual man, very quiet, and a man of simple faith who followed the teachings of the church in all things and was especially kind to parishioners in need.

Father Birch remained in active ministry despite the fact that he had major health problems for much of his career.

He was ordained May 20, 1967 by Archbishop John J. Krol at the Cathedral of SS. Peter and Paul and his first assignment was to the faculty of St. James Catholic High School, Chester. He then served as parochial vicar at St. Therese of the Child Jesus, Philadelphia; Our Lady of Charity, Brookhaven; St. Katherine of Siena, Philadelphia; St. Augustine, Bridgeport and Holy Cross, Springfield.

He served as pastor at St. Madeleine Sophie, Philadelphia; and in 2000 was appointed pastor of St. Joseph the Worker and pastor emeritus in 2013.

At Queen of the Universe Parish, where Father Birch stayed for a time, Father Michael Hennelly, the pastor, remembers him as gentle, kind, merciful and compassionate; small in stature but strong  in courage.

“It’s like the words of St. Vincent de Paul,” Father Hennelly said, “’Where there is simplicity there is God.’ He lived the beatitudes.”

There will be viewing for Father Birch beginning at 9 a.m. on Thursday, Nov. 3, followed by his 11 a.m. funeral Mass celebrated by Archbishop Charles Chaput.

Concelebrants will include Father Farry, Father Michael Lonergan and Father Hennelly, who will be the homilist.

Father Birch is survived by his sister, Marge Mossop and brothers, Ed and Raymond Birch and many nieces and nephews. Interment will be at Resurrection Cemetery, Bensalem.