The cultivation of a new religious vocation 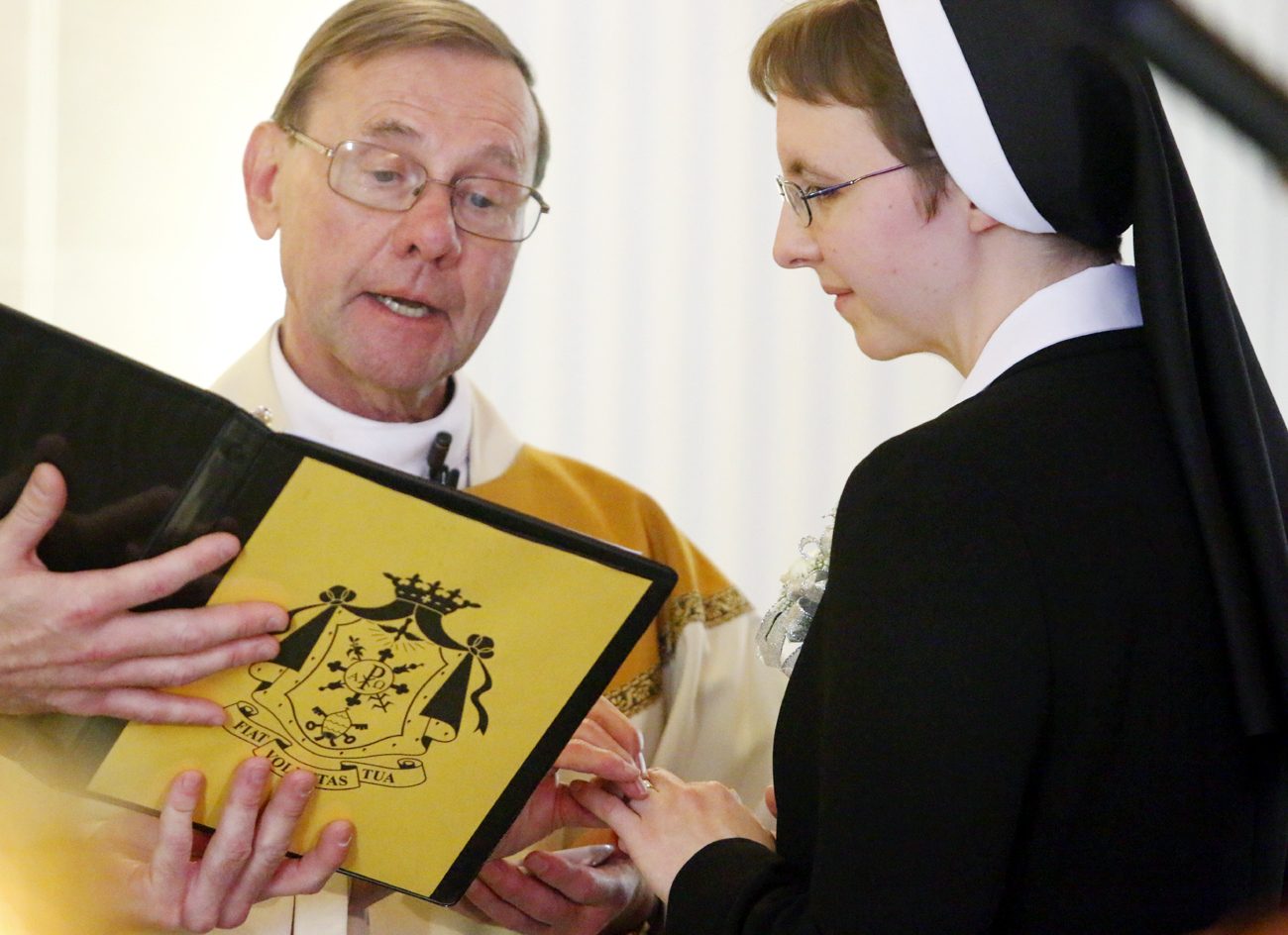 The uncle of Sister Maria Sophia Gerlach, Father Michael Rzonka, leads the rite of profession into the Sisters of the Holy Family of Nazareth Nov. 12 at Nazareth Academy High School. (Photos by Sarah Webb)

A religious vocation – or any true vocation for that matter – is like a seed that is planted. Without nourishment it will surely die, but with proper attention, watered by example and encouragement, it will, in God’s good time, blossom into full flower.

When Maria Gerlach took her perpetual vows as a Sister of the Holy Family of Nazareth as Sister Maria Sophia Gerlach on Nov. 12 at the Chapel of Nazareth Academy High School, it was the culmination of a decades-long journey that could have crossed into very different paths along the way.

First of all there was family example. She grew up the eldest of five children of George and Tina Gerlach in a solidly Catholic family with a history of religious vocations.

But that’s past generations. As a child Maria may have thought about entering religious life, but she was more flustered than flattered when in sixth grade at Christ the King School in Northeast Philadelphia, Father Louis Bellopede made a prescient comment. He was distributing report cards, saw her perfect 100s in religion and declared, “You have to be a sister.”

“Oh really?” she thought. The truth is, at that stage of her life, as she remembers, she had zero self-confidence, was very shy, and did not easily make friends. Truthfully, as a youngchild, in her shyness she found some of the Sisters of St. Joseph who taught her rather frightening. 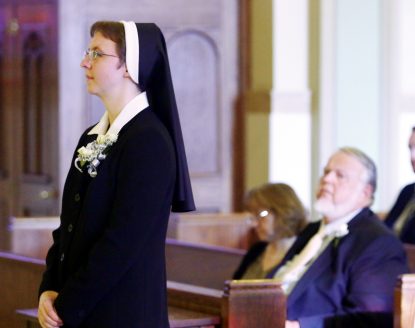 Sister Maria Sophia Gerlach professes her vows in the Sisters of the Holy Family of Nazareth Nov. 12 in the chapel of Nazareth Academy High School as her parents, Tina and George Gerlach, witness the rite.

Her first real influence for religious life came from St. Joseph Sister Helen Victor, who sensed her unhappiness and really took her under her wing. Sister Helen let Maria come into the classroom early, take the sister’s bag back to the convent, the little things. “On balance she was a kind and supportive woman,” Sister Maria Sophia recalls.

For her high school years she chose Nazareth Academy High School, conducted by the Sisters of the Holy Family of Nazareth, and here her academic excellence continued.

She especially remembers the wonderful influence of Sister Angela Cresswell. “She was encouraging and someone to whom I could speak of what was going on in my life,” Sister Maria said. “I could tell her things I could not share with my parents.”

Then too, there was elderly Sister Mary Michael, who sensed a religious vocation and confided, “I am old, I’m going to die, you should replace me.”

Because of her grades when it came time for college she had several offers for scholarships, most of them local but one a full scholarship for Boston University. Her father urged her to accept it, and she did so, not because of the school’s prestige but, still shy, she believed it would be a perfect place just to be lost in the crowd.

That never happened. Being on her own in a distant city and forced to make her own decisions absolutely changed her outlook on life and she grew. It didn’t hurt that after just two weeks into college an upperclassman asked her for a date. They went out, hit it off and were a twosome for the next two years and even speculated on marriage. But when he graduated and returned to California the idea of a vague, long-distance courtship was unappealing and as often happens with college romances the relationship ended.

She dated another young man for the next two years but nothing came of that either, probably because deep down she sensed she was being pulled in quite another direction. 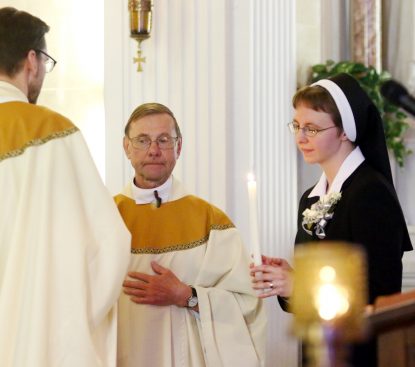 In college she studied chemistry, physics and math with the idea of teaching those subjects on the secondary level, but upon graduation she did not immediately gain a teaching position, and stayed at Boston University for a year working as an administrative secretary.

Meanwhile she was active with a discernment group at Boston University’s Catholic Center.

“They were very clear this was not just for people going into religion,” she said. “It was like Abraham praying of whatever God wants of you. The idea of religious life did not yet solidify for me.”

The next year she obtained a position at Mount St. Joseph Academy in Boston, teaching geometry and trigonometry. Although she still could not quite see herself in religious life, others could.

One of the sisters told her a student had asked if she was an “undercover nun” and another faculty member who was also discerning religious life professed she herself had “nundar” (radar for spotting a nun) and was certain Maria should enter the convent.

After two years of teaching Maria still was not certain about her future, either lay or religious, but was fairly certain teaching was not her forte. It was not as fulfilling for her as she expected, and maybe she should take a break and volunteer for a bit.

She told this to her friend from Nazareth Academy, Sister Angela, who saw an opening and pounced.

The Sisters of the Holy Family of Nazareth have a very strong Polish connection and Sister Angela suggested she should volunteer at one of their programs in Poland. She did so for three months and had a great experience, living at a convent, working with preschoolers and working in the kitchen.

While still in Poland she wrote back to the vocations director in America formally applying for entrance into the Sisters of the Holy Family of Nazareth.

She entered into the affiliacy program in 2009 with one other candidate, and the following year was admitted into the postulancy program, although the other young woman had dropped out.

At this point she was given the option either to keep her baptismal name or choose a name in religion. She chose to be Sister Maria Sophia Gerlach, or in the formal style which she does not use in daily life, “Sister Maria Sophia of Jesus Christ Fully Present.”

“I came to my name through prayer,” she said. “I asked the Lord what you want me to be called. Sophia means wisdom and it was a journey searching for wisdom.”

But there may have been something else in the inspiration. A year or so later she visited the cemetery where Sister Mary Michael was buried. It was she who asked Maria to take her place when she died. There it was on her tombstone, her baptismal name was Sophie. “I never knew,” Sister Maria Sophia said.

Her entrance into religious life does beg the question about age. Maria was relatively young, and because of the decline in vocations, most of her new sisters in religion were contemporaries of her mother and grandmother. Does this present a difficulty for young women entering?

“Yes and no,” she said. “We do have six sisters in their 30s and many in their 40s. It was good for me but it might not be for everybody.”

Sister Maria made her first vows in 2012. As a vowed religious, she taught school for a while in the Chicago area but still wasn’t fond of teaching. More recently she has been working part time in the financial aid office at Holy Family University and pursuing an MBA at La Salle University, because the congregation feels the need for some younger sisters to become knowledgeable in the administrative area for the future.

Sister Maria Sophia is happy with her vocation choice and at this point is happy in her own skin.

“In my community life I find support,” she said. “I find role models I can look to for what they experienced in the past, and what they are looking forward to in the future. I can look around me and see models for the prayer life that was established for us and has grown over time through our constitutions.”

On the other side there are minor exasperations. “I can also feel the pressure of living with 20 other women and half of them think I would be a better sister if I do ‘X,’ about a third of them think I should do ‘Y,’ which is the direct opposite of ‘X.’ The problem for me is discerning what God is calling me, Maria Sophia, to do at this moment. 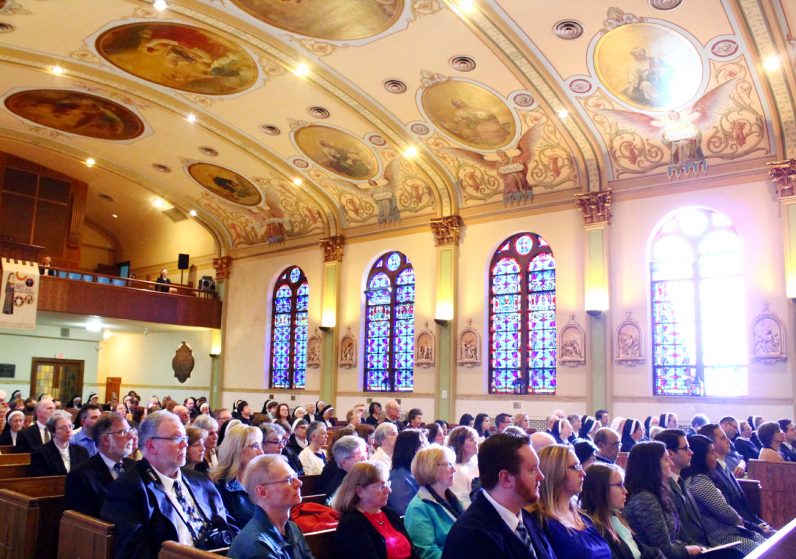 Family and friends fill the chapel of Nazareth Academy High School Nov. 12 for the profession of vows with the Sisters of the Holy Family of Nazareth by Sister Maria Sophia Gerlach.

PREVIOUS: It’s still a wonderful life after 78 years of ministry

NEXT: Young woman makes music as ‘a way that I please God’