Young woman makes music as ‘a way that I please God’ 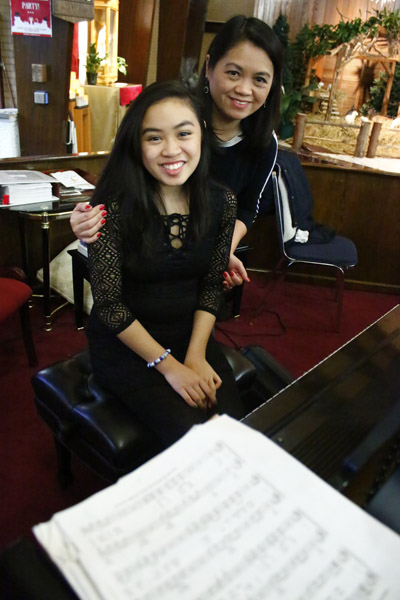 God, family and music are the priorities for Angela Alquiros (center), to which she devotes herself along with her mother, Anna, at Epiphany of Our Lord Church and at Archbishop John Carroll High School. (Sarah Webb)

For Angela Alquiros, 16, and a junior at Archbishop John Carroll High School, the three highest priorities in life are God, family and music, both vocal and instrumental.

Academics are also part of the equation because she is attending Carroll on a full scholarship and was recently inducted into the National Honor Society.

Angela is the eldest of the four children of Caesar and Anna Alquiros, followed by the equally alliterate Adriel, Anthony and Alyssa. Her parents, who are originally from Manila in the Philippine Islands, are computer programmers and active in Epiphany of Our Lord Parish, Plymouth Meeting, as well as through Couples for Christ (CFC) in the local Filipino community. Angela is an active member of CFC youth program.

Angela’s interest in music began at an early age and blossomed in second grade when Epiphany’s music director, Connie Steuer, took her under her wing. She helped Angela develop her talents through the elementary grades at Epiphany’s then-parish school and later at Holy Rosary Regional School (based at Epiphany), and on into her high school years.

Angela has become an accomplished pianist, choir member and soloist.

Last year at Carroll she played Maria in the school’s production of “The Sound of Music,” and this year she was Cinderella’s mother in a production of “Into the Woods.”

She has cantored for her parish and one of her most exciting moments was participation in the archdiocesan choir when Pope Francis visited Philadelphia for the World Meeting of Families in 2015.

“Music is the way I express myself, and a way that I please God,” Angela said. “Every time I do music it goes back to God.”

But at Sunday Mass at Epiphany these days she usually is not singing. That’s because her mother sings the hymns while Angela plays the piano. (See a photo gallery from a recent Mass at Epiphany here.)

“My mother is my best friend, and I tell her everything,” Angela said. “She is one of the people who inspired me to sing and we serve together at Mass.”

As to which she prefers, singing or playing an instrument, “it’s kind of a balancing act,” she said, explaining she enjoys playing the piano at church, and mostly singing in other places.

“My dad helps me a lot too and he supports whatever I do,” she said. “He drives me to everywhere I have to go.”

In whatever she does, both her parents are totally supportive.

“She’s a very loving girl, and I’m proud of all she has accomplished,” Anna Alquiros said. “She is also artistic, with drawing, painting and calligraphy. She’s done a lot at a very young age and we always support her and inspire her to serve.

“She wants to serve God through music and singing and she has a very strong faith. She has been part of CFC from the time she was a baby.”

At this point Angela really hasn’t decided what she will study during her future college years. “Whatever it is, music will be at least a minor,” she said. “Every time I find music it helps me serve God better.” 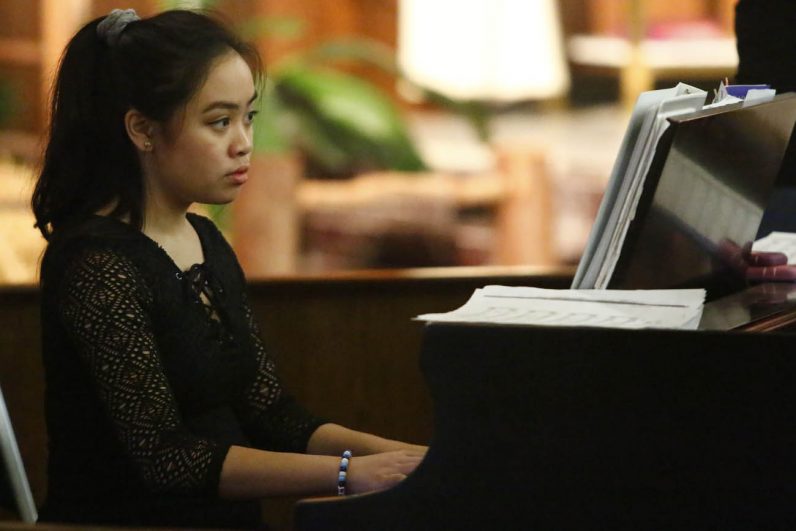 An accomplished musician and singer at the young age of 16, Angela Alquiros plays piano while her mother, Anna, serves as cantor at their parish, Epiphany of Our Lord in Plymouth Meeting. (Photo by Sarah Webb)

PREVIOUS: The cultivation of a new religious vocation

NEXT: Two sisters pass on love of Catholic faith to next generations