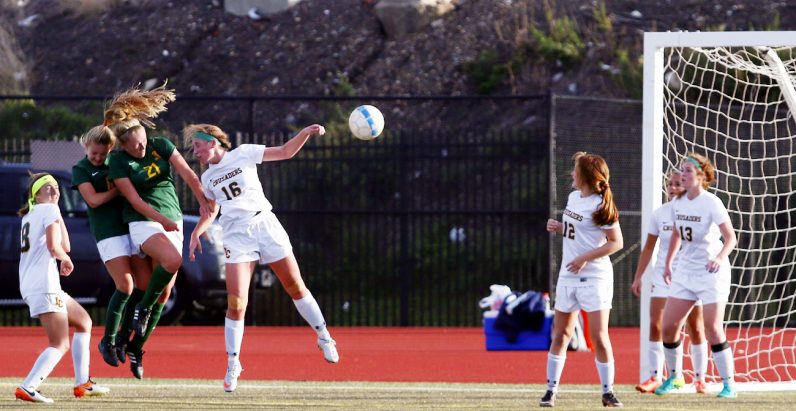 Sophia Filippo (no. 21, green) heads the ball into the Lansdale Catholic net for the winning goal in overtime as Archbishop Wood won the Oct. 29 game, 2-1, and captured the Catholic League championship. (Sarah Webb) 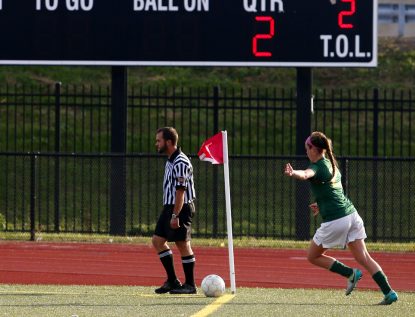 Overtime. Depending on who wins or who loses, there is nothing better, and nothing worse.

The ladies of the hour were seniors Sofia Filippo and Kylie Menarde. As Menarde lined up for a corner kick in the sudden death format, Filippo tried to establish solid position in front of the Lansdale Catholic cage. Menarde’s boot was high and straight – the definition of a perfect corner kick.

As the ball descended Filippo used a flick of her head to nudge the ball past the LC defense, and Archbishop Wood was the Catholic League champion for the 14th time in 27 championship appearances since the program began in 1981.

“I wasn’t really thinking of anything other than trying to make some sort of a play,” said Filippo. “After I hit it, I didn’t watch the ball go in, but I saw it hit the net. I was the happiest person ever. I can’t imagine ever having a happier feeling.”

Filippo and Menarde have been close friends since playing on the same club team at 8 years old. At the time, Filippo attended Our Lady of Mount Carmel School in Doylestown, with Menarde going to St. Bede the Venerable in Holland (now St. Katharine Drexel Regional).

The two continued their friendship ever since. 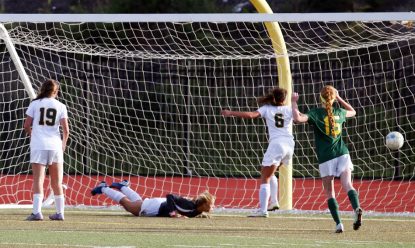 The ball falls into the back of the net on the final goal of the game, a header off a corner kick, during the Catholic League championship won by Archbishop Wood, 2-1, over Lansdale Catholic Oct. 29 in South Philadelphia. (Sarah Webb)

“I honestly couldn’t ask for a better friend and teammate over the past 10 years that I’ve known her,” said Menarde. “Her scoring the goal was a perfect moment and something we have dreamed of since freshman year.”

Filippo’s goal was her career-best 17th and 63rd of her career. None, obviously, had ever been in the same stratosphere of importance.

Lansdale Catholic led 1-0 on a goal by sophomore Sarah Fitzpatrick before a penalty shot conversion by Wood sophomore Leah Brzezicki tied the game before halftime. Although the Crusaders maintained possession for most of the final 40 minutes, they did not acquire many quality scoring chances. Those they did were handled by sophomore goalie Molly Fleming.

Among the hundreds of fans in the audience were Filippo’s parents, four brothers and three sisters (the oldest, Hunter, plays soccer at La Salle University and had a game in Pittsburgh). Mom Jennifer, nee Beisel, is a former standout basketball player at St. Hubert and Villanova. Dad Ron played baseball at both Father Judge and Drexel.

“It’s even more special having the family there,” said Filippo. “Really, I’m not sure that the game could have gone any better. We will always look back at this and feel happy.”

Recently named a first-team All Catholic for the third straight season, Filippo said the Vikings’ aspirations continue to rise, which is “fine” with her.

“The big thing is getting over the hump and winning the (Catholic League) championship,” said Filippo. “Being the one to score the (overtime) goal is indescribable. We worked so hard for this.”

On Nov. 8, the Vikings will play Fleetwood in the first round of the PIAA state tournament. 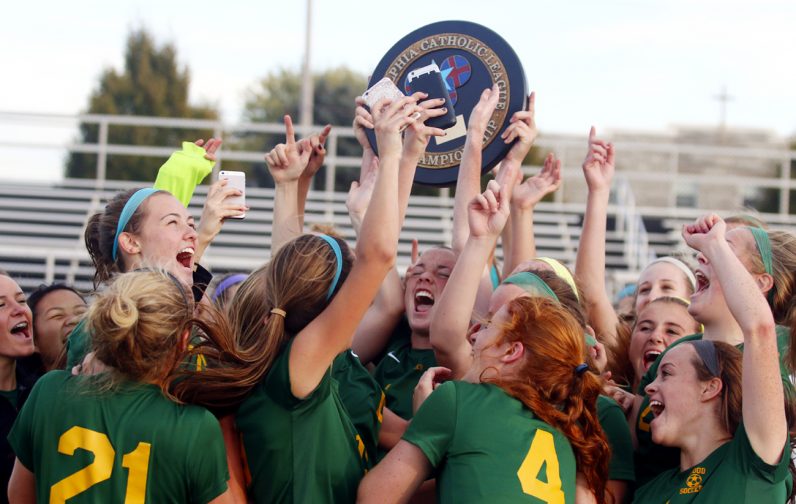