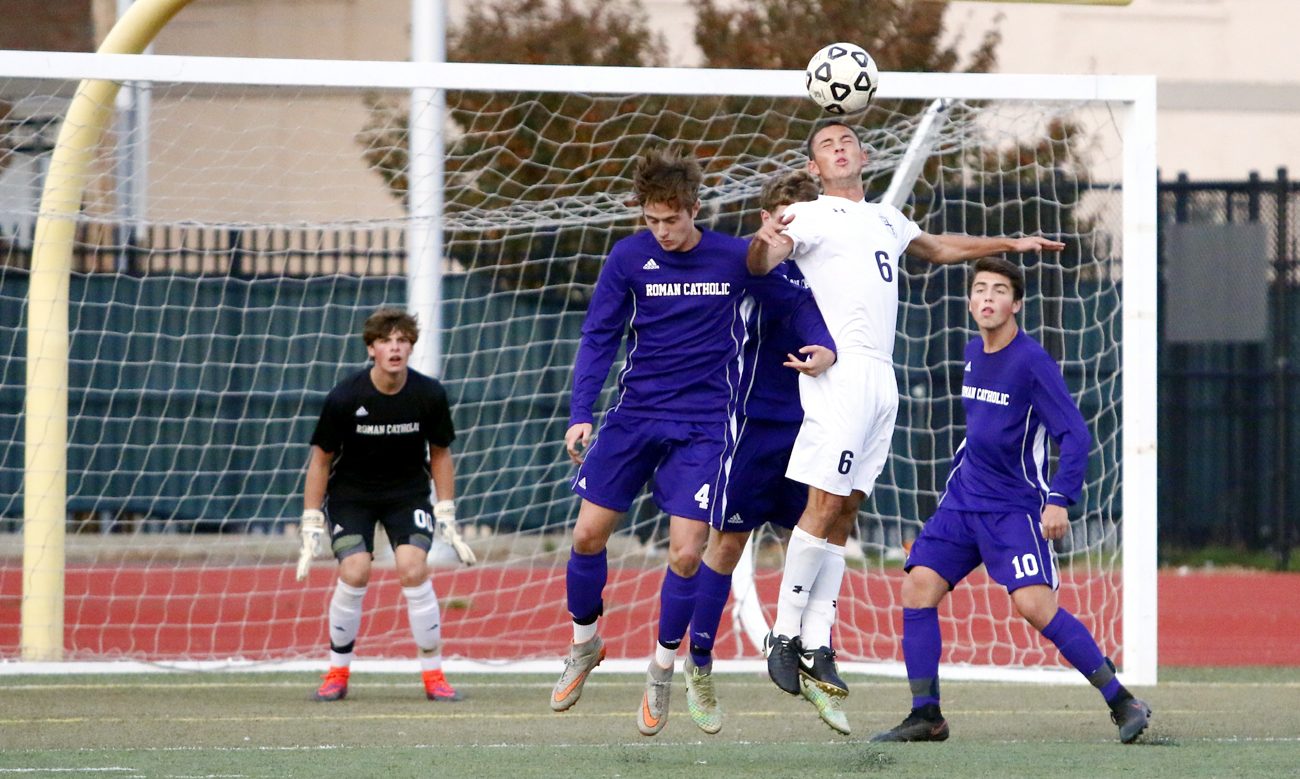 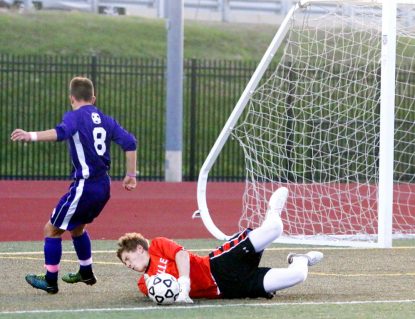 La Salle goalie Brett Werner (in red) makes a big save during a game in which he gave up only one goal en route to the Explorers’ championship victory over Roman Catholic. (Sarah Webb)

Brett Werner was surrounded by friends and family. He tried to summarize his emotions.

“This is something I’m never going to forget,” he said.

His teammates and coaches would certainly second that.

Werner, a 6-foot, 4-inch junior goalie, had made numerous key saves along the way. His final stop, leaping through the air to envelop a last-ditch corner kick by the Cahillites, preceded the final whistle by just a few seconds.

When the game was officially over, Werner was joined by a stream of teammates and fans, a few of whom ripped off their shirts in celebration of La Salle’s eighth Catholic League title and first since 2012.

The Explorers’ triumph came at the expense of a Roman Catholic team that was defending last year’s title. Both La Salle and Roman were undefeated during the regular league season. Several weeks earlier, La Salle (9-0-2) and Roman (8-0-3) had tied their game, 2-2, thus establishing a well-anticipated event.

“Roman Catholic is a great team,” said La Salle coach Tom McCaffery. “They played like a champion. They never stopped coming at us, and that was expected.”

A game that many had figured might be scoreless during regulation, La Salle stunned Roman with a two-goal flurry two minutes apart less than 10 minutes into the game. Senior Mike D’Angelo gave La Salle a 1-0 lead 6:06 into the game when he flicked a long free kick by senior Jim Natale behind Roman freshman goalie Kevin Tobin, who later would make some excellent stops to keep the Cahillites close. Two minutes later, senior Zach Hogan doubled La Salle’s lead.

Roman Catholic coach Ray DeStephanis immediately reminded his troops to remain calm. There were more than 70 minutes remaining. The Explorers had recently survived a 2-0 hole against William Tennent by scoring three unanswered goals in a 3-2 win.

“We had plenty of time,” said DeStephanis. “There was no need to panic.”

The Cahillites dominated several stretches during both halves, but Werner and his defense remained impenetrable.

Finally, with a bit less than 14 minutes left, Roman senior Matt Flanagan scored from in close. Now a 2-1 game, it appeared as though the Cahillites might discover a way to force overtime.

The packed crowd was on its collective feet. La Salle withstood Roman’s desperation charge down the stretch, but it was far from easy.

“Just have to keep playing smart and stay within yourself,” said Natale, arguably the title game’s most unheralded star. “It didn’t hurt that we had Brett Werner back there.”

“It was a little nerve-wracking,” Werner said. “That’s why I signed up for it. It’s all part of my job.”

“Brett Werner is the the best keeper in the league, and he played like it tonight,” said DeStephanis. “When we got the one goal, it was big-time. Once you get that first one, you start to believe that it’s only a matter of time before you get the next one.”

There would be no second goal, and one of the most riveting seasons in Catholic League history had come to an end.

“I’m so proud of our guys,” said McCaffery, still showing the effects of an impromptu ice-water bath, courtesy of his exuberant players. “We had to play our best, and we did. We got the lead, and we kept our composure when Roman pressed us.”

“This game was really important after last year,” said Natale. “Northeast beat out (Roman Catholic) last year, so we knew we had to come out and work hard to represent the Catholic League well and claim the district trophy back.”

The Explorers await word on whom they will meet in the PIAA state tournament that begins on Nov. 8. 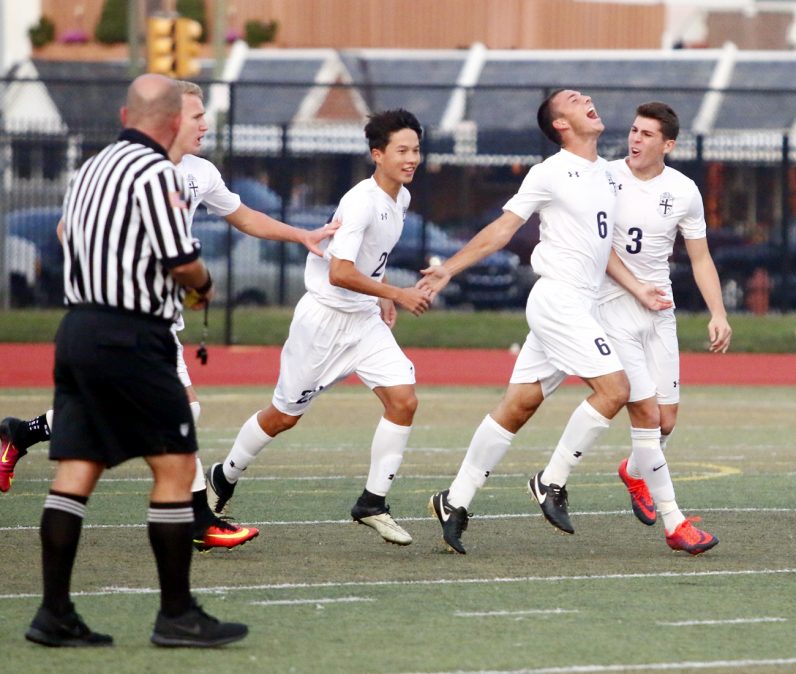