At Christmas, recognize your sin and let God caress you, pope says 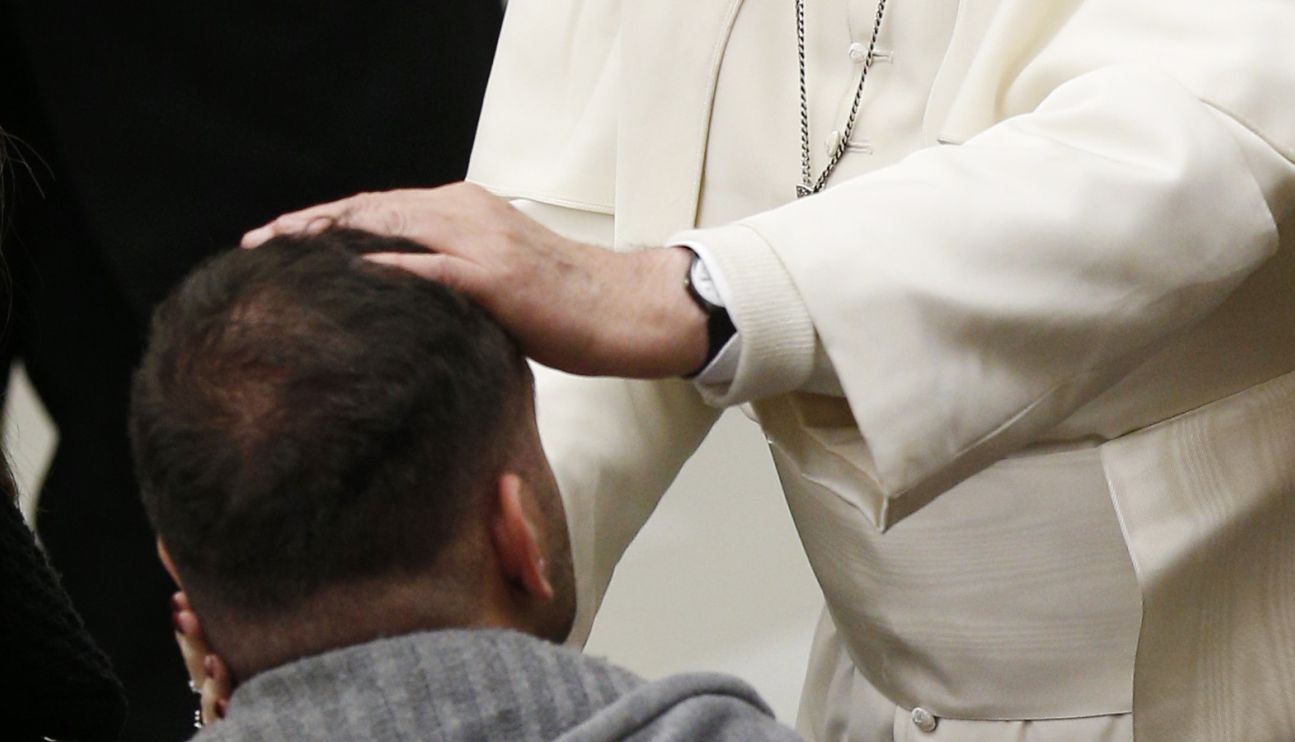 Pope Francis greets a man while meeting the disabled during his general audience in Paul VI hall at the Vatican Nov. 30. (CNS photo/Paul Haring)

VATICAN CITY (CNS) — At Christmas, God reveals his full power, which is the power of relentlessly seeking his lost sheep and, when he finds them, giving them a caress, Pope Francis said.

Christmas, he said, is a celebration of the fact that “the Lord comes with his power — which are his caresses — to find us, to save us like lost sheep and bring us back to the flock of his church.”

Pope Francis said that when he reads the Gospel story of the lost sheep, he always thinks of Judas, “the most perfect lost sheep in the Gospels.”

In the Bible, he said, Judas seems always to have had “bitterness in his heart,” something critical to say about others and a standoffish attitude.

Judas, who is one of the apostles but betrays the Lord, has a “double life, that double life that many Christians have — even priests and bishops, it pains me to say,” the pope said.

“We must understand the lost sheep,” he said, because “we, too, always have something — small or not so small — of the lost sheep.”

The lost sheep, he said, know where the shepherd wants to lead them, but they go off in another direction.

God’s response is described not only in the Gospel story of the lost sheep, the pope said, but also in the day’s first reading from Isaiah 40: “Here is your God! Here comes with power the Lord God, who rules by his strong arm. … Like a shepherd he feeds his flock; in his arms he gathers the lambs, carrying them in his bosom, and leading the ewes with care.”

Christmas, he said, is a celebration of the coming of the Lord, who “comes like a judge, but a judge who caresses, a judge who is full of tenderness, who does everything to save us.”

Pope Francis said Matthew 27:3 gives the idea that maybe there was hope even for Judas who, as it says, “seeing that Jesus had been condemned, deeply regretted what he had done.”

The good news of Christmas, the pope said, is that God never stops seeking out the lost sheep. Recognizing his love, people should allow themselves to be consoled and resolve to follow him more closely.

Pope Francis prayed for the grace “to await Christmas sincerely recognizing our wounds and sins, to await the power of God who comes to console us, who comes with power, but the power of tenderness and caresses that are born of his heart, a heart so good that he gave his life for us.”

NEXT: The light changes us