Racism is a disease that must be cured

Catholic News Service presents a series of columns in the wake of the recent national elections from leading archbishops on key issues facing the church and the new Trump administration. 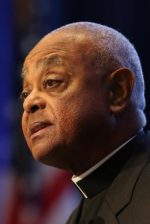 Many diseases frighten us — as well they should. Over the years, we have learned important details about some of our most virulent illnesses — their causes and their cures — yet when outbreaks occur, even with our advanced medical discoveries, they can cause uneasiness or even panic.

Ebola, Zika, cancer, polio and antibiotic-resistant infections can elicit widespread fear among the most sophisticated populations.

Similarly, racism — the belief that one group is superior to another due to race — is a grave moral disease whose recurrence, aggressiveness and persistence should frighten every one of us.

Like a serious medical disease that may seem to have been brought under control, racism, people had hoped, was on the wane. The election of our first African-American president created a confidence that we were surely moving beyond our racist history and that the epidemic itself was on the decline. Others were not so convinced.

The venom of and the reaction to our recent presidential election have caused many to believe that whatever progress we thought we’d made was only illusory.

The recent rash of killings of men of color by law enforcement personnel and citizen vigilantes is a reminder of the blatantly racist lynchings and bombings of the last century that went unsolved and too often unnoticed. The disease of racism has clearly not been cured in our nation and in far too many other places on the globe.

Whenever one can play on the fears of some people and depend upon the ignorance of others, racism flourishes. As a political strategy, such taunting may win votes, but it destroys national unity and our future.

And while this inequity touches all races, when one group is made to feel that its economic situation results from the coddling of another, the reaction is often a racist response.

The truth is there are too many dreadfully poor white people, black people and brown people. Each group suffers not because of the status of others but because of the exploitation of systems that seek their own advantage at the expense of all the poor: white, black and brown.

The attitudes emerge: “The immigrants are taking our jobs.” “Public aid only rewards laziness.” “Poor and struggling white people have been forgotten.” The conditions necessary for the transmission of racism were thoroughly mixed with such attitudes during the recent election process. Left untreated, the prognosis is bleak.

We have returned to a moment in our nation’s history when racist feelings and sentiments have been condoned as acceptable to express publicly and publish openly.

Some suggest that this is merely a consequence of our right of freedom of speech. Others believe that these attitudes and opinions were always present and merely lay dormant like a virus until recent societal stimulus reactivated them. The insidious moral disease of racism has not been cured.

One of the images that Pope Francis likes to use when describing the church is that of the “field hospital” — a place where people who have been injured or are sick can go to find healing. This field hospital of Jesus Christ must take up the Gospel responsibility of responding to those who continue to suffer from the moral plague of racism, whether as its victims or its perpetrators.

Dr. Martin Luther King Jr. and his collaborators often reminded the people of our nation that the oppressed and the oppressors both need our attention and outreach. Hating another person does harm both to those who suffer discrimination and those who discriminate and oppress others.

The ministry of Jesus was always directed toward the sinner as well as those who were the victims of sin. It can be no different for the church when it comes to curing and healing the sin — the disease — of racism.

Our new administration must recognize and address the deadly impact that racism and racist behavior continues to inflict upon our nation and its people. Racist words and slogans can inflame violence and do great harm to the fabric of our country.

Words alone cannot bring healing and reconciliation. All those entrusted with the responsibility of civic leadership must disavow any vestige of racism and hatred of other people because of race, religion, legal status or gender. Our political leaders must act with swift determination to heal the destructive elements of racism in our nation.

The new administration can count on the steadfast collaboration of the Catholic Church in our country to help heal ourselves of this devastating moral sickness, so that we can live together in justice, peace and mutual respect.

Religious and political leadership must work together to find a cure. Laws alone cannot eradicate racism, and only the Gospel can inoculate us from this national disease that threatens us all.

Archbishop Wilton D. Gregory is Archbishop of Atlanta and former chairman of the U.S. Conference of Catholic Bishops’ Task Force to Promote Peace in Our Communities.

PREVIOUS: Spend less, give more and turn Christmas upside down

NEXT: Uncle is welcome for Christmas, but not his smoking habit