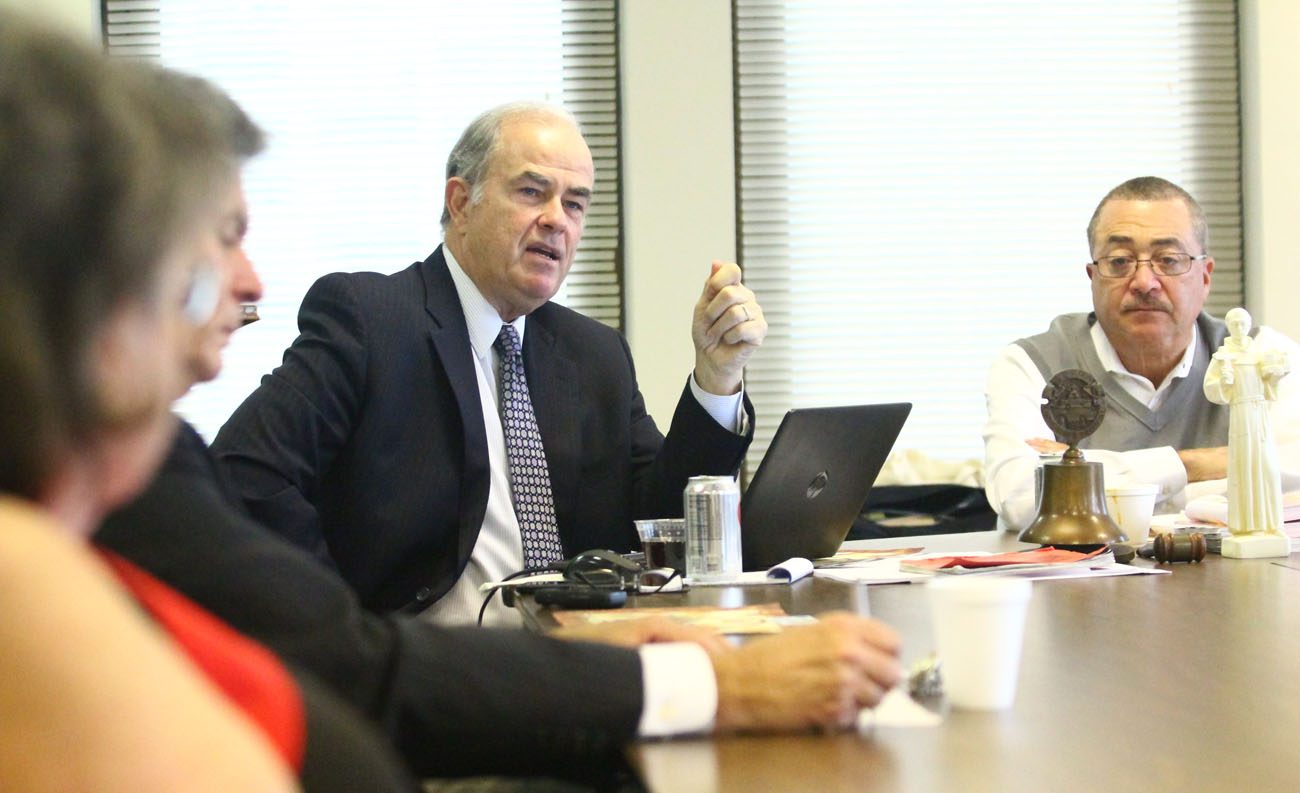 Bill McCusker, an author, businessman and husband and father of two, makes a point about the value of fatherhood at the Dec. 6 meeting of the Serra Club of Philadelphia, whose president, Royal Brown, is at right. The club promotes vocations to religious life. (Photo by Sarah Webb)

When one mentions the Serra Club in Catholic circles, the topic of religious vocations, especially vocations to the priesthood, comes to mind. Others might confuse it with the environmental group with a similar name.

In fact the only purpose of the Serra Clubs, named for St. Junipero Serra, is to promote vocations through prayer and action, although at their local club meetings they might also include a speaker on topics of interest to Catholics in general.

The Serra Club of Philadelphia, one of several Serra groups within the Archdiocese of Philadelphia, has a lunchtime meeting on the first and third Tuesday of the month at the Archdiocesan Pastoral Center. The speaker at the Dec. 6 meeting was Bill McCusker, a New Jersey business consultant who promotes fatherhood in the family sense rather than the clerical sense.

A graduate of Notre Dame and the University of Michigan and the married father of two, he is the founder and CEO of non-profit Fathers and Family Inc. (see the website here) and the author of “Fatherhood: In Pieces” with testimony from the experience of fathers in various walks of life (buy the book here).

In his talk McCusker quoted statistics on the number of children living without fathers in their home and how the phenomenon has grown in just a few decades.

“Children living in homes without a father have a poverty rate of 43 percent,” he said. “For me it is one of the root causes of many of the problems we see in society.”

“Now, more than ever, fatherhood is critically important. We need good fathers,” he told the Serrans. “We need their courage and their strength, we need their good humor and hard work, and we need their protection, judgment, perseverance and love.

“Fathers, along with loving mothers, offer our kids, our families, our communities and our country the best opportunity to grow and survive.”

The heart of “Fatherhood: In Pieces” is culled from 35 taped interviews where fathers were encouraged to discuss what values they brought to the process, what their relationship was with their children and with their spouse, and how they handled behavior issues in the family.

At the end of the day, McCusker concluded, the best way to raise kids is in a family with a loving mother and loving father.

NEXT: 5,000 pounds of food from Goya will feed hungry families