The magi read the writing in a star

“Avoid major purchases and drink more water.” My friend Veronica looked up from her magazine and scowled. “That’s the stupidest horoscope I’ve ever read.”

“They’re all stupid,” I said. “And anyway, Catholics aren’t supposed to consult them.”

“What about the wise men? They were astrologers. And they found the Christ child.”

“Well…” I was perplexed. She had me there.

“Typical Pisces,” Veronica laughed. “You’re trying to wriggle out of a tight spot.”

Actually, both of us were right. Catholics aren’t supposed to engage in any form of divination, including astrology, since such activities “contradict the honor, respect, and loving fear that we owe to God alone” (Catechism of the Catholic Church, 2116). At the same time, the wise men who paid tribute to the newborn Christ were most likely astrologers (Matthew 2:1-12).

The early Christian Church generally rejected astrology, which was developed by the Babylonians and later practiced throughout the Greco-Roman world. However, the magi of Matthew’s Gospel revere the infant Jesus, and many Christian writers concluded they were righteous Gentiles who had found God through the natural revelation of a divinely ordained star.

St. Ambrose of Milan even points to an Old Testament predecessor of the magi: Balaam, who in Numbers 24:17 prophesied that “a star shall arise out of Jacob.” Ambrose asserts that the wise men are “heirs of faith,” since “(Balaam) saw the star in spirit, (while) they saw it with their eyes and believed.”

The star of Bethlehem signaled the triumph of Christ over the pagan concept of fate. Liberated by a Savior, man was no longer a prisoner of the cosmos, as St. Ignatius of Antioch declared:

“Thence was destroyed all magic, and every bond vanished; evil’s ignorance was abolished, the old kingdom perished, God being revealed as human to bring newness of eternal life.”

Rather than predicting his destiny, the heavens humble man so that he might be fitted to receive the gift of salvation. In Genesis 15:5, the Lord dazzles Abraham with a sweeping promise: “Look up at the sky and count the stars, if you can. Just so … will your descendants be.”

Isaiah echoes this call to raise our gaze and lower our ambition: “Lift up your eyes on high and see who created these: He leads out their army and numbers them, calling them all by name. By his great might and the strength of his power not one of them is missing!” (Isaiah 40:26).

And poor Job gets a stern lesson in both astronomy and humility from God:

“Have you tied cords to the Pleiades, or loosened the bonds of Orion? … Do you know the ordinances of the heavens; can you put into effect their plan on the earth?” (Job 38:31, 33)

Through telescopes and technology, modern man has certainly sought to learn “the ordinances of the heavens,” but he remains awestruck. Carl Sagan, the renowned astronomer, was stunned by a 1990 image from NASA’s Voyager I craft, which showed earth as a mere “pale blue dot” in space (at right). 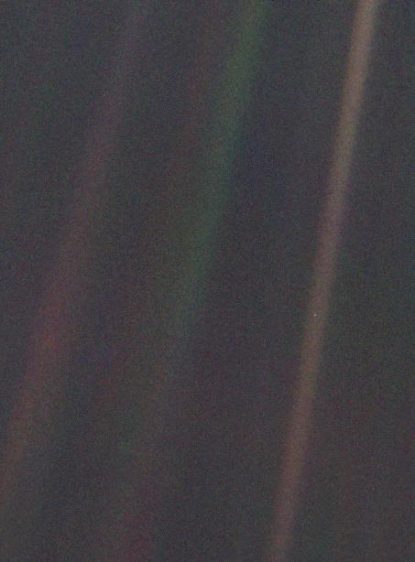 This narrow-angle color image of the Earth, dubbed “Pale Blue Dot,” is a part of the first ever “portrait” of the solar system taken by Voyager 1. The spacecraft acquired a total of 60 frames for a mosaic of the solar system from a distance of more than 4 billion miles from Earth and about 32 degrees above the ecliptic. From Voyager’s great distance Earth is a mere point of light, less than the size of a picture element even in the narrow-angle camera. Earth was a crescent only 0.12 pixel in size. Coincidentally, Earth lies right in the center of one of the scattered light rays resulting from taking the image so close to the sun. (NASA/JPL, Sept. 12, 1996)

“That’s home … a mote of dust suspended in a sunbeam,” he later wrote. “There is perhaps no better demonstration of the folly of human conceits than this distant image of our tiny world.”

More breathtaking still, a boundless God chose to be born as a tiny infant in this tiny world. And while theologians have debated whether the magi rightly found him through an ancient but superseded magic, biblical scholars now focus on a more pressing question: why did Matthew and Luke include the infancy narratives in their Gospels?

Neither Mark nor John describe the birth of Jesus; for them, his earthly mission begins during his adulthood, although John’s exquisite prologue reminds us that Jesus was eternally present with God (John 1:1-18).

But the Church came to understand that from the moment he took flesh, Christ was truly mankind’s Savior – although the fullness of that salvation would not be revealed until his death and resurrection.

Matthew’s infancy narrative, which features the magi, “is the essential gospel story in miniature” according to biblical scholar Father Raymond E. Brown. “The divine declaration of sonship, once attached to the resurrection and then to the baptism, is now attached by an ‘angel of the Lord’ to the conception of Jesus in the womb of the Virgin Mary.”

And from the beginning some, such as Herod, would reject this redeemer while others would honor him. “Of the latter the magi are truly the forerunners, the anticipation of all those who would come to worship the risen Jesus proclaimed by the apostles,” writes Father Brown.

Even in the light of that star, the magi saw the shadow of the death that Christ would one day conquer. They were “warned in a dream not to return to Herod,” who would seek to kill the child (Matthew 2:12).

The magi returned to their country forever changed, as the poet T.S. Eliot writes:

“Were we led all that way for Birth or Death?
… We returned to our places, these Kingdoms,
But no longer at ease here ….”

Having knelt before the manger, we too find our own magic and our own kingdoms unsatisfactory, and we gladly lay them aside for the lasting treasure of Christ.

Gina Christian is a writer in Philadelphia and a member of St. William Parish.

PREVIOUS: Another writer goes on defense for his ‘football priest’

NEXT: Readings of the holy Mass – Epiphany of the Lord