Area pro-lifers get inside look at insidious abortions 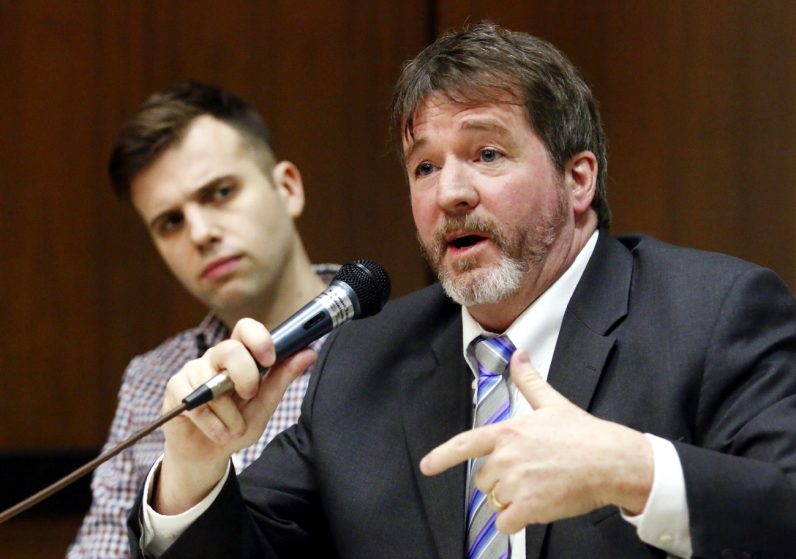 J.D. Mullane, a columnist for Calkins Media, answers a question about the trial of Kermit Gosnell during the Pro-Life Summit Jan. 14 at the Archdiocesan Pastoral Center. Filmmaker David Altrogge, who created the documentary “3801 Lancaster: An American Tragedy,” looks on. (Photo by Sarah Webb)

Leadership and activists in the Philadelphia-area’s pro-life community gathered for a Pro-Life Summit meeting on the afternoon of Saturday, Jan. 14 as a prelude to the anniversary of the 1973 U.S. Supreme Court’s Roe v. Wade decision legalizing abortion on demand throughout the country — a decision pro-lifers can never accept as final.

This year’s observance began with the 12:05 p.m. Mass in the chapel of the Cathedral Basilica of SS. Peter and Paul and continued with a meeting, sponsored by the archdiocesan Office for Life and Family, at the adjoining Archdiocesan Pastoral Center.

In lieu of the usual motivational speeches at such gatherings, this year’s program centered on the presentation of a 57-minute documentary film, “3801 Lancaster: An American Tragedy.”

You probably haven’t seen it, but perhaps you should. It’s about the notorious abortion facility right here in Philadelphia at that address that was conducted by Dr. Kermit Gosnell.

The documentary, which was produced by David Altrogge and released in 2015, was presented in its entirety and followed by a presentation by J.D. Mullane, the writer/columnist from the Bucks County Courier Times. He along with Kirsten Powers of USA Today was instrumental in shaming the mostly pro-abortion mainstream press into reporting on a story that placed abortion in a negative light.

Mullane’s chief contribution was at an opening session of Gosnell’s trial, when he was the only member of the media present. He snapped a picture showing the completely empty press seats in the courtroom. The photo, which was widely circulated on the internet, was interpreted as proof positive that the press was biased on this issue.

Mullane told of receiving a call from one national news network accusing him of doctoring the picture. In the end the national and international media did came to Philadelphia and it was quite a trial, ending in Gosnell’s conviction on murder and manslaughter charges.

Altrogge’s documentary does not rely on lurid footage. There are not dismembered babies, just those pictures necessary to show Gosnell’s technique.

It begins by talking to people — friends, relatives and neighbors — who knew and actually liked Gosnell, and were in denial or dumbfounded that he could do such things. There are also segments of taped interviews from the doctor himself in jail. He comes across as a likeable, persuasive man, which he is. But he committed horrifically evil acts and still denies he did anything wrong.

Then there were testimonies from women who in desperation used his services and from officials who finally caught up with him.

Gosnell was not just an abortionist. He would perform abortions at all stages of pregnancy but he specialized in the late-term abortions most providers would not do because they were illegal.

Nevertheless, according to testimony in the documentary, some of these same providers were willing to refer the late-term cases to Gosnell who had no scruples in such matters.

There were many problems at the Women’s Medical Society, the innocuous name given by Gosnell to his clinic. There were complaints made to the state governing agencies concerning the unsanitary conditions of the clinic, the death of a patient, the transmission of diseases to patients, untrained staff and coercion of juveniles to have an abortion against their will.

No matter what was reported, nothing was done to discipline Gosnell. Mullane traces this back to the administration of Pennsylvania Gov. Tom Ridge (1995-2001), who succeeded the very pro-life Gov. Bob Casey, who was pro-life to the point that he was literally ostracized by the Democratic Party.

In Ridge’s Administration, there seems to have been an unwritten policy put in place that no abortion clinics would be investigated or prosecuted, no matter what. This policy remained in place in succeeding administrations and as a matter of fact, no abortion clinic, including Gosnell’s, was inspected by any oversight agency for 15 years. As it was observed in the documentary, there was more oversight of beauty parlors than of abortion clinics.

In 2003 the horrific practice of partial birth abortions was officially banned and the ban was upheld by the Supreme Court three years later.

Under partial birth abortion, usually labor was induced and at the point of delivery, with the body partially outside the mother, a procedure was performed to kill the baby. Legally it was not murder because the child was not fully delivered before death.

Gosnell practiced an even more gruesome technique for near-term babies. The mother would be induced and after the baby was completely born the neck would be pierced and the spinal column severed to kill the living child. This was clearly murder, but no one reported it.

Gosnell’s downfall came about from unexpected cause. Although he was making a fortune from his abortion business he was suspected of trafficking in prescription drugs. A police raid in February 2010 uncovered the true situation at the clinic and after a grand jury report Gosnell was arrested and tried.

In a bid to avoid the death penalty, Gosnell accepted a plea bargain and was sentenced to life in prison without parole.

After the fact, oversight of abortion clinics has become more strictly enforced. But despite Gosnell’s example it has not stopped the abortion industry, including Planned Parenthood, from coming up with other means of simply killing the child in utero, not as bloody but just as effective. And no one goes to jail.

You don’t have to go to a pro-life meeting to view filmmaker Altrogge’s straightforward presentation of the facts in “3801 Lancaster: An America Tragedy.” The full documentary can be found online at Amazon, YouTube, iTunes, Google Play and VuDu.com. 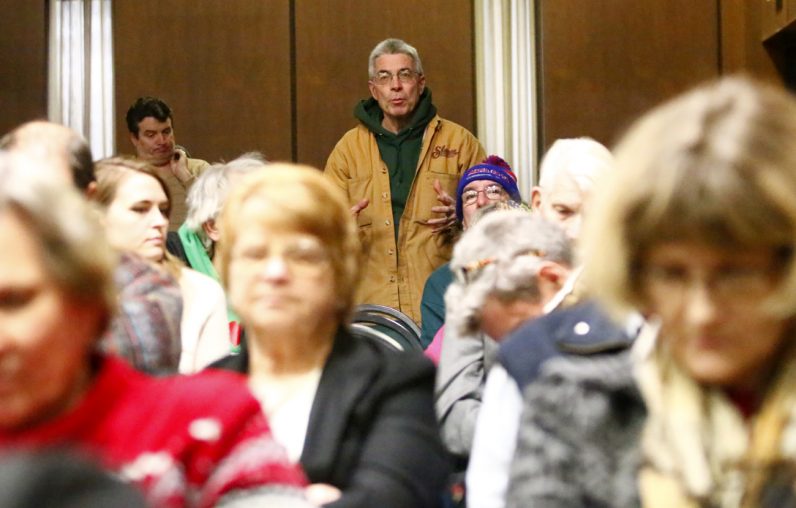 Patrick Stanton asks a question during the discussion part of the Pro-Life Summit Jan. 14 at the Archdiocesan Pastoral Center in Philadelphia. (Sarah Webb).

NEXT: Catholic Charities Appeal aims to give hope to all in need