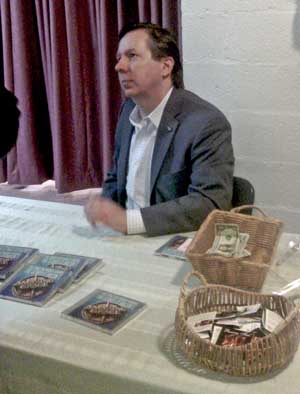 A man attending the pro-life rally Jan. 22 at St. Katherine of Siena Church in Northeast Philadelphia distributes information and materials in support of the pro-life movement.

About 150 Catholics committed to the pro-life movement held their first Stand Up for Life Rally in Northeast Philadelphia on Sunday, Jan. 22, the anniversary of the U.S. Supreme Court’s 1973 decision legalizing abortion in the United States.

The participants in the program at St. Katherine of Siena Church showed a sense of hope and determination to continue their efforts on behalf of unborn human life.

In his opening prayer, Father Joseph Zaleski, parochial vicar at St. Katherine’s, thanked God “for the gift of life.”

Those in attendance heard from Christopher Smith, the composer and creator of the Broadway musical “Amazing Grace.” In his reflection on the play Smith talked about how the play’s character John Newton stood against slavery, just like pro-lifers are “standing for what is right by being the voice for the voiceless.”

Smith said after 17 years as a police officer he felt he was called to compose the play. The challenge he had to overcome was to balance storytelling with his faith.

Connecting his song “We Are Determined” to pro-lifers, Smith explained how hard the fight can be when it’s a long struggle. A moment in history may begin in the dark but “a small flame can ignite a movement.”

Smith went on to share a story of how his mother was pregnant with him in 1969. At the time, she “did not want to break the law” by choosing an abortion. Eventually his mother chose life for him. He ended his talk urging people to “continue to win, move, and help people.”

Katelyn D’Adamo, a second-year missionary with Generation Life, told how her work has moved her into changing hearts and minds while cultivating the pro-life message through the virtue of chastity.

“Young people are hungry for the truth.” D’Adamo said. “We must get the truth out there.”

She reflected on how during a recent presentation to students she correlated abortion with slavery and the holocaust. The students were fixated on the message on one slide of the Power Point presentation that showed despite the opposition faced by many people, “they kept speaking out about the injustice.”

The final speaker was Patrick Stanton, the son of the late pro-life advocate John Stanton. Describing how Rev. Dr. Martin Luther King Jr. wrote a letter from his prison cell in Birmingham to convey the message of the civil rights movement, Stanton said, “we must defend the law of God that all life is precious.”

Stanton told about the impact of the 40 Days for Life campaign of prayer and witness throughout the Philadelphia area.

“Think about the lives saved, hearts and minds changed, because of your involvement.” Stanton said.

“It was heartening to see the number of people who attended the rally and also to see younger people in the pews,” Flynn said.

Tom Lacey of nearby St. Dominic Parish also took away a feeling of hope from the rally. He found it encouraging to see a hopeful message inspiring many pro-lifers who lovingly offer help for women in crisis pregnancies.

“With God’s grace we can be successful in helping both the mother and their child,” Lacey said.