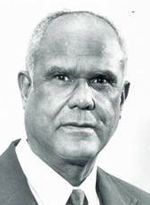 Born in Skipwith, Virginia, one of 10 children of the late Edward C. Smith and the late Adele Pettus, he graduated from Benjamin Franklin High School in Philadelphia, with further studies at the College of Military Science, Lincoln Preparatory School and La Salle University.

He was a decorated U.S. Army veteran with service in World War II, with further active duty and reserve duty, retiring as a Chief Warrant Officer.

Most of his civilian working career was at the Philadelphia Navy Yard where he rose to become superintendent of the Transportation Shop.

Married to Marguerite Green in 1948, he became an active member of St. Benedict Parish. He and his wife were parents of three children and were married 65 years until Marguerite’s death in 2013.

At the request of Father George C. Moore at St. Benedict, Deacon Smith entered the diaconate program and was ordained May 29, 1988 by Archbishop Anthony Bevilacqua at the Cathedral Basilica of SS. Peter and Paul.

One of Deacon Smith’s proudest moments was serving as one of the deacons distributing holy Communion at the beatification Mass for Mother Katharine Drexel at St. Peter Basilica in Rome with Pope John Paul II in 1988. He retired from ministerial duties at St. Benedict’s in 2010.

Although St. Benedict has since become a worship site of St. Athanasius Parish, Deacon Smith remained a faithful member, according to Father Joseph Okonski, St. Athanasius’ pastor, who visited Deacon Smith and administered the sacrament of the anointing of the sick shortly before his death.

Ted Travis, the administrative assistant at St. Athanasius, remembers how involved Deacon Smith was in all phases of the parish, not only spiritual but temporal, assisting the pastor in making financial decisions and having membership in many parish groups.

“He was involved in everything and had a very full life,” Travis said.

“He was a tremendous person, an upright man,” he said. “I saw him as the image of a deacon. He never pulled his punches and was a man of his word. I was blessed in all that he contributed to my ministry.”

The funeral Mass for Deacon Smith was celebrated Dec. 28 at St. Benedict Church with Bishop Timothy C. Senior as the principal celebrant. The deacon of the Word and also the homilist was Deacon Mahoney. Deacon William C. Bradley assisted at the altar.

NEXT: Deacon Eugene Leahy buried from his life-long parish, Holy Family in Manayunk