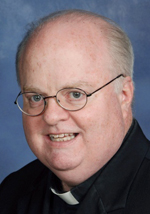 He entered St. Charles Borromeo Seminary in 1998 and was ordained May 18, 2003 by Cardinal Anthony Bevilacqua at the Cathedral Basilica of SS. Peter and Paul. His first assignment was as parochial vicar at St. Alphonsus Parish, Maple Glen.

He then entered graduate studies at the Pontifical Gregorian University in Rome where he received a Sacred License in Theology with a specialization in dogmatic theology. He taught part time at St. Charles Borromeo Seminary and served as parochial vicar at Our Lady of Mount Carmel, Doylestown, and St. Bernadette of Lourdes, Drexel Hill.

He took up his duties as pastor of Sacred Heart in southern Chester County just two months ago.

In his initial parish bulletin note to his congregation, he wrote, “When Archbishop Chaput assigned me to be the new pastor of Sacred Heart Parish, he instructed me, via the Vicar for the Clergy, to remember two important things. First he told me to be kind to the people of our parish, and second, he told me to stay here. I intend to do both and I want to say to you, once again, that I am glad to be with you here in Oxford, Chester County, for my first assignment as a pastor and I look forward to many rewarding experiences and wonderful years with you, celebrating our Catholic Faith together.”

His death at his rectory came as a shock to the parish, where he was well liked in his short term as pastor, according to Father Joseph Shenosky, who performs weekend ministry at Sacred Heart, and knew Father Crowley well.

Msgr. Paul Dougherty, who preached at Father Crowley’s first Mass, first met him when he was assigned to St. Charles Parish and Father Crowley was still a high school student.

“Even in high school he had a love for the faith and a great respect for the priesthood,” Msgr. Dougherty said. ‘We kept in touch. Then when I was teaching at the seminary he was a seminarian and very disciplined. He enjoyed his studies and he enjoyed being a parish priest.”

“Growing up we played a lot of sports together; we were very involved in hockey, track and basketball,” recalls his brother, Michael. “He did well in school and his work, he put his heart into everything he did. I was a little surprised when he told us one day he had a calling. He was very kind and he put his heart into whatever he did.

“I will remember that he was very kind and when he celebrated Mass his homilies were very clear,” Michael Crowley said. “You could tell it was his calling when you watched him elevate the host at Mass. We have plenty of good memories of him.”

Father Sean O’Neill, who will preach at Father Crowley’s funeral Mass, was a seminary classmate and has remained a good friend ever since. He recalls Father Crowley really started his formation at a Carmelite foundation but transferred to St. Charles when he realized his call was to be a parish priest.

“We would get together almost every week,” Father O’Neill said. “He was a humble guy, but very passionate about being a priest. He was a good friend and you always knew where you stood with him.

“He reminds me of what Our Lord said of Nathaniel in the Gospel, ‘he was a man without guile.’ John was like that. He loved being a priest and had a very hearty laugh.”

Although he was pastor of Sacred Heart for a very little time, “in a way he will never leave the parish,” Father O’Neill said.

There will be a viewing for Father Crowley at Sacred Heart Church on Sunday evening, Jan. 8, from 4:30 to 7 p.m. followed by a parish Mass. There will also be a viewing beginning 9 a.m. on Monday, Jan. 9, followed by his 11 a.m. funeral Mass celebrated by Archbishop Charles J. Chaput.

Father Crowley is survived by his sisters Kathleen Salute, Susan O’Neill (John), Ellen Shea (Patrick) and his brother Michael and many nieces, nephews and grand-nieces.

Interment will be in Calvary Cemetery, West Conshohocken.