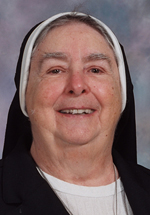 Sister Phyllis Ann Greco, O.S.F. (formerly Sister Mary Coronata), died Jan. 24 in Assisi House, Aston. She was 85 and had been a professed member of the Sisters of St. Francis of Philadelphia for 60 years.

Sister Phyllis Ann was born in Stoneham, Mass. Prior to her entrance into the congregation in 1955, she was a member of Our Lady Help of Christians Parish in Newton, Mass., and a graduate of the parish high school. She later earned a B.A. in history and an M.S. in social work. She ministered primarily in education, social work and parish ministry.

Sister Phyllis Ann ministered in the Archdiocese of Philadelphia for 20 years. She taught at St. Elizabeth, St. Bonaventure, St. Benedict, Our Lady of Consolation and St. Ludwig schools, all in Philadelphia. She later was engaged in parish social work through the Northwest Cluster of Catholic Churches and also worked with Catholic Social Services.

In 2016 she moved to Assisi House, the congregation’s retirement residence in Aston, where she served in prayer and hospitality ministry.

Sister Phyllis Ann did parish ministry and social work for 15 years in the Archdiocese of Baltimore.

Additional ministry experience included teaching at SS. Peter and Paul School in Lehighton in the Diocese of Allentown. She also served as program director for Catholic Charities in the Archdiocese of Washington and in social services in the Diocese of Arlington.

All funeral services will be held in Assisi House, 600 Red Hill Road, Aston.

A Christian wake service will be held at 9:30 a.m. Friday, Jan. 27, followed by a viewing. The funeral Mass will be celebrated at 11 a.m. Burial will be in Our Lady of Angels Cemetery in Aston.

Sister Phyllis Ann is survived by her brother, her nieces and nephews, and by her Franciscan family. Donations in her name can be made to the Sisters of St. Francis Foundation, 609 S. Convent Road, Aston, PA 19014.

NEXT: Oldest deacon in archdiocese dies at 93; ministered ‘to the very end’