Oldest deacon in archdiocese dies at 93; ministered ‘to the very end’ 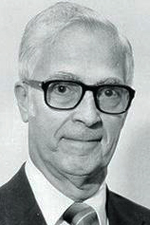 Deacon Lawrence P. Froio, 93, a permanent deacon who served St. Patrick Parish in Malvern for almost three decades until his retirement two years ago, died Jan. 25. He was the oldest permanent deacon in the Archdiocese of Philadelphia.

Technically he was retired but he remained active in ministry even in his advanced age. On Jan. 19, the day he suffered the major stroke that caused his death, he had earlier attended daily Mass and driven to a hospital for holy Communion calls.

This was typical Deacon Froio, whom fellow deacons referred to as the “dean of deacons” in the archdiocese, according to Deacon Michael Pascarella Jr., associate to the Vicar for Clergy of the archdiocese. “He fulfilled his ministry right up until the very end,” he said.

Deacon Froio was originally from Chicago, Ill. After two years of college at Northwestern University, he served during World War II as a medic in what was then the Army Air Corps in California and India.

It was while in the service he met his future wife, Suzanne (Sue) Matsinger, who was serving in the chow line. They married in 1946, and even at that point he must have been a bit of an evangelizer. Sue converted to Catholicism before the wedding, according to their grandson, Gregory Froio.

After military service he took employment with the Pennsylvania Railroad and relocated to the Philadelphia area in 1955. Shortly after, Larry and Sue joined St. Patrick Parish, where they became active members and where they raised their three sons. Sue died in 2010.

After his retirement from Conrail in 1983 Larry entered the diaconate program and was ordained May 25, 1986 by Cardinal John Krol at the Cathedral Basilica of SS. Peter and Paul and assigned to his home parish.

“He was a loving, caring soul,” his grandson said. “He would give the shirt off his back to anyone. His life revolved around the church and sports. He and my grandmother would attend every game we played and afterwards he would always give us a folded dollar bill. I guess you could say we were paid to play.”

In all of Deacon Froio’s duties Sue would accompany him, and she was as much a part of the parish ministry as he. In gratitude the school library was renamed “The Larry and Sue Froio Memorial Library.”

Pat Wood, a parish worker recalls “Deacon Larry” as a “dedicated man who served unselfishly. So many of us are thankful to him for our faith life,” she said. “He was a pleasant, joy-filled man, and nothing was too much for him. We were so fortunate to have him and his wife with us.”

As long as he could, Deacon Larry remained active in many ministries such as training generations of altar servers, performing baptisms and visiting the sick, and leading a rosary group.

Father Christopher Redcay, St. Patrick’s pastor, said, “He was 88 when I came and his greatest fear was that I would make him retire. I told him there would always be a place for him. He never tired. He was always thinking about bringing people to the faith, working for the church. He was a blessing to all of us.”

Even in his eventual retirement he was a fixture at daily Mass and a dinner guest at the rectory each week, Father Redcay said.

Bishop John McIntyre will be the principal celebrant. Concelebrants will include Msgr. Ralph Chieffo, Norbertine Father Arul Amalraj, Father Kevin McCabe and Father Redcay, who will be the homilist. The deacon assisting at the Liturgy of the Word will be Deacon A. Gerald Harrison; Deacon Daniel Delucca will assist at the altar. Deacon chaplains will be Deacons Louis Libbi and Robert Stewart.

Deacon Froio is survived by his sons Joseph (Donna) and Michael (Ann), daughter-in-law Kimberly Froio, nine grandchildren and eleven great-grandchildren. He was predeceased by his son, Thomas, who died in December 2016.

Interment will be at St. Agnes Cemetery, West Chester.

NEXT: Bishop Lohmuller: A long, rich life in service to the church