Prayer, faith and good health: They absolutely go together 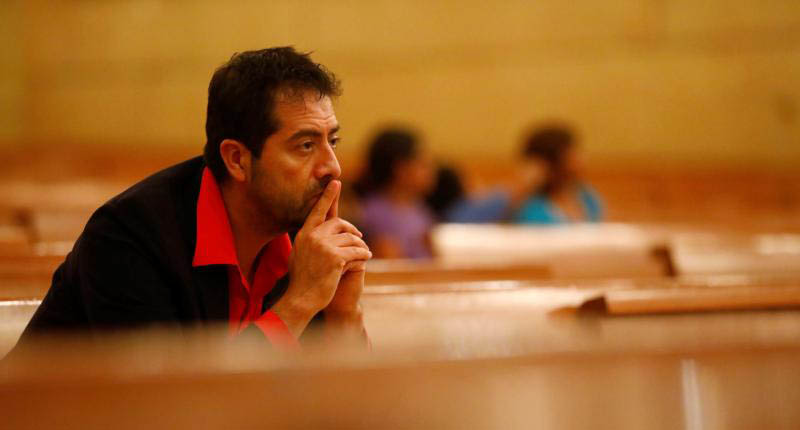 Ernesto Vega listens during a Nov. 10, 2016, prayer service at the Cathedral of Our Lady of the Angels in Los Angeles. Duke University’s Center for Spirituality, Theology and Health reported in 2015 that an analysis of more than 1,500 reputable medical studies indicates people who are more religious and pray more have better mental and physical health. (CNS photo/Patrick T. Fallon, Reuters)

Can prayer, faith and belief in God make you healthy — physically, as well as spiritually and emotionally? Yes, according to dozens of studies over the past 20 years.

In fact, Duke University’s Center for Spirituality, Theology and Health reported in 2015 that an analysis of more than 1,500 reputable medical studies “indicates people who are more religious and pray more have better mental and physical health,” according to Dr. Harold G. Koenig, center director and among the country’s leading authorities on faith and healing.

Moreover, “of 125 studies that looked at the link between health and regular worship, 85 showed regular churchgoers live longer,” Koenig told Newsmax Health. “Studies have shown prayer can prevent people from getting sick — and when they do get sick, prayer can help them get better faster.”

Koenig — senior author of the “Handbook of Religion and Health” — said a study published in the Southern Medical Journal demonstrated that prayer sessions for patients with hearing and visual deficiencies led to “significant improvements based on audio and visual tests.”

“Devout” religious practice, he added, such as involvement in a faith community, enables people to better cope with stress, experience greater well-being “because they have more hope,” and have stronger immune systems, lower blood pressure “and probably better cardiovascular functioning.”

Koenig further reported that nearly 1,200 studies done on the effects of prayer on health show that religious people tend to live healthier lives — “less likely to smoke, to drink, to drink and drive.”

“Hospitalized people who never attended church have an average stay of three times longer than people who attended regularly.

“Heart patients were 14 times more likely to die following surgery if they did not participate in a religion.

“Elderly people who never or rarely attended church had a stroke rate double that of people who attended regularly.”

A WebMD article reported that research focusing on the power of prayer in healing has nearly doubled in the past 10 years. The article suggested that prayer, because of its repetitive nature in sounds and words, promotes “healing effects,” according to Dr. Herbert Benson, director emeritus of the Benson-Henry Institute for Mind Body Medicine and professor at Harvard Medical School.

Among the first Western physicians to bring spirituality and healing into medicine, Benson told WebMD that his studies over the past 30 years indicate that all forms of prayer — such as the rosary or Buddhist meditation — “evoke a relaxation response that quells stress, quiets the body and promotes healing.”

In March 2015, research published in the Journal of Reward Deficiency Syndrome found that weekly attendance at a religious service, praying often and reading religious books all appear to prevent recovering substance abusers from relapsing and again using cocaine, heroin, marijuana or alcohol.

“The strongest association between remission and spirituality,” the study added, “involves attending religious services weekly,” due to its connection to social interaction and bonding — in other words, a regular and trusted support system.

Clay Routledge, social psychologist and professor of psychology at North Dakota State University, writes of numerous studies showing that prayer can improve an individual’s emotional and mental state, which can result in better physical health.

Those who pray, he said, are more self-controlled, less aggressive, more forgiving and more likely to offset “the negative health effects of stress,” including high blood pressure.

Additionally, said Routledge, recent studies found that “having people pray together with a close friend increased feelings of unity and trust. This finding is interesting because it suggests that praying with others can be an experience that brings people closer together. Social prayer may thus help build close relationships.”

At the same time, Routledge acknowledges that there can be risks to relying exclusively or primarily on prayer for good health:

— Religion can offer people a way to avoid their health issues, as expressed in phrases like, “It is in God’s hands.” In other words, Routledge said, “they can pass the buck to God,” an approach that prevents maintaining and improving health.

— Religion also can direct people away from conventional medical treatment. This is especially true, Routledge said, of those with a fundamentalist view of religion, based on studies he conducted in which participants were asked if they supported the position to deny medicine and rely on faith alone when dealing with an illness.

In that light, it is not surprising that a five-year study on patients with congestive heart failure (published in Health Psychology in 2015) showed that those who reported feeling spiritual peace — and who also made some healthy lifestyle changes — were significantly more likely to live longer than their peers.

PREVIOUS: Divine connection: The positive effects of prayer on health

NEXT: The power of prayer and your physical health