Bishop Lohmuller laid to rest in cathedral beside Cardinal Krol 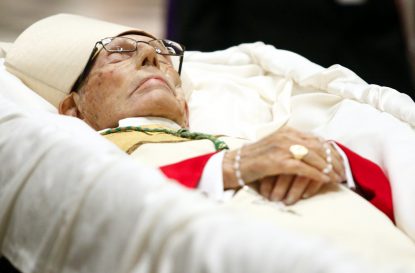 Bishop Martin N. Lohmuller, who died Jan. 24, was laid to rest on Wednesday, Feb. 1 in the crypt of the Cathedral Basilica of SS. Peter Paul following his funeral Mass.

(See a photo gallery from the funeral Mass here.)

His vault is adjacent to that of Cardinal John Krol, and the location was most appropriate. As an auxiliary bishop for the archdiocese, he was literally the cardinal’s right hand man from his ordination as a bishop in 1970 until Cardinal Krol’s retirement in 1988.

Archbishop Charles J. Chaput, who was the principal celebrant at the funeral Mass, took note in his remarks of how important Bishop Lohmuller’s work was for the church both in Philadelphia and in Harrisburg, where he was on loan for over two decades.

Among other achievements mentioned by the archbishop was Bishop Lohmuller’s foundational work in the establishment of the Pennsylvania Catholic Conference, his care for religious sisters and his living up to his episcopal motto, “Love Fidelity, Peace.”

The homilist for the funeral Mass was Msgr. Robert Powell, who was associated with Bishop Lohmuller for many years, first as an assistant and most recently his host at St. Cyril of Jerusalem Parish in Jamison, where Bishop Lohmuller lived in quiet retirement during his final years.

He recalled when Cardinal Krol first asked him to assist Bishop Lohmuller, who was the Vicar in Curia overseeing the archdiocese on a daily basis, he expressed his reluctance to take the assignment.

Msgr. Powell found this to be absolutely true. “He was 30 years older than me and I couldn’t keep up with him,” he said in his homily. “He worked day and night, every day.”

In retirement Bishop Lohmuller would have been welcomed at Villa St. Joseph, the archdiocesan residence for elderly priests, but as he told Msgr. Powell, he really wanted to live in a parish doing parish ministry.

Msgr. Powell invited him to stay at his parish, St. Cyril of Jerusalem, where he celebrated Masses, heard confessions and took part in the parish community as long as he was able.

Msgr. Powell remembered a time in the middle of the night when the fire alarm went off, waking everyone. After ascertaining there was no emergency he went to reassure Bishop Lohmuller, but he wasn’t in his room. He ultimately found him in the rectory chapel.

“I asked him why he was there and he said. ‘I wanted to protect the Blessed Sacrament,’” Msgr. Powell related in his homily.

Among the bishops, priests, religious, laity and relatives at Bishop Lohmuller’s funeral, there were many with fond memories.

“When I was a young priest in the Tribunal I remember well (that) he was a wonderful administrator,” Bishop Fitzgerald said. “Msgr. Powell captured it when he said (Bishop Lohmuller) was Cardinal Krol’s right hand man, and the cardinal was able to do what he did because of his help. Cardinal Krol was a great delegator, and between the two of them they did a wonderful job.”

Kathy Kelly, a long-time archdiocesan employee, remembers Bishop Lohmuller as a perfect gentleman. “In the cafeteria he would stop and say hello to everybody at the tables. He was a good priest, dedicated to the church.”

Growing up in North Philadelphia, Bishop Lohmuller had one brother, Herbert, now deceased. He and his wife, Genevieve, the parents of 10, relocated in Indiana. Herbert is deceased but most of the family including Genevieve, now 92, came in force for the funeral.

“He was the one who introduced me to my husband,” Genevieve Lohmuller said. “We thought a lot of him and every holiday he was with us.”

Martin Lohmuller, one of the bishop’s nephews, recalled how much he taught the family and how he was there for all of the baptisms, confirmations and weddings.

“He liked Trivial Pursuit, but nobody wanted to play it with him or my father because they could answer most of the questions perfectly,” he said.

Father Thomas Sodano, pastor of St. Joseph Parish in Collingdale, was among the many priests who came to concelebrate at Bishop Lohmuller’s funeral Mass.

“He loved parish work and it is a credit to him that he wanted to be in a parish after he retired and not just in a house,” Father Sodano said.

Sister Rosemary Herron, R.S.M., was among a number of women religious who attended Bishop Lohmuller’s funeral. She is the president of Mercy Career and Technical School, the only Catholic vocational school in the archdiocese.

The school was founded in 1950 on a former site of Mercy Academy, but by 1972 the old building was too deteriorated to repair, and it was likely the school would close.

“Bishop Lohmuller saw the value of a technical education and he mentioned to our Superior Mother Bernard that the Old St. Joseph’s Home for Girls building was available,” Sister Rosemary said.

Mercy moved to that location and while they later moved to the former Corpus Christi School in North Philadelphia, Bishop Lohmuller remained a friend over the years, presiding at many graduations.

“Just last year he called us to see how we are doing,” Sister Rosemary said.

Now Bishop Lohmuller is in his final resting place, but his good works performed so often behind the scenes are his lasting testimonial.