In after-school programs, the kids are in good hands 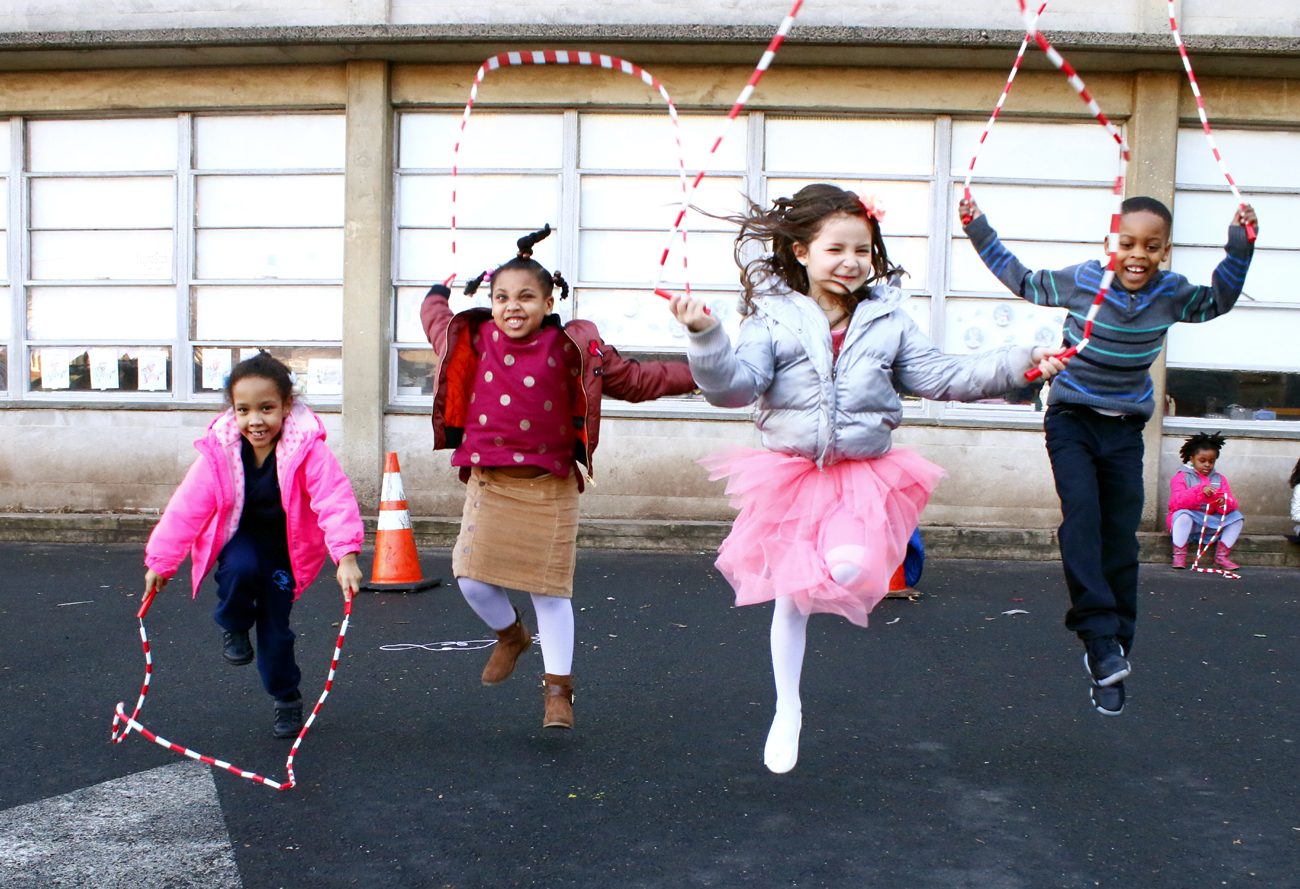 Children play outside after school in the Out of School time program at St. Helena School in Philadelphia's Olney section. (Photo by Sarah Webb) 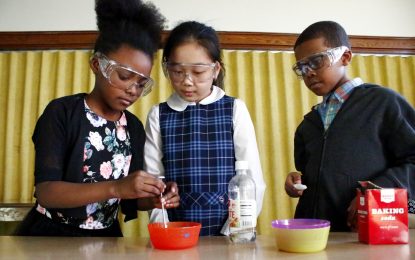 Out of School Time (OST) programs are playing an increasing role in the educational landscape and are especially a boon for families where the parents work and cannot pick their children up when the school bell rings.

In the City of Philadelphia a number of such programs are funded mostly through the Department of Human Services working through various providers, including Catholic Social Services (CSS).

Currently CSS has OST contracts for 15 programs at 12 sites, mostly in low or moderate income neighborhoods. They utilize existing school facilities and operate for several hours after school closes and generally conduct all-day summer programs too.

The proof of their effectiveness is the testimony of users.

“They are my salvation,” said Maria Reyes, the mother of five, with her two oldest – Isaiah, 8 and Elijah, 6 — enrolled in the OST program based at their school, Holy Innocents, in Lower Northeast Philadelphia.

“It’s a big help to me, knowing I can go to work knowing they are in a safe environment,” she said. “School ends at 2:30 and I work until 5 p.m. Neither myself nor my husband are home.”

One feature Reyes especially appreciates is that along with the many activities provided, the children do their homework under the guidance of the staff.

“It is usually done and done well,” she said. “When I get home I have to cook and prepare everything for the next day. I do review their work with them, but I don’t have to do as much.” 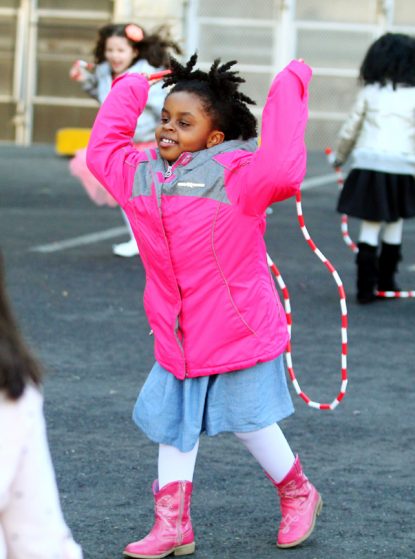 Juliet Thompson enjoys jumping rope at St. Helena’s OST program. Many of the children did not know how to jump rope until learning how through the program. (Sarah Webb)

Reyes considers the cost of $65 a week for the two children minimal because of what they are getting. As a social worker herself, working mostly with teen parents, she appreciates the struggle her clients have in finding adequate programs for their children.

As for the Holy Innocents OST, “my kids love it,” she said. “They love the programs, the summer camp and the field trips. On Presidents Day they were off school and went bowling.”

“The programs are going well,” said Healey-Wilson, herself a former site administrator at Holy Innocents. She finds OST “keeps the kids out of trouble and keeps them occupied including at the great summer programs. We have waiting lists for some of them and we could probably do more sites.”

According to Dee D’Aulerio, the administrator at Holy Innocents OST, the program averages 85-90 kids but swells to 150-180 for the summer camp.

The school weekday program operates 2 to 6 p.m. out of the St. Lucy Day School building on the Holy Innocents campus.

“Most of our students are from the Holy Innocents School but about 1 percent are from public schools,” D’Aulerio said. 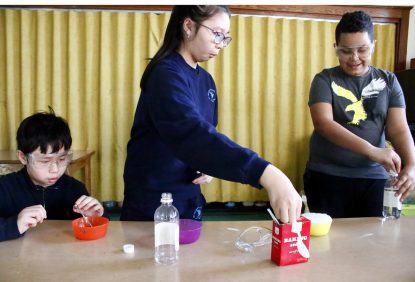 “We provide them with a cold supper though (archdiocesan) Nutritional Development Services, we do homework, we have physical fitness, we have math, science and reading programs especially helping the children to learn to read,” she said.

Considering the size of the program the children are well supervised through a staff of 11, including three full-time employees.

The program is certainly not all work, and among the activities are art, music, basketball, soccer, baseball and football.

“The kids like the program; they have fun and can run and get their energy out,” D’Aulerio said. “We do robotics with students from La Salle High School coming in to help.

“We have a sand box, hula hoops and pogo sticks,” she said. “Kids will tell their parent, ‘Don’t pick me up early because we are going to be playing outside.’”

The homework component is especially important at Holy Innocents and its sizable foreign-born population including Hispanics and Vietnamese. Many parents who are not fluent in English have difficulty in checking homework themselves.

At St. Helena, where about 60 kids are in the after-school program, the experience is similar, according to Marjorie McMahon, who has a staff of 10 including two full time. “The kids are upset if they miss school because then they will miss after school,” she said.

McMahon estimates 100 percent of the children have parents who work and are happy to know their children are in a safe place after school.

In addition to homework there is an emphasis in STEM programs and a program to raise the literacy level of the students conducted in partnership with the Free Library of Philadelphia.

Recently a group came from the Academy of Natural Sciences to present a program on animals, and “we are thinking about raising butterflies in a few weeks,” McMahon said. The program utilizes St. Helena School which gives it access to the gym and cafeteria.

When it came time for Pamela Bridgeforth to enroll her little girl, Juliet, in school, she thought long and hard as to where to send her before choosing St. Helena School and the after-school program, even though the family is not Catholic.

“Her father and I did a lot of research before enrolling her there,” she said. Bridgeforth loves the school and the OST program equally.

“I could not work if I did not have after-school care and that would significantly impact my family,” she said. “I’m grateful to Catholic Social Services for having this.

“They have a lot of staff who do an amazing job. I appreciate the school as well as the after-school program. It is a place where she can excel academically but more important, thrive as a person.”

Juliet, who is in second grade, is typical of many children in that sometimes her mom has to “drag her to school. She cries and says, ‘I don’t want to go,’” her mother said, “but after school she doesn’t want to leave.”

If there is a single problem, it’s the snacks served. “She does not eat the after school snacks because they ae healthy and she does not like healthy,” Juliet’s mother ruefully admitted.

But all in all, St. Helena both through the school and after-school program, “is a great little community and we are delighted with it,” Bridgeforth said. “I sing the praises of it wherever I go. It is the best place for my daughter and she thrives there.” 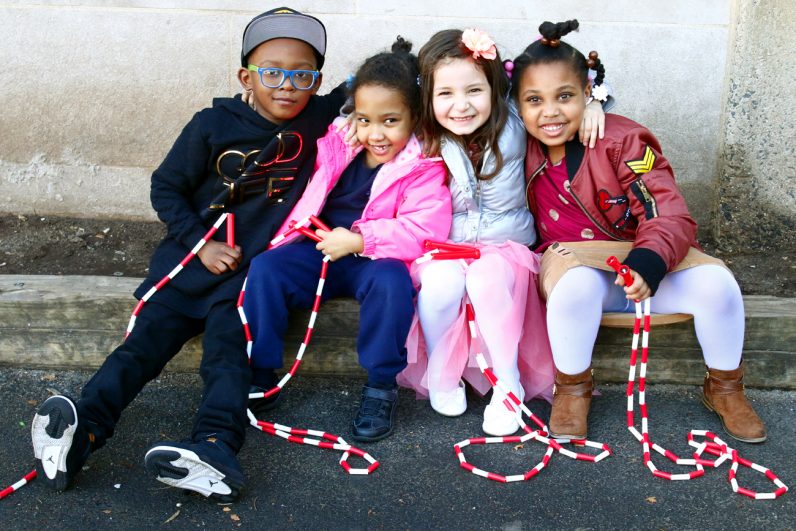 Kids at the St. Helena OST program enjoy the fresh air together after school. (Sarah Webb)

NEXT: Archbishop Chaput lauds repeal of rules for transgender students