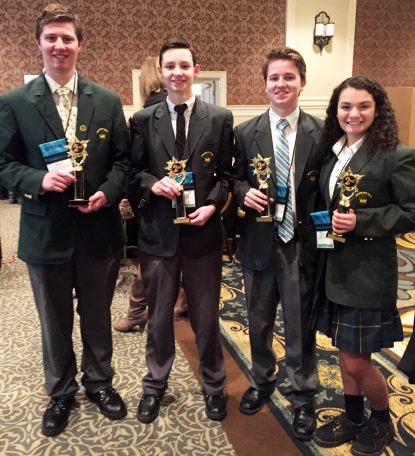 They left the arena in Hershey, Pa., carrying home trophies and a second place finish out of 70 teams from around the state of Pennsylvania.

The competition was inspired by today’s emphasis on STEM (Science, Technology, Engineering and Technology) education. It was held as part of the fourth annual Pennsylvania Educational Technology Expo and Conference held in Hershey last week.

And it carried a special twist. The students had to convince their audience that their glove wasn’t just innovative — it was worthy, theoretically at least, of capital investment. The competition was engineering and sales rolled into one.

Working as a group in one of Wood’s STEM classes, Intro to Engineering, the four students – Jacob Leinenbach, Shane Kennedy, Greg McFadden and Arianna diPalma – and their classmates were given a broad assignment by teacher Kevin McLemore: Invent something that will help people with physical or mental disabilities.

The students had three weeks to come up with an idea, research a solution and engineer and complete the glove itself. The four winners of the class competition made the glove from a special thin-fabric material that incorporates a series of 12-volt heating wires and a unique slip-in thermoplastic brace, providing arthritis sufferers significant relief during waking or sleeping hours.

The STEM program at Wood is in its fourth year. Unlike days of old, when science class may have consisted of tasks like memorizing the periodic table, “the direction in education today is problem solving,” said Wood Principal Mary Harkins. “We offer courses in robotics, architecture and 3D design, and other areas of engineering – even household technology.”

The hands-on approach in the classroom will likely pay off in the future because “when the students get into the working world, they’re not going to be sitting in a cubicle,” said Harkins. “They’re going to have to work as part of a team. Everyone has to carry their weight and cooperate. We also hope the approach we take in STEM classes will encourage students to use the same strategies in other classes.”

The STEM approach at Wood also offers the considerable benefit of helping students who may be generally interested in engineering but uncertain of a specific area of concentration. They can get an overview of multiple types of engineering, whether mechanical, civil, biomedical, you name it. Harkins calls it “career discernment.”

The two-and-a-half hour competition in Hershey required all student teams not only to demo their inventions for attendees, who were mostly teachers as well as some technology professionals, but also to pitch the projects’ benefits and sales potential.

“I was so proud of them,” Harkins said. “They walked up to people, introduced themselves and had people try out the glove. They were as successful in sales as in engineering.”

In fact the Wood team garnered $3,300 in investment capital from attendees. Alas, the capital was in the form of “play bucks” handed out to attendees before the competition. But play money or not, the amount “invested” in the Wood team resulted in their glove and their sales pitch being judged better than 68 other contending teams.

In addition to individual trophies, each member of the team took home a $50 Amazon gift card.

The Archbishop Wood community is basking in pride from the triumph of their four accomplished students.

“At Wood, we win,” Harkins said without apology. “We had a student who was a finalist in a Shakespeare competition last week. Our basketball team is in the Catholic League semi-finals this week.” (Wood beat Archbishop Ryan in boys basketball Thursday evening and plays for the league championship against Neumann-Goretti at the Palestra on Monday night.)

“That’s what we expect of our kids. If you’re faithful to what God has given you in talent and you use it to the best of your ability, you’ll be successful,” she said. “We expect every kid to be the best student, the best athlete, the best inventor, the best actor – the best person they can be. Because this is a Catholic school, and that’s what you ultimately want to be.”

NEXT: In after-school programs, the kids are in good hands