‘We must stand together,’ archbishop says after cemetery attack 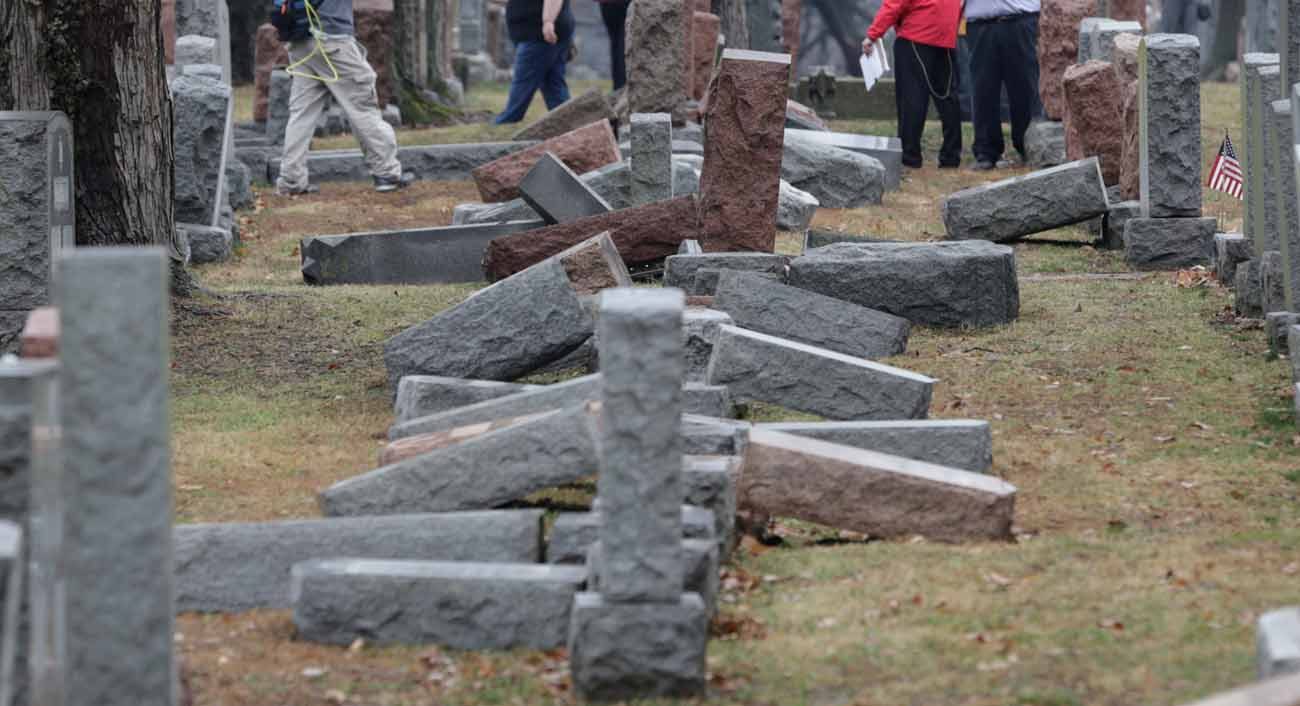 Local and national media report on more than 170 toppled Jewish headstones Feb. 21 after a vandalism attack on Chesed Shel Emeth Cemetery in University City, Mo. The incident at the cemetery near St. Louis was repeated in suburban Philadelphia Feb. 26 when gravestones were destroyed at a Jewish cemetery there. (CNS photo/Tom Gannam, Reuters)

UPDATED – PHILADELPHIA (CNS) — Responding to the destruction of some 100 gravestones at a Jewish cemetery in Philadelphia, Archbishop Charles J. Chaput Feb. 27 deplored the “senseless acts of mass vandalism.”

The gravestones were discovered toppled over from their bases the previous morning at Mount Carmel Cemetery in Northeast Philadelphia.

The archbishop issued a statement in which he called on the clergy, religious and laypeople of the Archdiocese of Philadelphia “to join in prayerful solidarity with the families of those whose final resting places have been disturbed. Violence and hate against anyone, simply because of who they are, is inexcusable.”

The incident at Mount Carmel Cemetery mirrors gravestones destroyed at another Jewish cemetery near St. Louis about a week before.

In a statement Feb. 24, the chairman of the U.S. bishops’ Committee on Ecumenical and Interreligious Affairs, expressed solidarity and support for the Jewish community and also called for the rejection of such hateful actions.

“I want to express our deep sympathy, solidarity, and support to our Jewish brothers and sisters who have experienced once again a surge of anti-Semitic actions in the United States,” said Bishop Mitchell T. Rozanski of Springfield, Massachusetts, speaking on behalf of all the bishops and U.S. Catholics. “I wish to offer our deepest concern, as well as our unequivocal rejection of these hateful actions. The Catholic Church stands in love with the Jewish community in the current face of anti-Semitism.”

Two days earlier, the National Council of Churches in a statement said that “anti-Semitism has no place in our society. Eradicating it requires keeping constant vigil.”

In his statement, Archbishop Chaput said that “for Catholics, anti-Semitism is more than a human rights concern. It’s viewed as a form of sacrilege and blasphemy against God’s chosen people. In recent weeks, our country has seen a new wave of anti-Semitism on the rise. It’s wrong and it should deeply concern not only Jews and Catholics, but all people.”

Even as the archbishop issued his statement, a new wave of fear spread for Jewish people in the United States as about a dozen Jewish community centers across the country received anonymous threats of violence.

Several centers in the Philadelphia region — including the Kaiserman Jewish Community Center, which includes a preschool, in the Philadelphia suburb of Wynnewood — had been evacuated the morning of Feb. 27 because of bomb threats, local media reported. By the afternoon, the facility along with others in Pennsylvania, New Jersey and Delaware had reopened.

Scores of other such threats have been received by Jewish community centers in recent weeks across the country.

“As a community, we must speak out to condemn inflammatory messages and actions that serve only to divide, stigmatize and incite prejudice,” Archbishop Chaput said. “We must continually and loudly reject attempts to alienate and persecute the members of any religious tradition.

“Rather, as members of diverse faith and ethnic communities throughout the region, we must stand up for one another and improve the quality of life for everyone by building bridges of trust and understanding.”

The heads of the Religious Leaders Council of Greater Philadelphia met the afternoon of Feb. 27 at the Lutheran Theological Seminary in Philadelphia to discuss the situation. Msgr. Daniel Kutys, moderator of the curia for the Philadelphia Archdiocese, represented Archbishop Chaput at the meeting.

The archbishop, who is a co-convener of the more than 30-member religious leadership council, was unable to attend the meeting.

In the neighboring Diocese of Camden, New Jersey, Bishop Dennis J. Sullivan called the desecration of the Pennsylvania cemetery “abhorrent behavior” that “has no place in contemporary culture (and) stands in opposition to everything the Catholic Church believes and teaches.”

Bishop Sullivan also noted that Jewish community centers in his diocese as well as in Pennsylvania and Delaware received bomb threats over the weekend and on Feb. 27, the day he issued his statement.

“As Catholics, we too are spiritual descendants of Abraham. We recognize that an attack or threat against our Jewish family members is an attack against all peoples of faith,” he said, adding that everyone in the Camden Diocese stands “in solidarity with our Jewish sisters and brothers against these hateful and anti-Semitic incidents.”

“We pray that the perpetrators of these incidents will come to know God’s love, bringing them to the light of peace where they may recant these acts of hate and join with all people of goodwill in forging a community of compassion,” Bishop Sullivan said.

In St. Louis, an interfaith cleanup effort of the vandalized cemetery took place Feb 22 followed by an interfaith prayer service. Vandals toppled more than two-dozen gravestones and damaged an estimated 200 more at the historic Chesed Shel Emeth Cemetery, which dates to 1893.

They were among about 1,000 people who helped with cleanup, including Vice President Mike Pence and Missouri Gov. Eric Greitans. When he came unannounced to help rake leaves, Pence was wearing work clothes, as he had come from another event.

“There is no place in America for hatred, prejudice, or acts of violence or anti-Semitism,” he said later. “I must tell you that the people of Missouri are inspiring the nation by your love and care for this place and the Jewish community. I want to thank you for that inspiration. For showing the world what America is all about.”

Greitens, who came ready to work in jeans, boots and a work shirt, described the vandalism as “a despicable act … anti-Semitic and painful. Moments like this are what a community is about. … We’re going to demonstrate that this is a moment of revolve. We’re coming together to share service.”

Seminarians were among those who answered St. Louis Archbishop Robert J. Carlson’s call Feb. 21 “to help our Jewish brothers and sisters.” About a dozen used their afternoon free time to help out.

“This is neat to see,” said seminarian Cole Bestgen, watching the workers fan out on a sunny and unseasonably warm 67-degree day armed with rakes, trash barrels and buckets. Though toppled headstones already had been replaced, the volunteers took care of general cleanup and maintenance.

The desecration sparked outrage from numerous ecumenical groups — Jewish, Catholic, Christian, Muslims and more — and dignitaries across the country, including President Donald J. Trump, who sent messages of thanks through Pence and Greitens.

Gambino is director and general manager of CatholicPhilly.com, the news website of the Archdiocese of Philadelphia. Contributing to this story was Dave Luecking in St. Louis.