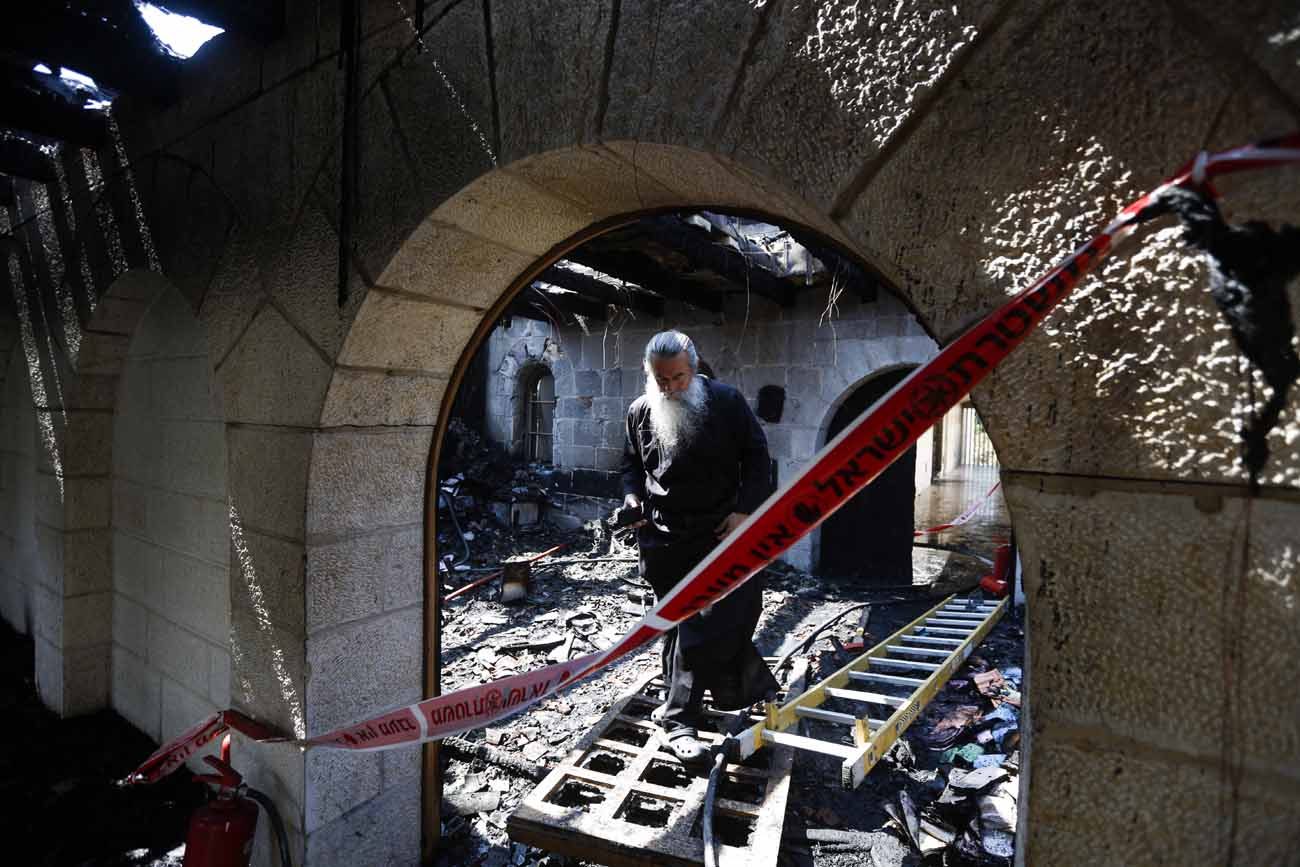 A clergyman walks through the rubble of the Church of Loaves and Fishes following a 2015 fire in Tabgha, Israel. Twenty months after the arson attack, the atrium of the Benedictine church was reopened. (CNS photo/Atef Safadi, EPA)

JERUSALEM (CNS) — Twenty months after having suffered serious damage from an arson attack, the atrium of the Benedictine Church of the Loaves and Fishes was reopened Feb. 12. German Cardinal Rainer Woelki of Cologne, president of the German Association of the Holy Land, celebrating a Mass to mark the event.

Israeli President Reuven Rivlin, who visited the church in Tabgha immediately following the attack in June 2015, was also among the official guests after the Mass.

“We are bound together. We are all equal before God, and equal before the law,” Rivlin said. “The state of Israel is … deeply committed to the freedom of religion and of worship for all religions and believers. We stand up for religious freedom because, as a people, we know very well what it means to suffer religious persecution. And we stand up for religious freedom because we are a democratic state.

“The last time I was here, we stood together and looked at the burned walls and the terrible graffiti,” the president said. “Today, I visit here again, and see the renewal of this historic, special, and holy place. I want to thank all the people who worked hard to restore this place, and to say clearly; that hate cannot win.”

“Today is a time of great joy and friendship,” said Cardinal Woelki. “It was very warming to hear from the local people how, after the arson attack, so many people across many religions in the Holy Land came to show their solidarity.” 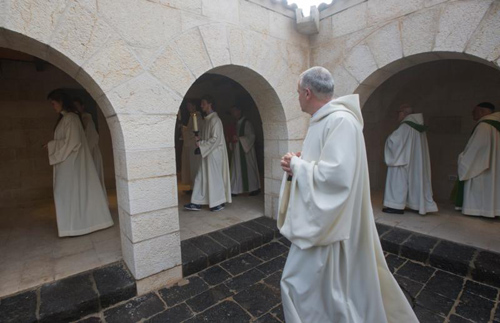 Monks process into the Church of Loaves and Fishes for Mass Feb. 12 in Tabgha, Israel. Twenty months after having suffered serious damage from an arson attack, the atrium of the Benedictine church was reopened. (CNS photo/Atef Safadi, EPA)

Noting the importance of preventing such attacks in the future, the guests spoke of the need to create connections among people of different faiths and to learn about one another.

Two suspects have been held under administrative detention since July 2015 for involvement in the arson, which police are treating as a hate crime.

Also known as the Church of the Multiplication, the church located on the shore of the Sea of Galilee is traditionally believed to be the site of Jesus’ miracle of the fish and loaves, where he was able to feed a multitude of people with only five loaves of bread and two fish.

Although the Israeli government had made promises of funding to help restore the structure, the actual amount received for the restoration following yearlong negotiations was less than had been initially stated, according to Heinz Thiel, secretary-general of the German Association of the Holy Land. Israel contributed $394,000 toward the reconstruction of the church.

Ultimately the work was completed through the help of private donations from both institutions and individuals, Thiel said.

The total cost of the reconstruction, including loss of earnings and goods from their gift shop and the new security measures that had to be installed, was $1.38 million, said Benedictine Father Basilius Schiel, prior of the Tabgha monastery.

NEXT: Struggle against the ‘culture of destruction,’ pope tells teens