Almsgiving: Give in a way ‘that is pleasing to God’ 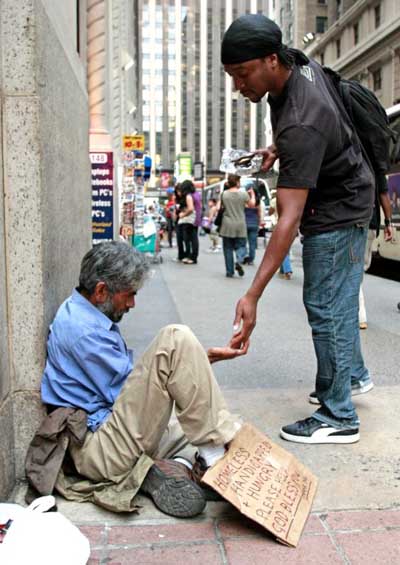 A passerby gives money to a homeless man sitting outside St. Francis of Assisi Church in New York City. Throughout Scripture, we find ample evidence of God calling us to give alms to the poor — a reminder that almsgiving extends even beyond Lent. (CNS photo/Gregory A. Shemitz)

“Giving alms to the poor is one of the chief witnesses to fraternal charity,” says the Catechism of the Catholic Church. “It is also a work of justice pleasing to God” (No. 2447).

Throughout Scripture, we find ample evidence of God calling us to give alms to the poor, beginning with the book of Leviticus (25:35): “When one of your kindred is reduced to poverty and becomes indebted to you, you shall support that person like a resident alien; let your kindred live with you.”

And who are our “kindred”?

“Whoever does the will of my heavenly Father is my brother, and sister, and mother,” declares Jesus (Mt 12:50).

Or, as the Book of Proverbs makes clear (19:17): “Whoever cares for the poor lends to the Lord, who will pay back the sum in full.”

None of this should be news to those of us who desire to follow Jesus. Of course, desiring and doing are not the same thing.

Recall the rich young man, who told Jesus he had kept and followed all of the commandments in hopes of attaining eternal life. But when Jesus further instructed him to “go, sell what you have and give to the poor,” so that he may have “treasure in heaven” (Mt 19:21), the young man decided, sadly, he couldn’t do it.

Contrast this with the woman who put “two small coins worth a few cents” into the treasury (Mk 12:41-44) — and Jesus’ ensuing admonition to his disciples:

“This poor widow put in more than all the other contributors to the treasury. For they have all contributed from their surplus wealth, but she, from her poverty, has contributed all she had, her whole livelihood.”

Few of us, in all honesty, can sell off “our whole livelihood” and give the proceeds to the poor. But we can certainly share what we have, as we learn from the Acts of the Apostles (2:44-45):

“All who believed were together and had all things in common; they would sell their property and possessions and divide them among all according to each one’s need.”

The catechism has a choice reminder for us as we consider what we can give:

In this Lenten season, when almsgiving is one of the three pillars we are invited to practice (along with prayer and fasting), we are, at the very least, called to be more mindful of the poor in our midst and to respond as generously as possible.

“Do not neglect to do good and to share what you have,” says the Letter to the Hebrews (13:16), since “God is pleased by sacrifices of that kind.”

For remember what God gave us: “God so loved the world that he gave his only Son, so that everyone who believes in him might not perish but might have eternal life” (Jn 3:16).

NEXT: New ways to give alms