New ways to give alms 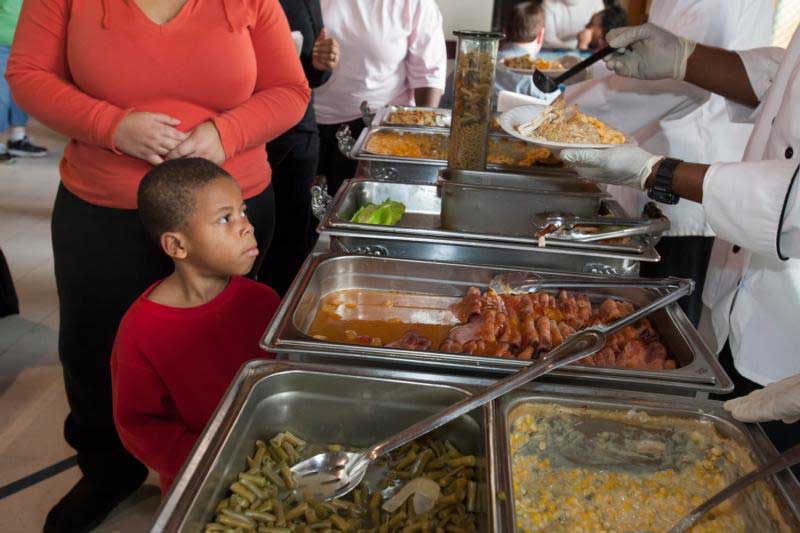 A boy looks on as meals are served to residents of a shelter for homeless women and children in Detroit. Almsgiving becomes a natural response to where prayer and fasting take us during Lent. (CNS photo/Jim West)

The word “almsgiving” has an old-fashioned ring to it. It calls to mind a Charles Dickens novel, a street urchin begging from the upper classes.

How many of us write a check to our local food bank and think of it as “giving alms”? It’s not really a 21st-century term.

Let’s get ready to change that during Lent. The church urges us to think of this word as one of the three pillars of Lent — prayer, fasting, almsgiving. An old English word, it has its roots in a Greek term meaning “mercy.”

And that’s a fine reason to embrace the word almsgiving.

How can we think of almsgiving in new ways during this penitential season? How can almsgiving bring about a change of heart, the conversion called for during Lent?

First, I find it’s important in my own Lenten journey to think of the three pillars as integral to each other. Prayer is vital to a good Lent. Fasting reminds me of my need for prayer and discipline.

Almsgiving becomes a natural response to where my prayer and fasting take me — a desire to serve Jesus through others, to give of myself and what I have.

How about combining fasting with almsgiving? One Lent, I recognized that I had developed an expensive taste for designer coffee. Why not calculate what those lattes or mochas were costing me, and “give up” that habit for Lent, designating a charity that would benefit from my sacrifice.

It’s almost embarrassing to write that paragraph, as I realize what a First World issue that is — poor me, no trips to the barista. Nevertheless, it produced results, not the least of which was eventually realizing I was indulging way too much in that pricey habit. And the money not spent went to a good cause.

Remember, the alms we give should come from sacrifice. They shouldn’t come from our excess, the leftover money in our bank account at the end of the month. And, like my realization about mochas, they should produce some self-awareness in us as we journey through Lent.

Try giving up shopping for Lent. I had a friend who gave up shopping for a year — only groceries and the unavoidable expenditures, like car repair, were allowed. As you give up shopping, let it become a source of prayer. Why do I “need” so much? Do I shop out of boredom? Will that trendy sweater make me whole?

Keep track of the shopping money you save and use it for alms.

That great dress on sale that you passed up might become a winter coat for a refugee. Be conscious of this during prayer. And keep a journal. Where did I sacrifice so that another might have what they truly need? This is almsgiving.

Or commit to grocery shopping more economically. Do I splurge for crab legs this Friday, or will a tuna casserole work just fine? With the money saved, fill part of your cart with items for a food pantry. That tuna casserole choice becomes not just food for me but for another, as well as food for prayer and reflection.

At least once or twice during Lent, make the “alms” you distribute your own time and talent. Call the food pantry, tell them you have some donations and ask if they have any job they need help with on a Lenten Saturday.

One of the most eye-opening volunteer efforts I ever did was assisting clients at a food pantry. I became aware of the struggles I’d only heard about. It embarrassed me when the shelves held limited items, yet it amazed me when people would weep in gratitude for small assistance.

So, almsgiving can change our hearts. It should be sacrificial, should be tied to prayer and fasting, should help us reflect on our own journey, and should truly help others. Almsgiving can help us grow in mercy and justice this Lent.

PREVIOUS: Almsgiving: Give in a way ‘that is pleasing to God’

NEXT: Our responsibility to charity requires a self-sacrifice