In city and country, deportation worries on the rise 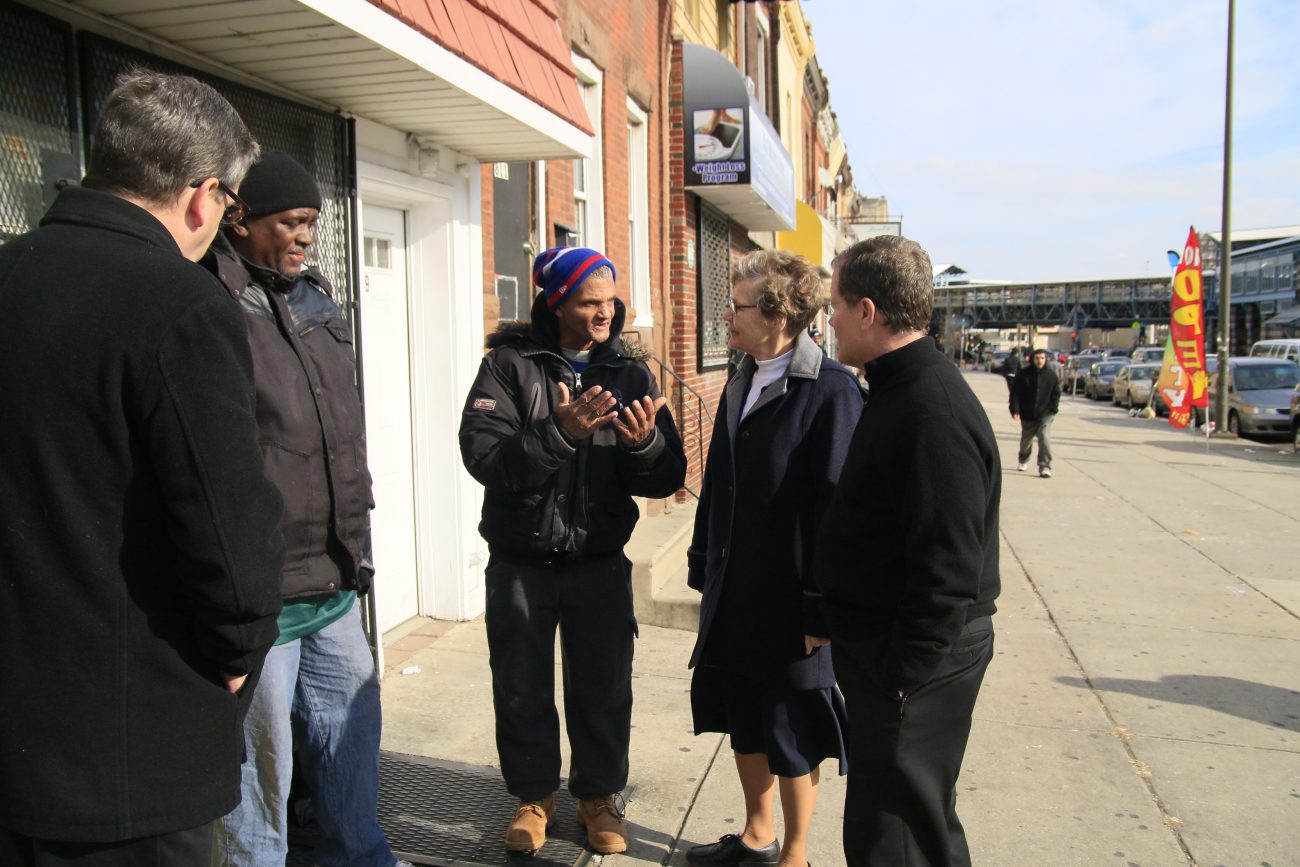 Residents of the Kensington section of Philadelphia talk with priests and a religious sister ministering at Mother of Mercy House, a Catholic outreach project in a neighborhood with many poor people including immigrants. (Sarah Webb)

When a child is baptized in the Catholic Church, one expects the parents will choose practicing Catholic godparents. At Visitation B.V.M. Parish in the Kensington section of Philadelphia, Redemptorist Father John Olenick has noticed a new priority.

“I have had parents asking for godparents who are American citizens so that if they get deported the children can stay with them,” he said. “There is a lot of anxiety.”

“We have some among our lectors, our eucharistic ministers and on our parish council,” Father Olenick said. “Their kids are in our school.”

U.S. Immigration and Customs Enforcement (ICE) has been active in the area and several people have been picked up, according to Father Olenick.

“Very recently they tried to arrest a Mexican man. The only reason he wasn’t picked up is because the neighbors came out and told them they had the wrong man and they started to film it. They had a name but it wasn’t him,” Father Olenick said.

The fears he detects from parishioners are not unfounded. According to information released Tuesday, March 14 from ICE, 248 people were arrested by ICE agents in Pennsylvania, Delaware and West Virginia between Feb. 27 and March 10. The agency did not break down by county or city where the arrests took place.

The arrests targeted “criminal aliens, immigration fugitives, re-entrants and other immigration violators,” according to the agency’s website, although it acknowledged such operations “may result in arrests of individuals other than those initially targeted.”

ICE “does not conduct sweeps, checkpoints or raids that target aliens indiscriminately.”

ICE agents targeted “public safety threats, such as convicted criminal aliens and gang members, and individuals who have violated our nation’s immigration laws. Those not being criminally prosecuted will be processed for removal from the United States,” the agency said.

It said the crackdown was carried out by “established fugitive operations teams,” adding ICE “does not conduct sweeps, checkpoints or raids that target aliens indiscriminately.”

Nevertheless, immigrants in the Kensington area are on edge.

Visitation’s surrounding neighborhood is very old and very poor; the residents are renters, not owners. Yet they are hardworking people trying to make a good life for their families and most do make a reasonable wage, Father Olenick believes.

But “there are stories of some working under the table being generally exploited,” he said. “A bad boss will take advantage of them.”

Father Olenick suggests what is really needed is just immigration reform, which would be good not only for immigrants but for the whole community.

Fears of family break up in booming Chester County

Rural Avondale in Chester County is miles away from Kensington both physically and culturally. It is home to mega-parish St. Rocco, the Philadelphia Archdiocese’s officially designated Hispanic parish.

It has 3,613 families with 14,769 individuals, average weekly Mass attendance of 2,400 faithful, 508 baptisms last year and 1,500 kids in its PREP programs. Of the seven weekend Masses, six are in Spanish and one is bilingual, Spanish-English.

It all started 27 years ago with a handful of families employed by the area mushroom farms. Msgr. Francis Depman had 10 kids in CCD whom he would bus from local schools. Now he has eight buses and still drives one himself.

“Many are concerned that the family will be broken up. A lot of the children were born here and it would be hard for them to go back to Mexico to finish their education.”

He estimates 75 percent of his flock, not counting children, are foreign born. Many did not come with a proper visa, and at this point they are scared.

“They may have papers and a relative does not; maybe the wife is a citizen and the husband isn’t,” he said. “Many are concerned that the family will be broken up. A lot of the children were born here and it would be hard for them to go back to Mexico to finish their education.”

When Msgr. Depman first arrived in the area, the few Mexican families lived in modest buildings near the mushroom houses that were then and are now a main industry in the area.

Today many of the early arrivals own their own home, have cars and have sent their kids to college. They are thoroughly integrated and accepted in the community and at least 12 now own mushroom houses.

“As a county we are blessed and the people are well received here because they are so much a part of the economy,” Msgr. Depman said. “All of the farms here are looking for workers.”

One of the biggest factors keeping immigrants still coming by whatever means they can is they see how well those who came earlier are doing, Msgr. Depman suggests.

A rising perception of deportation raids, even at church

While no one knows what is going to happen with immigration policy under the administration of President Donald Trump, at this time the whole community is on edge, and this especially affects the children, who worry what will happen to their parents.

There has always been some enforcement of immigration rules, and Msgr. Depman does not believe it has increased, at least not yet, but there is a perception it has.

“A couple weeks ago there was talk about raids at Wawa, at Walmart and at St. Rocco’s but it was not true. People are on edge and think if they just walk down the street immigration is going to stop and grab them.”

“Any place the police go, the people think it is immigration,” he said. “A couple weeks ago there was talk about raids at Wawa, at Walmart and at St. Rocco’s but it was not true. People are on edge and think if they just walk down the street immigration is going to stop and grab them.”

“We ourselves don’t know what is going on and I encourage people to stand by each other and let each other know they are not alone. They can count on the support (of the parish),” he said.

Msgr. Depman himself spends many hours helping people facing possible deportation through petitions and paper work to the proper officials.

The solution isn’t easy, but “we have to come up with a better system where people can be treated with dignity,” Msgr. Depman said. “The vast majority are productive people, they are not criminals. They contribute to the economy in a very good way and pay taxes.”

A Lenten call to discipleship on the streets

Peter Pedemonti, who cut his teeth with the Catholic Worker Movement, is a member of Visitation Parish in Philadelphia and the director of the New Sanctuary Movement, a prophetic group that has been actively fighting for immigrant rights for 10 years. It now includes members from 22 local religious congregations, including six Catholic parishes.

He has seen seven ICE raids in Philadelphia in the past month, which may not be more than typical during the Obama administration. But the worrisome thing for Pedemonti is the Trump administration’s call for 10,000 more ICE agents.

The New Sanctuary Movement believes people should stand up and fight what is happening, and toward this end a program called “Sanctuary in the Streets” has been implemented with 1,300 people registered, of which 500 are trained to identify a raid and immediately respond, Pedemonti said.

“If we want to follow our teaching on what God wants, we have to change our policy.”

“They go to the house, surround it and the ICE vehicle and hold an interfaith service with singing and prayer,” he said.

In his view such an action probably will not stop ICE from arresting their target, but it does show the family that people of faith are with them and it sheds light on what the government is doing.

“As Catholics and people of faith we can’t let this happen especially during Lent,” Pedemonti said. “It is an invitation to discern what discipleship means.”

In answer to the question, how many immigrants should America allow to enter, Pedemonti simply refers to the Gospel of Matthew (25:31-45): “I was … a stranger and you welcomed me.”

“It does not limit numbers,” he said. “If we want to follow our teaching on what God wants, we have to change our policy.”

President’s comments in a climate of anxiety

Although Matt Davis, director of the archdiocesan Office for Migrants and Refugees, has not encountered direct instance of recent deportations, he has heard several people were picked up from Bishop Edward Deliman’s parish, St. Charles Borromeo in Bensalem.

“I don’t know if there are more deportations than previously but there is much more fear,” he said.

He cites the example of an invitation tendered to a member of the Haitian Catholic community in Brooklyn to attend a Philadelphia prayer service. It was turned down after some people of unknown origin were said to have been arrested there, and the Haitian Catholics in Brooklyn warned those in Philadelphia to be wary of attending a church service for immigrants because ICE may be waiting outside to arrest people.

“The great majority of people are good. You can’t just say Mexicans are rapists and Muslims are terrorists, it just isn’t true.”

“It may just be word of mouth,” Davis suggested.

He lays the blame for this climate of anxiety squarely on President Trump for remarks he has made about Mexicans and other groups. “Whatever he says gets picked up, especially by the Spanish language news,” he said. “People are overloaded with negative news and I think President Trump ought to be more careful in the language of his comments. He has a responsibility for that.”

As for just who the United States should admit, Davis said the Catholic bishops of the country “are right — we should make a way for people who are skilled, unskilled and people in the shadows. The great majority of people are good. You can’t just say Mexicans are rapists and Muslims are terrorists, it just isn’t true.

“Immigration is complex and we need to debate it, but it has to be thoughtful debate, not based on prejudice.” 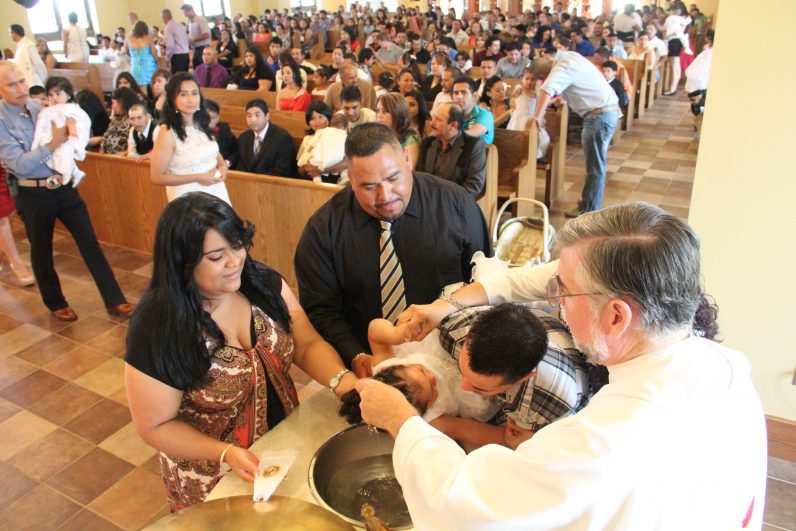 Msgr. Francis Depman (bottom) pastor of St. Rocco Parish in Avondale, baptizes a child in the southern Chester County church. The Hispanic national parish is booming, with its 508 baptisms last year only one indicator. Most of the parishioners are recent immigrants, many of whom are without legal documentation. (Sarah Webb)

NEXT: People with addictions, and loved ones, draw strength from faith