Local teacher lauded for work on long-term rebuild in Haiti 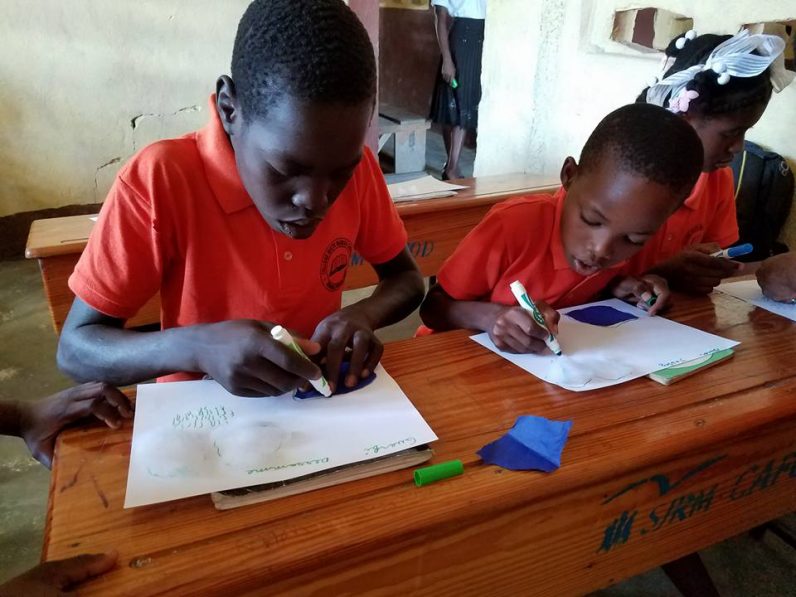 Children learn at their school with the support of Anne Hoppenot’s KONEKTE non-profit organization.

As part of the celebration of the Feast Day of St. Katharine Drexel, who died March 3, 1955 and was canonized in 2000, the Sisters of the Blessed Sacrament, the congregation she founded, sponsored a public Mass on March 5.

It was celebrated by Bishop Edward Deliman at their motherhouse, St. Elizabeth’s Convent in Bensalem, where Mother Katharine lived and labored for the last 62 years of her life and where she is now entombed.

As part of the celebration, the Sisters of the Blessed Sacrament bestowed their St. Katharine Drexel National Justice Award in a short ceremony after the Mass. The award is given annually to someone who exemplifies the ideals of St. Katharine.

This year’s awardee, Anne Hoppenot, a professor of French at the Stuart Country Day School of the Sacred Heart in Princeton, N.J., was honored for her work to empower young people in Haiti, a country where St. Katharine gave generous assistance in her own lifetime.

Hoppenot is the principal co-founder of KONEKTE Princeton Haiti, an outreach program initiated in the wake of the disastrous earthquake in Haiti in 2010. (Read more about the effort on the KONEKTE Facebook page.)

“The mission is in keeping with the charism and philosophy of St. Katharine Drexel,” said Sister Donna Breslin, president of the Blessed Sacrament Sisters. “Through her schools for Black and Native Americans she empowered young students to become leaders in their community. I know Mother Katharine Drexel is probably clapping today and saying her famous words when she was extremely happy, ‘Holy Angels.’”

As Hoppenot explained, KONEKTE means “Connect” in French Creole, the everyday language of Haiti where the language taught in schools is French, harking back to the 18th and early 19th century when Haiti was a French colony.

This is appropriate for Hoppenot who is a native of France, as is her husband Herve and the eldest three of their four grown children. They are now naturalized citizens of the United States.

Originally a certified public accountant by profession, she traveled the world as an internal auditor for the cosmetic firm L’Oréal before leaving so she could spend more time raising her children.

“I started KONEKTE immediately after the earthquake,” she said. “Back then many of the people were living in tents but are not now. Our organization is trying to build long-term partnerships to bring educational progress to Haiti, helping schools, building a new society.”

A long-term problem in Haiti has been a lack of opportunity, which means many young people leave to start a new life elsewhere, Hoppenot said.

There is progress being made, she believes, and it is noticeable with new roads, increased tourism and a new government administration.

Although many groups went to Haiti to assist after the 2010 earthquake but soon left, Hoppenot is determined that KONEKTE is one that will remain.

“It took a few years for the people to trust us, since so many other non-profits came in after the earthquake but left after a short time,” she said. “Now they realize we are not going to leave.”

Because their group is relatively small she partners with another larger organization “Foundations for Peace,” which builds schools and conducts after-school programs.

Other major initiatives include a teacher-training program for the long haul as well as a group of interested adults and Sacred Heart students who assist as they can while learning more about KONEKTE’s mission.

“I’m a teacher and for me education is most important,” Hoppenot said. “I met a poor farmer from Haiti at a conference and I was inspired. If I could share some of my experience and training as a teacher I would be very happy.”

Although this was the ninth presentation of the St. Katharine Drexel Justice Award, it is uncertain what form and where future awards will be presented.

As previously reported, the Sisters of the Blessed Sacrament, facing declining numbers along with many religious congregations, will close St. Elizabeth Convent at the end of this year. But whatever happens the spirit of Mother Katharine Drexel will live on, wherever and however.

PREVIOUS: Come to the cathedral this Sunday to pray for immigrants