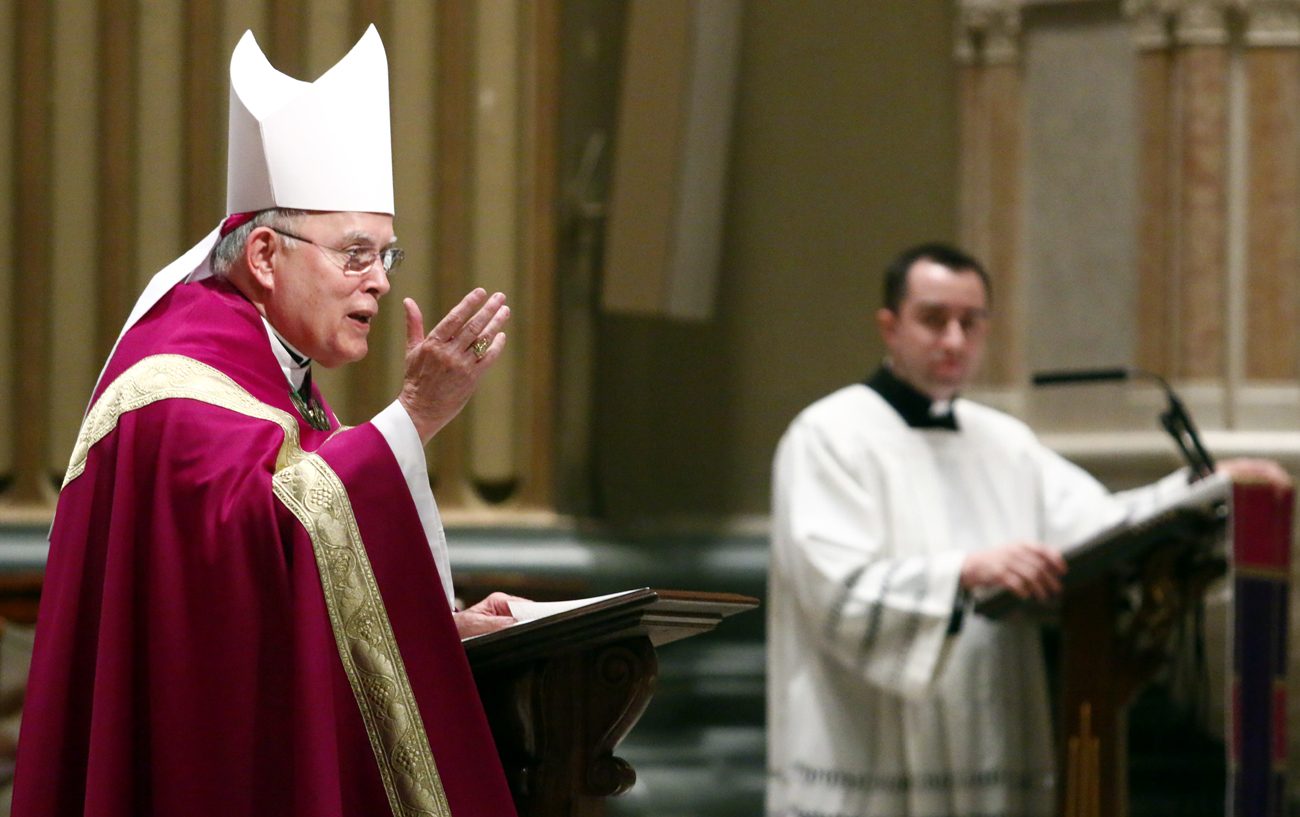 As Archbishop Charles Chaput preaches during the liturgy for immigrants and refugees March 19 at the Cathedral Basilica of SS. Peter and Paul, Father Thomas Viviano translates the homily for Spanish-speaking participants. (Sarah Webb) 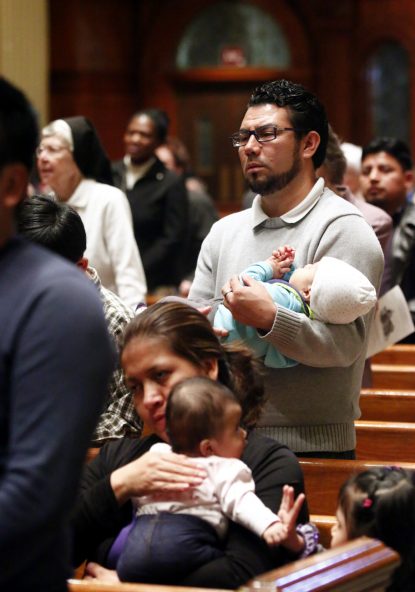 Karol Diaz, in fifth grade at Assumption B.V.M. School in West Grove, was among the youngest of those attending the Liturgy of the Word for justice for immigrants and refugees led by Archbishop Charles Chaput at the Cathedral Basilica of SS. Peter and Paul on Sunday, March 19.

(Read the full text of the archbishop’s homily here, see a photo gallery of the prayer service here, and listen to the recorded homily here. Watch the video below.)

In very few words, Diaz got to the heart of the matter.

“I’m here for my parents. They are immigrants and they don’t have papers,” he said.

This too was addressed by Archbishop Chaput in his homily when he spoke of the fear and anxiety in the immigrant community.

“Parents are afraid of being separated from one another and their children,” he said. “Children are afraid that when they come home from school their parents will be gone.”

The purpose of the liturgy, the archbishop said, was to gather as a church to pray and reflect on the immigration issue that is a source of great division and polarization in the United States today.

“Since we are Christians we have a serious obligation, a vocation, to be concerned about justice, charity and mercy,” he said.

He acknowledged there are good people on both sides of the issue and “as followers of Jesus Christ we need to resist the temptation to demonize those with whom we disagree,” he said.

The archbishop made very clear on which side the Catholic Church and the American Catholic bishops stand.

“We believe that good government should welcome foreigners out of charity and respect for the human person,” he said in his homily. With the help of Father Thomas Viviano, it was simultaneously translated into Spanish, the language of many of the approximately 200 people who were in attendance.

“We believe that people have a right to immigrate when they need to find work and ways of making the lives of their families better,” he told the congregation. “This is a matter of basic human rights.”

Justice for Immigrants and Refugees from Kearns Media Consulting LLC on Vimeo.

At the same time, the bishops believe “a country has a right to an ordered immigration process,” he said, adding “enforcement of the laws of our country (is) important.”

Immigrants who are guilty of such crimes as smuggling, drug trafficking and human trafficking should be deported, Archbishop Chaput acknowledged, but when it comes to enforcement of immigration laws the family should be respected above all.

“We can’t separate families from one another or parents from their children. Enforcement should be humane and proportional,” he said.

At the beginning of his homily Archbishop Chaput quoted from the Office of Readings for the day from the Book of Exodus, which for the occasion was spot on: “You shall not molest or oppress an alien for you were once aliens yourself in the Land of Egypt.”

As a matter of fact, many of those attending the service were not immigrants or aliens but descended from forebears who were.

“My parents came from Germany, from Bavaria,” said Trinitarian Sister Bernadine Schmalhoffer, who attended in solidarity with the immigrants. “It was rough and they had to struggle to make a living, and I’m sure these poor people will make it.”

Father John Newns brought a busload of about 25 of his parishioners from St. Ann Parish in Phoenixville, and most were indeed immigrants although the little children were born here. “Many of our people are from Mexico and Guatemala,” he said.

Whatever their place of birth, they appreciated the service. “Everything was wonderful,” said Angel Julian, who attended with the St. Ann group. “I’m American but many people here are not. But as the archbishop said, we are all brothers and sisters, we are all the same.” 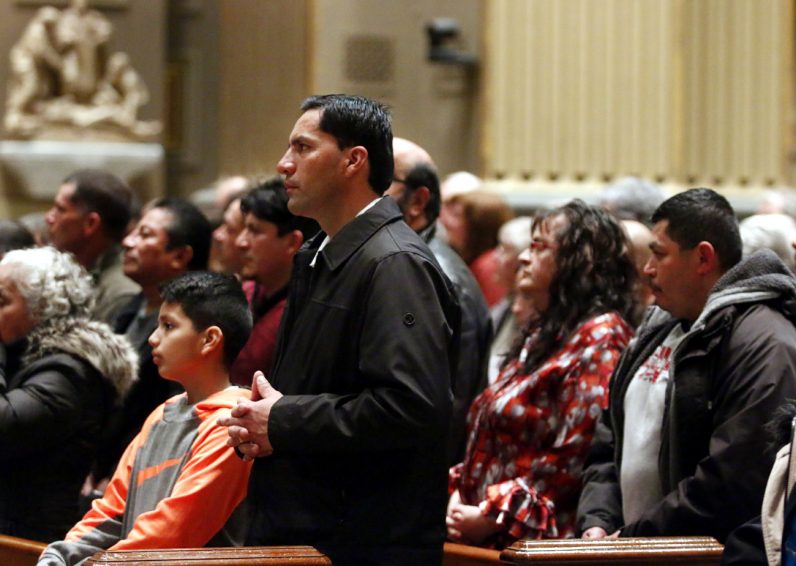 Juan Diaz and his son Karol from St. Rocco Parish, Avondale, pray at the prayer service for immigration. (Sarah Webb)

NEXT: Helping Hands at St. Monica’s get to work feeding the world