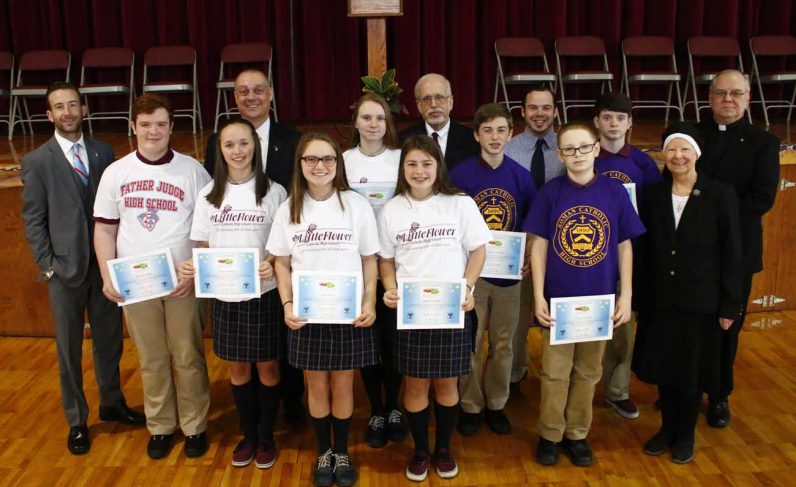 Students of Our Lady of Port Richmond School, Philadelphia, show their $2,000 Matching Starter Scholarships along with representatives from the partnering high schools and OLPR officials. (Photo by Sarah Webb)

When a group of eighth graders at Our Lady of Port Richmond Regional Catholic School, Philadelphia, graduates this spring, their families will get some help for tuition under a first-ever matching scholarship program with archdiocesan high schools.

Each of the high schools will match the $2,000 scholarship for the freshman year and may extended it in succeeding years.

The program represents a boon to the students’ parents in the Port Richmond area as the scholarships provide a minimum of $58,000 in tuition aid in the first year alone.

“We are truly blessed to be able to offer this one-of-a-kind scholarship program here at Our Lady of Port Richmond,” said Sister Mary Ripp, S.C.C., school principal. “Our ability to do this is made possible by the tireless work of our Home and School Association, alumni, faculty and staff, as well as the sacrifices of our families and the dedication of our students.”

The Matching Starter Scholarship program was launched at OLPR School in October 2016 and has been budgeted for $80,000 through 2020.

The addition of the scholarship will help eight students continuing their Catholic education at an archdiocesan high school “reach the limits of their God-given potential by continuing our mission beyond their time at OLPR,” said Sister Mary.

The new matching scholarship was the brainchild of business manager Richard Schellinger, who explained that the three parishes partnering with the regional school subsidize it in the amount of $10,000 to $15,000 a year.

The subsidy in addition to tuition payments would not be enough to keep the school running, so it relies on extensive fundraising in the community to support the school, totaling some $125,000 a year and enabling the matching scholarship.

“Our families are very faithful in paying their tuition on time,” he said.

While the participation of the three high schools to provide matching funds is important, the fundraising efforts of parents and alumni in the community are the key to the program’s success.

Schellinger and parents acknowledged that a big part of the Our Lady of Port Richmond’s success and the community fundraising effort is the principal, Sister Mary, whom he called “the wind behind the sails.”

Secretary for Catholic Education Chris Mominey acknowledged her leadership as well, and praised the collaboration with the parish pastors including Father Dennis Fedak, pastor of Nativity B.V.M. Parish.

He thanked the parishioners “for the sacrifices they make to send their children here to form them as young Christian men and women,” he said.

Our Lady of Port Richmond, which enrolls 420 students taught by 27 faculty members, has been a Catholic education success story since the regional school was formed from four parish grade schools in 2008.

Bob DeNight, whose daughter Alayna received a matching scholarship, said the school is “a testament to what Sister Mary and her administrative team have built here.”

“It’s not about any individual aspect, it’s a partnership, it’s all aspects,” he said. “We like to believe we’re trying to prepare well-rounded individuals not only for high school but for college and for life.”

His wife Pat DeNight knows all about the hard work that goes into fundraising for the school. She is on the OLPR’s Home and School Association which runs fundraisers all year long.

Her example of volunteer service has not gone unnoticed. Daughter Alayna is the last of the family’s three children, after two sons, to go through OLPR, and in addition to her math classes and playing soccer, she enjoys taking part in service projects.

“I help around the school (including) for setting up for the family auction,” Alayna said. “Earlier in the year I went to Jefferson Hospital for a bake sale.”

NEXT: Catholics in archdiocese raise their prayers in 24 Hours for the Lord