Deacon Paul Hagerty dies at 87, was banker, professor and golfer 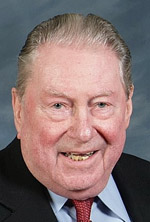 Born and raised in Germantown, Philadelphia, he served in the U.S. Navy during the Korean War, after which he attended Drexel University graduating with a degree in investment banking, a field in which he worked for the next 50 years.

He also taught on the graduate level at Drexel for 20 years and was an officer in several financial associations, as well as an avid golfer.

He and his wife Margaret, who died in 2004, were the parents of five children.

An active member of Immaculate Conception Parish, he entered the permanent diaconate program and was ordained at the Cathedral Basilica of SS. Peter and Paul by Bishop Joseph F. Martino on June 1, 1997. He was assigned to Immaculate Conception and although he officially retired in 2011, he continued to serve until 2015.

“In many ways he influenced me,” said Permanent Deacon Charles (Chuck) Lewis, his son-in-law. “He was a perfect role model on how to be a gentleman. I think he set a standard for giving back. From a faith perspective he lived his faith and was comfortable in his own skin. Both he and my mother-in-law were role models for service.”

There will be a viewing for Deacon Hagerty at Immaculate Conception Church on Thursday, March 23 from 6 to 9 p.m. A second viewing will be held at the church on Friday, March 24 at 9 a.m., followed by his 11 a.m. funeral Mass with Bishop Edward Deliman as the principal celebrant.

The homily will be preached by Deacon Lewis. Deacon Chaplains will be Deacon Alvin Clay and Deacon C. Stephen Vandercrone.