Rita Schiavone, founder of Aid For Friends, dies at 82 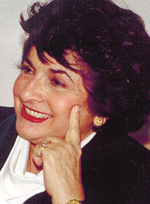 Rita Ungaro Schiavone, the founder of Philadelphia-based service organization Aid For Friends, died March 22. She was 82.

Over the last 43 years AFF has provided more than 15,500 individuals in the Philadelphia region with home-cooked meals prepared by volunteers, collected at mostly churches and synagogues, and taken by other volunteers weekly to the homes of the frail elderly and disabled home-bound men and women, providing not only nourishment but companionship.

Schiavone first encountered the needs of the frail elderly while doing volunteer social work with the Frankford YMCA. She originally started taking home-cooked meals prepared in her own kitchen but very quickly realized the need was far greater than she could fill by herself. She took the idea back to her parish, St. Jerome in Northeast Philadelphia, and through the Christian Family Movement at the parish and the YMCA, the ministry was born.

In essence the home visitors became surrogate family for many of the shut-ins. Her own family, starting with her husband, Michael, and her four sons, were her most avid supporters.

(Read a reflection of two Catholic leaders in anti-hunger work in the archdiocese who knew Rita Schiavone well.)

Her son Vincent shared some memories of his remarkable mother.

“While my dad supported the family as a dentist, Mom raised four boys and found time to dedicate her life to helping others. She chose to live her faith by working first with the Cardinal’s Commission on Human Relations 50 years ago and then founded Aid For Friends 43 years ago.

“Aid For Friends started very simply. One day Mom was doing social work in the Frankford area of Philadelphia when she met an old woman who was hungry and alone. This lady fell through the cracks, she had no family, no food, no friends and Mom was determined to do something about it.

“That night at dinner Mom took tin foil and made a tray on which she put a serving of food from our table for her new friend. Rita, as everyone knows Mom as, decided to share our dinners with her new friend every day until the day she died.

“Rita realized that there were many, many people who like her friend were hungry and alone so she asked her friends to help her and Aid For Friends was founded in our home.

“Mom was an amazing entrepreneur, a social entrepreneur before it was fashionable. She was smart, driven, tenacious, demanding and tireless. Rita was a force to be reckoned with, difficult at times, focused on her mission seven days a week.

“Rita, with Dad by her side, would speak at churches of every denomination, synagogues and service organizations that would allow her to. Pastors soon learned that it was easier to let Rita speak than say ‘no,’ because ‘no’ meant people would stay hungry and alone and that was not acceptable to Rita.

“When Rita spoke about Aid For Friends her ‘pitch’ was simple. She would tell the story of the forgotten and hungry person she met.”

During a recent interview, Rita said, “Since I was a child I knew God wanted me to serve in some way. God’s gift to me has been the joys of enhancing the lives of the needy frail elderly and disabled homebound. I thank God for the opportunity to do this.”

Msgr. John Jagodzinski was a friend of Mike and Rita all the way back to the beginnings of the ministry and has stayed on the board of Aid For Friends ever since.

“We stayed in touch,” he said. “She would have me pave the way for her to pastors before she called to ask if she could speak to obtain volunteers. She was a true apostle and it pained her to see people in need. When she spoke she would ask people when they were cooking to just make enough for another plate and put it in the freezer to bring in. The genius of the program is its simplicity.

“I remember when she spoke as Ascension Parish she asked for volunteers and 100 people signed up. She had a very simple message and it was beautiful to watch. I remember the four little boys helping; they grew up with good spiritual guidance.”

Rita had been ill for several years, and it was striking to Msgr. Jagodzinsi how devoted Mike was to her. In spite of her illness she attended the last board meeting in January, he recalls. Her work is still carried on with her son Steven as the executive director of Aid For Friends, and other family members are actively involved.

Msgr. Jagodzinsi, who said it was his privilege to give Rita the Eucharist shortly before she died, will be the principal celebrant and homilist at her funeral Mass. Among the concelebrants will be Bishop Louis A. DeSimone, who is first cousin to Michael Schiavone.