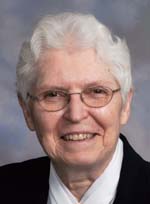 Sister Francis Bernard Butt, I.H.M., died Jan. 27 in Camilla Hall, Immaculata in the 58th year of her religious life. She was 76 years old.

Born in Portsmouth, Va., she entered the Congregation of the Sisters, Servants of the Immaculate Heart of Mary in 1959 from Holy Cross Parish, Lynchburg, Pa., and professed her vows in 1961.

Sister Francis served in the elementary and secondary schools in the Archdiocese of Philadelphia and the Dioceses of Allentown, Arlington and Richmond. She retired to Camilla Hall in 2012.

The funeral Mass was celebrated Jan. 31 at Camilla Hall. The celebrant and homilist was Father William E. Dean and the concelebrant was Msgr. Joseph Logrip.