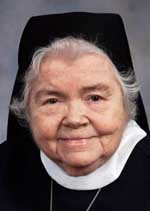 Sister Virgo Maria Werner, I.H.M., died Jan. 19 in Camilla Hall, Immaculata in the 68th year of her religious life. She was 86 years old.

Born in Wilmington, Del., Sister Virgo Maria entered the Congregation of the Sisters, Servants of the Immaculate Heart of Mary in 1949 from St. Athanasius Parish in Philadelphia and professed her vows in 1951.

She served in the elementary schools in the Archdiocese of Philadelphia for many years as well as in the Dioceses of Allentown and Richmond. In 1980, Sister Virgo Maria was assigned to the staff of Camilla Hall and served in various positions.

The funeral Mass was celebrated at Camilla Hall Jan. 24. The celebrant and homilist was Msgr. Joseph Logrip and the concelebrant was Father William E. Dean.

Sister Virgo Maria is survived by members of her religious community, her sister Barbara Yeagle (Dean), her sister-in-law Henrietta Werner (John) and many nieces, nephews, grandnieces and grandnephews. She was predeceased by her parents, John and Rose Milligan Werner and her brother John Werner.