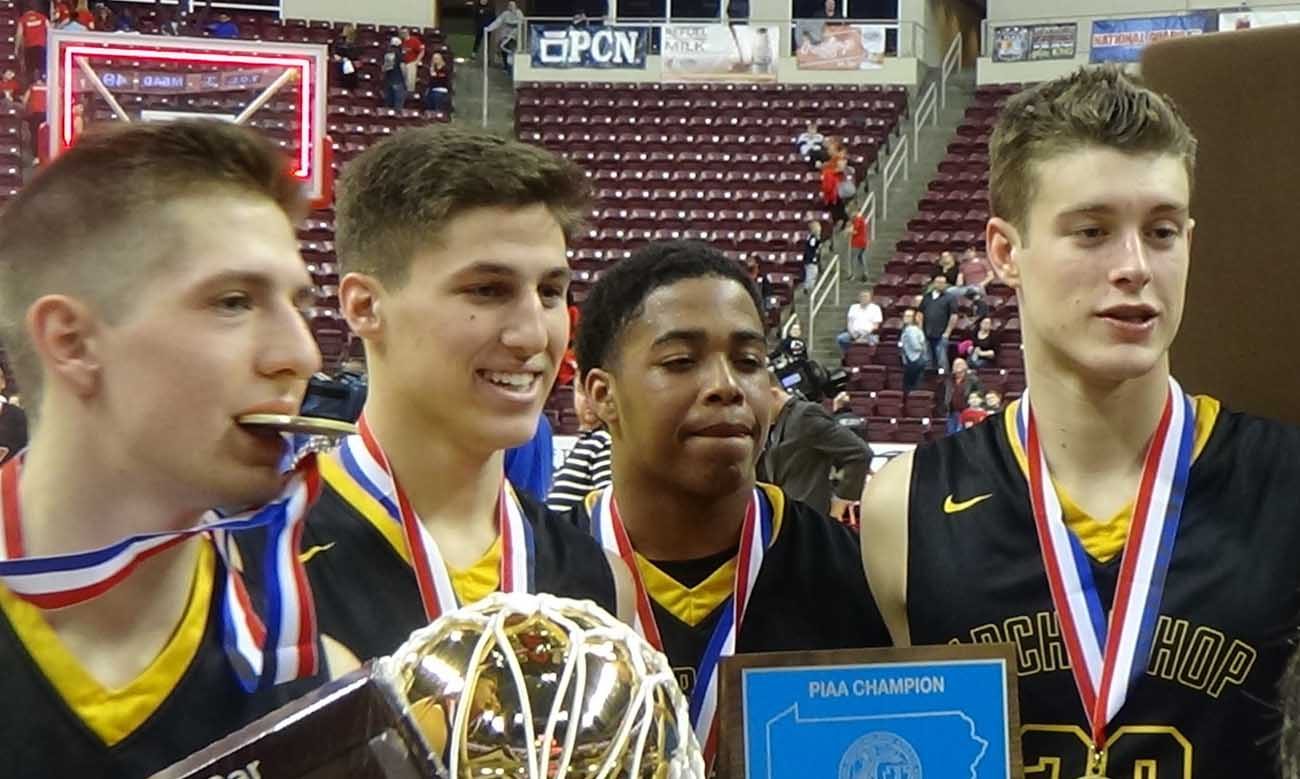 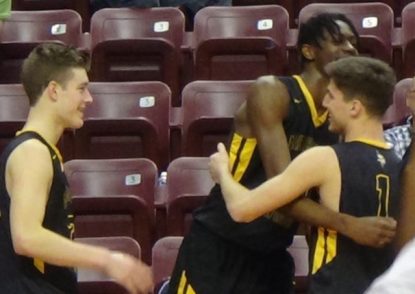 The last of the Archbishop Wood starters in the PIAA championship game, senior Collin Gillespie (right), comes off the court as he gets congratulations from Seth Pinkney near the end of the game. (John Knebels)

The New Year was anything but happy for Archbishop Wood’s basketball team. On Jan. 3, they dropped their Catholic League opener to Father Judge. Two days later, they lost their gym after a wall partially collapsed, rendering the venue too dangerous.

“The loss to Judge at home gave us a different perspective how the season could go,” said star senior Collin Gillespie. “I think it made us play with a chip on our shoulder the whole year.”

Fast forward to this past Friday night, March 24, at the Giant Center in Hershey, Pa.

For the 21st consecutive game since that 68-60 loss to Judge, the Vikings emerged victorious. With every player on the roster experiencing playing time, Wood rolled to a 73-40 win over District 10 champion Meadville and captured its first-ever PIAA Class 5A state championship.

Along the journey was the school’s first-ever boys’ Catholic League title, a riveting victory over Neumann-Goretti that required climbing back from a big deficit. The Vikings also seized the District 12 crown and finished with a 28-3 overall record, the best in school history.

Against Meadville, the Vikings dominated from the opening tip. They led, 17-5, after one quarter, and 40-21 at halftime. The 26-1 Meadville team appeared stunned.

“We came out on a mission,” said Wood forward Tyree Pickron. “It’s fun to play like that.”

Pickron, a junior who eclipsed the 1,000-point career scoring plateau in a 71-46 quarterfinal win over Spring Grove, chose the ideal time to lead his team in scoring. His 18 points included five three-pointers on nine tries.

“I’m still excited,” said Pickron. “Still jumping around, nervous as heck. It was a great game.”

With Gillespie (15 points, 10 rebounds), junior Seth Pinkney (11 points, 11 rebounds, four blocks), and junior Andrew Funk (10 points) providing most of the other offense, Wood coach John Mosco was presented a rare opportunity to provide minutes for each of the team’s 14 players on the roster.

“It was great,” said Pickron. “I hope they liked it. It’s something that we want them to get used to.”

“That team’s a good team,” said Cerruti. “I knew they would keep battling. We tried to stay focused and keep building our lead and get some other guys in the game to get this experience. We’ll remember this for the rest of our lives.”

At the midway point of the fourth quarter, Mosco took his starters out one by one. Each player embraced teammates and coaches on the bench while the seconds ticked away.

With 2:55 left in the 2016-17 basketball season, Gillespie was substituted for Funk, and the Wood faithful cheered. It was a fitting gesture by Mosco to wait to take out his star player last.

“I’m just excited right now,” said Gillespie, who finished his Wood career with 1,132 points. “We came out with the right mindset and finished.”

Gillespie credited several Wood graduates for establishing a winning expectation. Then he ended one of numerous interviews with a perfect summary.

“We became close friends and bonded like a family,” said Gillespie.

Hard to beat that.

John Knebels can be reached at jknebels@gmail.com or on twitter @johnknebels. 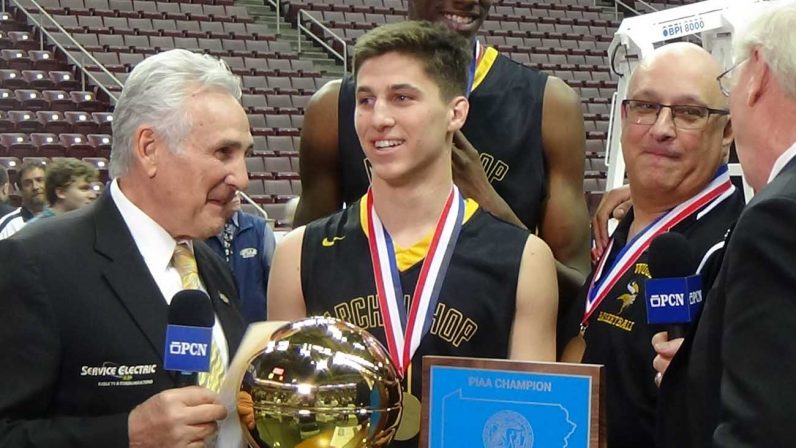 Collin Gillespie (center) wraps up one of many media interviews after the PIAA Class 5A championship victory March 24 in Hershey, Pa. Alongside Gillespie is Archbishop Wood coach John Mosco (right). (John Knebels)

NEXT: What a run: Wood’s girls cap four-year bonanza with 2nd state title