Fifty years after ‘Populorum Progressio,’ there’s still work to do 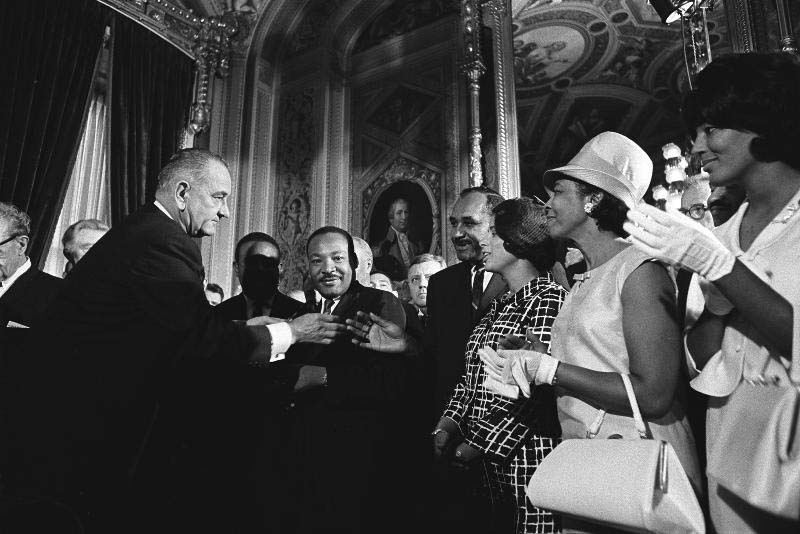 U.S. President Lyndon B. Johnson is pictured in this 1964 photo with a group of civil rights leaders who include the Rev. Martin Luther King Jr., Clarence Mitchell and Patricia Roberts Harris. As our nation saw the passage of the Civil Rights Act in 1964 and the emergence of the War on Poverty, the Catholic Church saw the advent of a landmark expression of its own social doctrine when Blessed Paul VI promulgated “Populorum Progressio,” “The Progress of Peoples,” in 1967. (CNS photo/Yoichi Okamoto, courtesy LBJ Library)

As our nation saw the passage of the Civil Rights Act in 1964 and the emergence of the War on Poverty, the Catholic Church saw the advent of a landmark expression of its own social doctrine when Blessed Paul VI promulgated “Populorum Progressio” (“The Progress of Peoples”) in 1967 as the first concrete application of the Second Vatican Council’s Pastoral Constitution on the Church in the Modern World (“Gaudium et Spes”).

The challenges that faced the world half a century ago still press upon us. We see contentious debate over the value of nationalism, the significance of borders, tensions between globalization and isolation, divisions between rich and poor, racial violence and uncertainty over the future of health care and social safety nets. So too has the church’s response to these issues endured.

“Populorum Progressio” has found contemporary expression in “Laudato Si’,” “Evangelii Gaudium” and was the central foundation for Pope Benedict XVI’s response to the global economic crisis of 2008 in “Caritas in Veritate.”

What Blessed Paul expressed is an understanding of the human person that is inherently relational, mutually responsible and developmental. Human activity and social policy should be rooted in our capacity to grow, and we should grow together and with God.

This process of integral human development considers not only economics, but a comprehensive understanding of human flourishing, including “the higher values of love and friendship, of prayer and contemplation.”

This development expresses the value of our activity as a means to seek the dignity to which we are called by God as “artisans of destiny.”

It is a perspective that neither upholds or condemns institutions or programs, but calls all human activity (economic, social, public, private, technological and cultural) to have its primary end as the well-being of the common good of all peoples, and even more so an eternal goal.

The whole only finds its purpose when engaged in promoting the good of the individual, and the individual when they are seeking to contribute to the whole. This is true at every level from within communities to between nations.

Blessed Paul recognized that his call for mutual solidarity, social justice and universal charity was directed toward a deeper brokenness within our own self-understanding:

“Human society is sorely ill. The cause is not so much the depletion of natural resources, nor their monopolistic control by a privileged few; it is rather the weakening of brotherly ties between individuals and nations.”

“Populorum Progressio” asserts that our attempts to solve the social challenges of our time — from mass migration to health care — will never be successful until we understand the relationality that defines our identity and value as more than something quantifiable.

Until solidarity, human flourishing and universal dignity in God become the benchmarks by which we direct human enterprise, no human ills will find their resolution.

In the wake of the fear, hatred, division and uncertainty that still plague our world 50 years later, the words of Blessed Paul may be more pertinent than ever.

Father Golden, a Nobertine priest, writes from New Mexico. He is the winner of the Catholic Campaign for Human Development’s 2016 Cardinal Bernardin New Leadership Award.

PREVIOUS: Social ills are caused by ‘weakening of brotherly ties,’ pope wrote in ’67

NEXT: ‘Progress of Peoples’ is as pertinent now as ever