Discovering real treasure in the crucifixion of Jesus 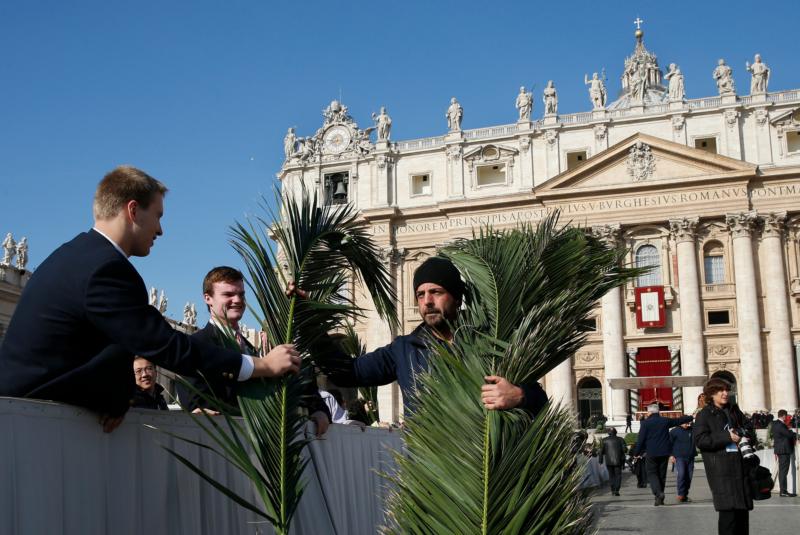 A worker hands out palm fronds before Pope Francis’ celebration of Palm Sunday Mass in St. Peter’s Square at the Vatican March 20, 2016. Palm Sunday produces an unsettling wave of emotions like no other day in the liturgical year — from unbridled joy at the arrival of the Messiah in Jerusalem, to unfathomable sorrow at his crucifixion on a cross. (CNS photo/Paul Haring)

Palm Sunday produces an unsettling wave of emotions like no other day in the liturgical year — from unbridled joy at the arrival of the Messiah in Jerusalem, to unfathomable sorrow at his crucifixion on a cross.

How do we make sense of it all as we head into Holy Week?

One of my most reliable sources of inspiration — as a husband, father and Catholic — is “People of the Passion,” a unique “meditation drama” written in 1985 by Catholic author/actress Mary Rose Betten.

In her story (suitable for stage performance or Scripture study), Betten explores the thoughts of nine people on the day of Jesus’ crucifixion — a few of them familiar (like Pilate’s wife and the bride at Cana), others created by the author’s fertile Catholic mind but entirely plausible.

The reflections of all nine characters are fascinating. But I have always been especially struck by the musings of a wealthy silversmith, a husband and father more intent on providing for his family materially than spiritually.

One day, encouraged (read: dragged) by his wife, he goes to hear “a Nazarene” with a reputation for healing the blind and lame. To his chagrin, the silversmith is captivated by the Nazarene’s words preached to thousands gathered on a hillside.

Captivation turns to astonishment when this preacher miraculously produces thousands of fish and hundreds of loaves, an action that so overwhelms his mute daughter that she bursts into song. “My daughter is singing!” gushes the happy silversmith.

But his and his wife’s joy are shattered when, upon returning home, they discover their house has been robbed of all the expensive wares that he had created.

“Revenge entered my heart, driving out gratitude and joy,” says the silversmith, “and in its place a wild rage to find the thief. I wanted to kill him; I wanted him to die for making me a poor man, left with nothing.”

The thief is eventually caught and sentenced to die, and on the day of his execution the silversmith, consumed with rage and vengeance, cheers wildly as the thief is carried by the Romans to Calvary. “Crucify him! Let the dog die!”

But in the midst of his rage, the silversmith discovers that to be crucified alongside this thief is “the rabbi who had given my daughter a voice.”

Stunned into silence, the silversmith is further amazed to hear the man who stole his silver ask the rabbi to save him — and to hear the rabbi tell him, “Today you will be with me in paradise.”

“I’m not sure what happened to my revenge,” says the silversmith. “I only know my daughter, my wife and I are disciples now.” The “good thief,” he reflects, “was indeed a good thief to rid my shop of idols.”

I can recall, more than 30 years ago, when I was encouraged by my wife to attend the Los Angeles Religious Education Congress at a time when I was more absorbed with my family’s financial welfare than its spiritual well-being. That event, to my chagrin, was a revelation — a wondrous, joyous experience that eventually brought me into the Catholic Church.

That same Catholic Church, over the years, has caused me moments of pain and sorrow, several of which have adversely impacted our family’s financial status.

And yet, that same church has brought me many more moments of joy, including the discovery of God-given talents that I likely would never have realized if not for the church and its people — led by my wife and son — who have loved and encouraged me at every step, especially in the face of sorrow.

Joy and sorrow. Like Betten’s silversmith, I realize that I cannot hold on to grief and anger, for my sake and the sake of my loved ones. I instead move forward, to find joy in living as Jesus’ disciple — and discover what “treasure” truly means.