A holiness that doesn’t make headlines

Lent’s one goal: Entering a relationship with Jesus 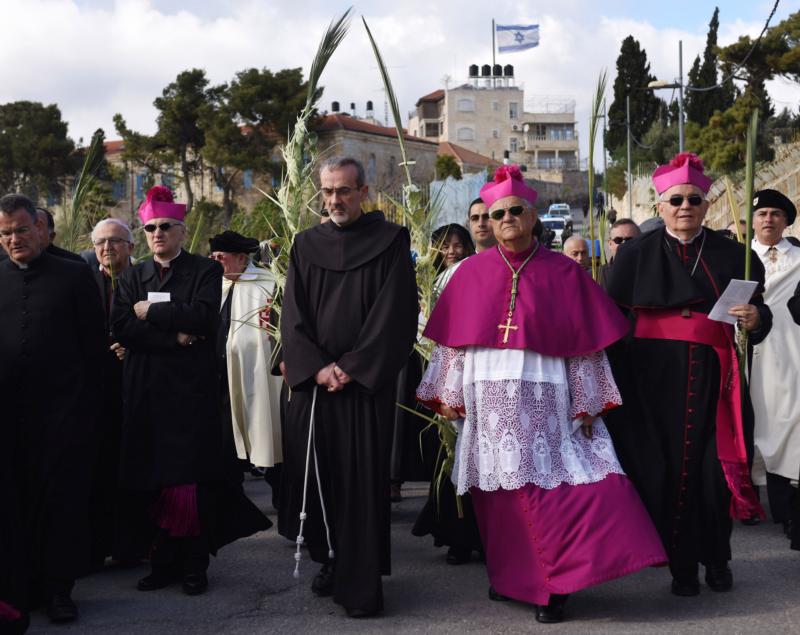 Now retired Latin Patriarch Fouad Twal of Jerusalem walks in the annual Palm Sunday procession on the Mount of Olives overlooking the Old City of Jerusalem March 20, 2016. The life and ministry of Jesus Christ was the fulfillment of centuries of prophecy, and when the Gospel was spread around the world, this point got great emphasis. (CNS photo/Debbie Hill)

It is a common adage by now that the Old Testament is fulfilled in the New Testament, and the New revealed in the Old. The life and ministry of Jesus Christ was the fulfillment of centuries of prophecy, and when the Gospel was spread around the world, this point got great emphasis.

We, as Catholics, see ourselves in continuity with the ancient Jewish people, and as a result we have a special interest in understanding how the prophecies of the Old Testament came to fulfillment in Jesus.

This year on Palm Sunday, we read the account from the Gospel of Matthew of the entrance of Jesus into Jerusalem. Scholars typically recognize Matthew’s as the Gospel with the greatest focus on the fulfillment of Old Testament prophecy, and this scene is no exception.

In Matthew’s recounting of the entrance into Jerusalem, Matthew specifically draws attention to a number of Old Testament prophecies being fulfilled in Jesus.

In the first verse of Matthew’s recounting of the entrance into Jerusalem, we hear that Jesus and the disciples were in Bethpage. Bethpage is one of the last villages on the road from Jericho to Jerusalem, and is located on the Mount of Olives.

The village is significant in the context of Old Testament prophecy, as Zechariah prophesied that this would be where God’s kingship over the entire world would ultimately be revealed (Zec. 14:4-9). This is especially important to remember in light of the great kingship prophecies that would be fulfilled as Jesus continued into the city of Jerusalem.

There is one brief passage, in particular, that contains some of the most profound symbolism and prophecy fulfillment in the whole of this scene: Jesus riding a colt on which no one has ever sat.

In the Old Testament, it is often specified that an animal meant for a sacred purpose must not have been put to any ordinary use before. This stipulation can be found in Numbers 19:2, Deuteronomy 21:3 and 1 Samuel 6:7.

Pope Benedict XVI, in his marvelous book, “Jesus of Nazareth: Holy Week: From the Entrance into Jerusalem to the Resurrection,” says that this may seem harmless to today’s reader, “but for the Jewish contemporaries of Jesus it is full of mysterious allusions.”

Even the fact that Jesus requested a mode of transport, by sending two disciples to acquire the colt because “the master has need of it,” is Jesus claiming the right of kings. This also brings to mind Genesis 49:10-11, in which Judah is promised the scepter, the ruler’s staff.

In this passage, it is said that Judah binds his donkey to the vine. “The tethered donkey, then,” says Pope Benedict, “indicates the one who is to come, ‘to (whom) shall be the obedience of the peoples.'” Here again, Jesus is claiming for himself the rights proper to kingship, which would not have been missed by his contemporary Jews.

Matthew explicitly quotes Zechariah 9:9: “Exult greatly, O daughter Zion! Shout for joy, O daughter Jerusalem! Behold: Your king is coming to you, a just savior is he, humble, and riding on a donkey, on a colt, the foal of a donkey” (see Mt 21:5). Jesus is displaying kingship, but he is the king of peace, of simplicity, of humility.

“Jesus is indeed making a royal claim,” Benedict writes. “He wants his path and his action to be understood in terms of Old Testament promises that are fulfilled in his person. The Old Testament speaks of him — and vice versa: He acts and lives within the word of God, not according to projects and wishes of his own.”

The narrative tells of the crowd covering the ground with their cloaks and palm branches as Jesus passed them by. This gesture is another that is fraught with symbolism and meaning from the Old Testament.

The spreading of cloaks and branches is an image of enthronement in the line of King David, hearkening back to 2 Kings 9:13 and 1 Maccabees 13:51: “The Jews entered the citadel with shouts of praise, the waving of palm branches, the playing of harps and cymbals and lyres, and the singing of hymns and canticles, because a great enemy of Israel had been crushed.”

As Jesus entered Jerusalem, another great enemy of Israel — the greatest enemy — was about to be crushed as well.

The people were overcome, shouting the words of Psalm 118, “which on their lips becomes a messianic proclamation,” Pope Benedict writes. Shouts of “Hosanna!” fill the air.

Over the course of Jewish history, the connotations of “Hosanna” developed from a prayer of supplication to one of praise, “joyful praise of God at the moment of the processional entry, hope that the hour of the Messiah had arrived, and at the same time a prayer that the Davidic kingship and hence God’s kingship over Israel would be re-established.”

Jesus has now entered the holy city of Jerusalem, and made clear the divine claim to kingship. His hour has come, and with it, the hour of our salvation — the salvation which God promised his people of old.

PREVIOUS: Discovering real treasure in the crucifixion of Jesus

NEXT: What ‘Hosanna in the highest’ really means