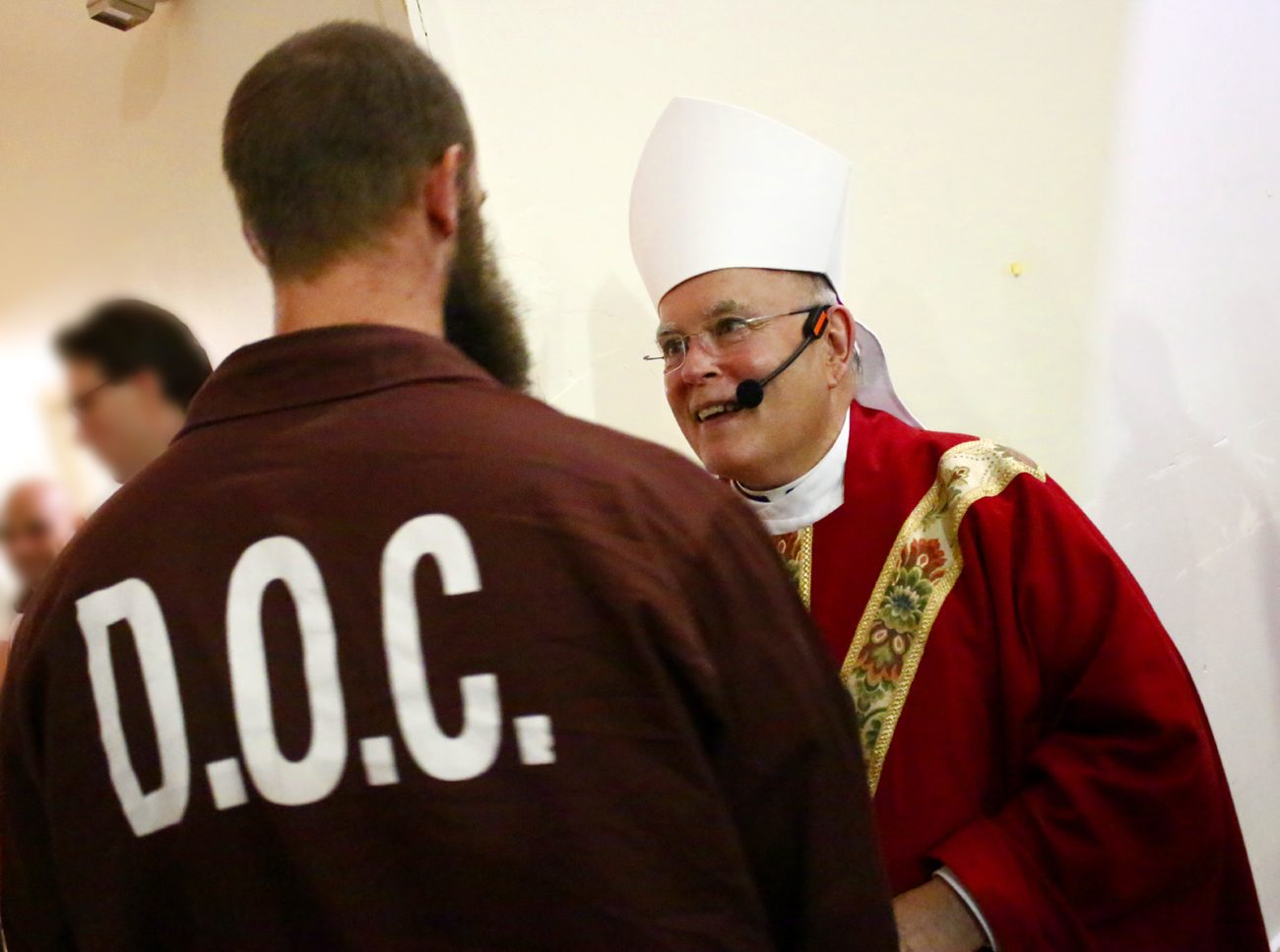 After celebrating Palm Sunday Mass April 8 at Graterford Prison in Schwenksville, Archbishop Charles Chaput chats with and offers a blessing to a young man who was to be released from the state prison the next day. (Sarah Webb) 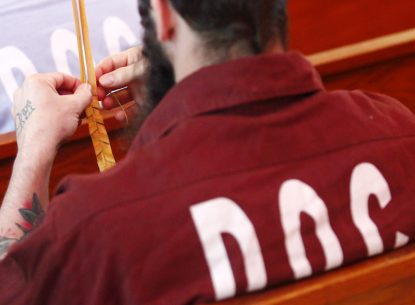 God is everywhere, even in a maximum security prison. He is certainly at the State Correctional Institution at Graterford, a 3,500-man maximum security facility in Montgomery County where Archbishop Charles Chaput had the privilege of celebrating Mass on Saturday evening, April 8.

Because it was the anticipatory Mass for Palm Sunday of the Passion of the Lord, the liturgy combined gladness and sorrow beginning with the blessing of the palms reminiscent of Christ’s joyous welcome into Jerusalem, and the Gospel reading of his passion and death on the cross.

“I’ve been impressed by your attention as well as your effort to be in the presence of God,” the archbishop told the more than 200 prisoners at the Mass.

“You have given me good example. Every one of you has suffered very much but at some time you have had happy high points in your lives,” the archbishop said in his homily. “For those who are in prison the heavy part in this is the sorrow, rather than the joy.”

The cross, he said, “is at the center of the Christian life. Most of us tend to think of the cross as a symbol of suffering, but that’s not what it is supposed to mean for us. Jesus did suffer on the cross for us, a horrible death, because he loved you and me.”

Returning to the theme of Christ’s triumphant entry into Jerusalem, and taking from an exhortation by St. Francis de Sales, Archbishop Chaput recommended to the prisoners three virtues exemplified by the donkey Jesus rode that day in Jerusalem — humility, patience and obedience, virtues applicable to all, not just the incarcerated.

Among the acolytes and readers at the Mass were three men who will receive baptism and confirmation at the Easter Vigil Mass. One of them was Shaun, who was not raised Christian although through contact with a grandmother in California he had not known, he discovered that part of his family was Catholic.

“This honors my family and the work the church does so beautifully,” he said. “I would like to be part of it when I go home.”

Richard, on the other hand, has been a long-time assistant at the chapel. “I love working at the chapel,” he said. “It keeps me connected to God.”

Shaun and Richard are not the exception, according to Father John Pidgeon, who has been the Catholic chaplain at Graterford for a year and a half. “I’ve met a lot of great men here who have changed their lives,” he said.

Prison ministry for Father Pidgeon is in some ways reminiscent of high school ministry, with men constantly moving somewhat like changing classes. But the heart of it is parish ministry, and it is very fulfilling for the chaplain.

There are usually 150 men at the weekend Mass and they attend other devotions during the week, including this week on Holy Thursday and Good Friday services, according to Father Pidgeon. And of course, the archbishop’s visit, his first to this particular prison, was special.

“The men and I are very excited to have him here, it’s a wonderful uplift to the morale here at Graterford,” Father Pidgeon said.

Cynthia Link, the superintendent of Graterford, thought Archbishop Chaput’s visit held a deep meaning to the inmates, the staff and to volunteer visitors.

“Truly there is restoration, there is hope; there is the possibility of redemption for everyone,” she said. “The fact that he is here and Father Pidgeon is here every day, as well as the volunteers, is important. This is a place where people need something to grab onto. It is vital.”

Not every prisoner at the Mass was Catholic, but for Rev. Rafael Torres, a Southern Baptist and program director of the facility’s chaplaincy, the Mass was excellent.

“It is good for the men who are here,” he said. “They are excited at what the archbishop had to say.”

As with Father Pidgeon, “the reward for me is to be able to see the men change and reform whenever they dedicate their lives to whatever faith they choose,” Rev. Torres said.

PREVIOUS: Justice Samuel Alito will speak at St. Charles Seminary in May

NEXT: Teens learn value of life from inspiring woman with Down syndrome