Jesuits aren’t the only ones teaching Ignatian spirituality 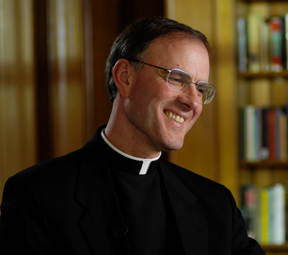 When one thinks of Ignatian spirituality, it is only natural that one connects it to the Jesuits – the Society of Jesus. After all, St. Ignatius of Loyola founded the Jesuits, and in fact many Jesuits are engaged in retreat work including the famous 30-day retreat based on the saint’s Spiritual Exercises.

Although Jesuit priests are active in many other areas, perhaps most notably in education, they are not alone in the field of promoting Ignatian spirituality.

Take for example the Oblates of the Virgin Mary, a relatively small congregation of priests whose work is almost exclusively as preachers and confessors based on the writings of St. Ignatius.

Father Timothy Gallagher, O.M.V., who has written no less than eight books on Ignatian spirituality and been featured in a television series and on discs, will be speaking at Daylesford Abbey, Paoli, on April 22 from 9 a.m. to 3 p.m.). His topic will be “Living the Discerning Life” (register here.).

Father Gallagher, who holds the St. Ignatius Chair for Spiritual Formation at St. John Vianney Theological Seminary in Denver, has an extensive international ministry of retreats, spiritual direction and teaching about the spiritual life and is a former provincial superior of the Oblates of the Virgin Mary.

His congregation, the Oblates, was founded in Italy in 1816 by Venerable Bruno Lanteri, who received his own spiritual formation from Jesuit Father Nicholas von Diessbach during the period when the Jesuits themselves were officially suppressed due to the complex politics of the church and of Europe in that era.

For the past 200 years the Oblates have been preaching Ignatian spiritualty and it is not just for priests and religious, Father Gallagher explains.

“We do get seminarians and priests, but it is open to everyone,” he said. “It goes very much for the lay vocation as well. It applies to the daily living experience of anyone who believes in the Lord Jesus and is trying to live the Christian faith.”

Everyone experiences ups and downs in their daily Christian lives, Father Gallagher explained. We can become discouraged. There are times when we feel very close to God and times we do not.

There really is no shame in that, he suggested; it’s just what happens in spiritual life. The difference is understanding it, naming it and what to do about it.

That’s where the Spiritual Exercises can help a person know what is of God and what is of the enemy, in the words of St. Ignatius, “the evil one.”

The teachings of St. Ignatius are more important than ever in this generation because today’s culture makes it so easy to get discouraged, Father Gallagher maintains.

Ideally this would be done through the traditional month-long Ignatian retreat, but that really isn’t a practical option for most people, Father Gallagher concedes, and there are many adaptions of it.

It can be a three-day, a five-day or an eight-day adaption or even an online retreat an hour a day with spiritual direction given once a week or so.

However it is done, “it’s a great spiritual experience and people generally return to their daily lives with new spiritual energy,” he said.

Writings by Father Timothy Gallagher can be found at timothygallagher.org and other online sites.

To reserve a seat for the Father Gallagher talk on April 22 see daylesfordabbey.org/occasions/living-the-discerning-life

NEXT: Sacred art works to be auctioned, sold this Saturday