Sacred art works to be auctioned, sold this Saturday 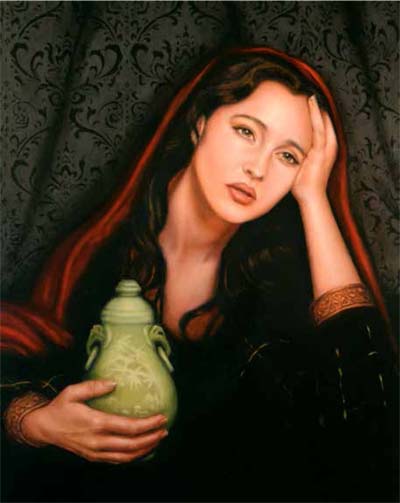 “St. Mary Magdalene,” by Kathleen Carr of Rockville, Md., is one of the featured works at an art sale and auction sponsored by the American Academy of the Sacred Arts.

A live sale and auction of mostly religious art, sponsored by the American Academy of the Sacred Arts, will be held at Neumann University, Aston, on Saturday, April 22 beginning at 1:30 p.m.

The art to be sold or auctioned includes works of 21 artists from around the country.

The American Academy of the Sacred Arts, which is headquartered at 1629 Porter Street in Philadelphia, was founded in 1993 by the late Sister Paula Beierschmitt, I.H.M. She was an accomplished artist in her own right who died in 2013.

One of her works, a bronze bust of St. Vincent Pallotti, can be found at the Basilica of the National Shrine of the Immaculate Conception in Washington, D.C. And a life-sized bronze statue of Our Lady of Guadalupe commissioned by the Academy, though not executed by Sister Paula, is currently on display at the Cathedral Basilica of SS. Peter and Paul in Philadelphia.

The art that is being offered, including one work of Sister Paula, has reserve prices ranging from thousands of dollars down to $50, according to William Maffucci, an attorney who is the interim president of the American Academy of Sacred Arts and a close supporter of the mission of Sister Paula for many years.

In addition to the auction artwork there are also a number of prints that will be offered for direct sale.

One does not have to be a bidder to attend the auction, according to Maffucci, one simply needs an appreciation of sacred art.

It is all in keeping with the founding purpose of the American Academy of the Sacred Arts: “A mission to discover our higher purpose, to glorify God through the creation and promotion of religious art, the facilitation of education outreach and the cultivation of ecumenical dialogue.”

A brochure of the art to be auctioned or sold and more information on the American Academy of the Sacred Arts can be found on the website aasacredarts.org.

The event at Neumann University will be held in the Bayada Atrium of the Mirenda Center, One Neumann Drive, Aston.

PREVIOUS: Jesuits aren’t the only ones teaching Ignatian spirituality

NEXT: New name, new energy to draw the young back into church