Mass for people with disabilities shows ‘a community of loving support’ 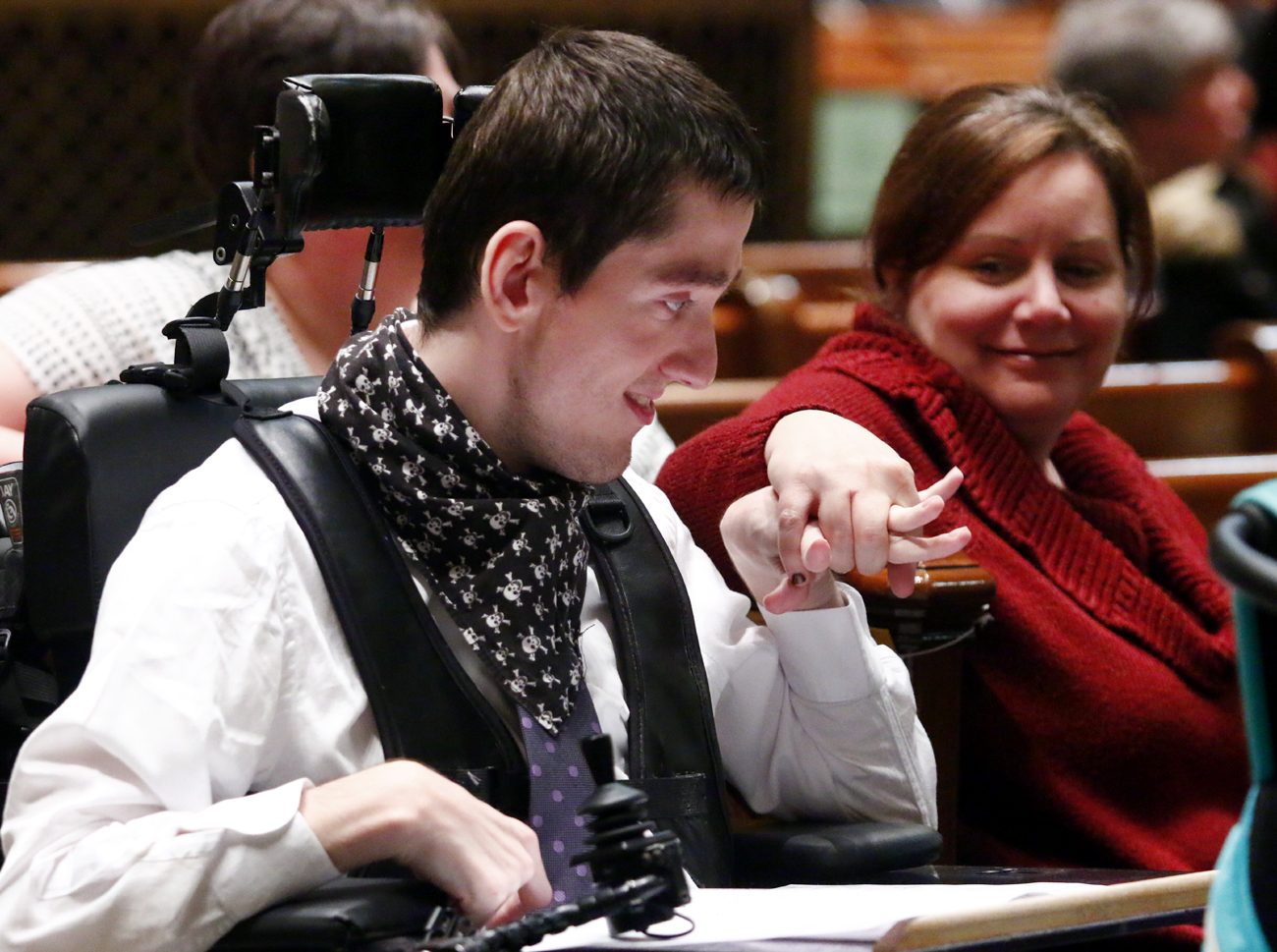 Greg from St. Edmond's Home for Children, the Rosemont facility operated by Catholic Social Services, is happy to hold Julia Vivanco's hand during the Mass honoring persons with disabilities April 1 at the Cathedral Basilica of SS. Peter and Paul. (Sarah Webb)

The Archdiocese of Philadelphia’s annual Mass honoring the gifts of persons with disabilities, the deaf community, along with family, friends and caregivers, held on Saturday morning April 1, was the fifth time for Archbishop Charles Chaput as celebrant and homilist.

(See a photo gallery from the Mass here and read about a new hotline for caregivers of people with intellectual disabilities, here.)

“When people ask me what I preach to a congregation like this I tell them I don’t, the congregation preaches to me,” he said at the outset. “This is really a manifestation of love in a very special way.”

Looking out at the multitude of wheelchairs, pews filled with the blind, the hearing impaired and those with mental disabilities, all accompanied by loving families and caregivers, his point was well taken.

“There is nothing about pretense, what is present here is humanity, beautiful in its own unique way, a community with loving support of one another,” the archbishop said.

Addressing the parents and guardians, he added, “You are the people who have kept the Word of God with generous hearts.”

Assisting especially with the men, women and children in wheelchairs was a group of students from nearby Roman Catholic High School, shepherded by Ed Keenan, class of 1954, who also oversees a program at Roman for visitation of aged shut-in alumni.

“I think the kids get a little more sensitive for people with great needs,” Keenan said of the event. “They learn how to interact and not fear people who are disabled.”

One of the concelebrants was Msgr. Richard Bolger, who was first sensitized to persons with disabilities though his own sister, who had Down syndrome.

“I think they are going straight to heaven because in their innocence, their acceptance, they are nonjudgmental,” he said. “Those are qualities we would love to have and struggle to have. Look at what these parents have to go through, their struggle to get here today, and their anxiety as parents, as they get older, for what is next for their children. It is a big concern.”

Many of the congregants with disabilities were coming from various schools and residences for the disabled, but not all. Carol and Rob Cardie of St. Francis of Assisi Parish, Springfield, were there with their two beautiful little adopted children, Tommy and Theresa, both with vision impairment caused by albinism. They were also there because their daughter Sarah, who does not have a disability, was one of the sign language interpreters for the Mass.

“We came on our own,” Carol said. “We enjoy being with people with disabilities. I’m glad we came.”

Among the organizers of the Mass was Immaculate Heart Sister Kathleen Schipani, who agreed that “it is great to see so many people turn out for this.”

The event will be part of the upcoming 25th anniversary of the official promulgation of the Catechism of the Catholic Church.

She and her committee need go no further than the catechism itself – no. 2276 says, “Sick or handicapped persons should be helped to lead lives as normally as possible.”

Through its many social services and the annual Mass, the Archdiocese of Philadelphia has been doing this for many, many years.