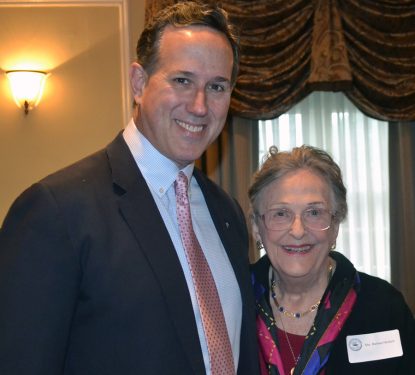 Some 150 friends and supporters of Regina Angelourm Academy in Ardmore are gathering to celebrate the school’s 10th anniversary on Tuesday, April 25. The event at McCall Golf and Country Club in Upper Darby honors the academy’s founder, Barbara Henkels, and features a keynote address by former Senator Rick Santorum.

He is expected to reference his experience working with Henkels’ late husband, Paul, to advance the Educational Improvement Tax Credit program that allows Pennsylvania businesses to allocate a portion of their state tax dollars to private education. Santorum will present Henkels with a gift of thanks from the school.

She is also receiving a citation from the Montgomery County Board of Commissioners, presented by Commissioner Joe Gale, who has noted the value of classical education in the formation of responsible, effective citizens.

The Henkels founded Regina Angelorum as the second of four independent Catholic classical Regina Academies to promote the time-tested model of classical education and fidelity to the Magisterium of the Catholic Church.

The schools, located in Ardmore, Abington, West Norriton and Ottsville, now educate almost 400 students in pre-K through eighth grade. The Regina Academies also include Regina Chesterton Academy at Cardinal O’Hara High School, which is a classical, secondary educational track that offers continuity to students trained in the classical model.

The model’s primary objective is to educate children to wisdom and virtue rather than employability, and to sensitize them to the so-called “transcendentals” of goodness, truth and beauty in the world around them.

The approach is characterized by the integration of subjects across the curriculum, a focus from the earliest grades on oral as well as written expression and careful attention to the evolving strengths of the children, referred to as the grammar, logic and rhetoric stages of development.

NEXT: Cathedral hosting devotions for Our Lady of Fatima, Padre Pio